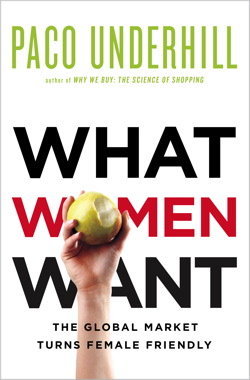 PACO UNDERHILL, the author of the hugely successful Why We Buy and The Call of the Mall, reports on the growing importance of women in everybody’s marketplace—what makes a package, product, space, or service "female friendly." Underhill offers a tour of the world’s marketplace—with shrewd observations and practical applications to help everybody adapt to the new realities.

As large numbers of women become steadily wealthier, more powerful, and more independent, their choices and preferences are transforming our commercial environment in a variety of important ways, from the cars we drive to the food we eat; from how we buy and furnish our homes to how we gamble, play, and use the Internet—in short, how we spend our time and money.

With the same flair and humor that made his previous books universally appealing, Underhill examines how a woman’s role as homemaker has evolved into homeowner and what women look for in a home. How the home gym and home office are linked to the women’s health movement and home-based businesses. Why the refrigerator has trumped the stove as the crucial appliance. How every major hotel chain in the world has redesigned rooms and services for the female business traveler. Why some malls, appealing to women, are succeeding while others fail. What women look for online and why some retail websites, like Amazon, attract women while other sites turn them off.

"The point is," writes Underhill, "while men were busy doing other things, women were becoming a major social, cultural, and economic force."

And, as he warns, no business can afford to ignore their power and presence.

"With wit, razor-sharp analysis and a better understanding of what women want than most of us have—or at least realize we have. It will make female consumers think differently about their shopping and, hopefully, encourage stores to sell a whole lot differently." — Jayne O'Donnell, USA Today

"It may still be a world ‘owned by men, designed by men, and managed by men,’ but sales guru Underhill argues that companies which fail to recognize women’s purchasing power will miss out on the consumer bonanza of the future. In this lively study, the author traces how middle-class women’s entrance into the workplace has reshaped everything from demand to design and reveals the future implications for consumer behavior as women of all classes outpace their male counterparts in college attendance. In a friendly, conversational style, Underhill discloses how the business landscape is being transformed to be safer, more accessible, and attuned to women’s wants such as houses that are designed with bigger, more open kitchens that can serve as ‘the unofficial domestic control center of a contemporary home.’… He makes a compelling argument that a failure to cater to women consumers with products, services, environments, and customer experiences that meet their expectations is just ‘bad business’." — Publishers Weekly

"That acknowledged genius-guru of retail marketing, Paco Underhill, provides witty and utterly convincing answers to one of the oldest questions in recorded history: what do women want? Not surprisingly, he learns what half of the human race—the female half—have sensed all along: nearly everything that men want, and a little more. Behind its utterly captivating and often amusing prose lurks a serious psychological and economic study, an essential guide for future trends. Not only should every woman want this book; so should every merchant, mall and visitor attraction." — Emily K. Rafferty, President, The Metropolitan Museum of Art

"Mr. Underhill once studied with the urban anthropologist William H. Whyte, and he has made his name as a purveyor of retail insights—those little (and sometimes large) strategies that companies can pursue to turn idle browsers into active shoppers. He revealed some of his discoveries in WHY WE BUY, which drew on his two decades of observing the in-store traffic patterns and buying preferences of consumers. Among that book's lessons: Most shoppers turn right when they enter a store; and women find narrow aisles rather creepy. Mr. Underhill also runs a consulting firm, Envirosell, which advises clients such as Target, Wal-Mart and Estee Lauder…. In WHAT WOMEN WANT, Mr. Underhill shows himself to be both an amiable and a knowledgeable guide to the shifting retail landscape." — Meghan Cox Gurdon, The Wall Street Journal

"When this book was first published last year, it created quite a stir. With insight, wit, and a crisp narrative, retail guru Paco Underhill revealed how woman’s growing independence and economic clout have changed almost every aspect of the way we buy and the way we live. Some of his findings were and are rather startling…. Underhill, CEO of Envirosell, Inc., a global consulting firm, traveled throughout the world to document the expanding cultural, social, and economic influence of women everywhere." — Larry Cox, Tucson Citizen