The Field of Fight 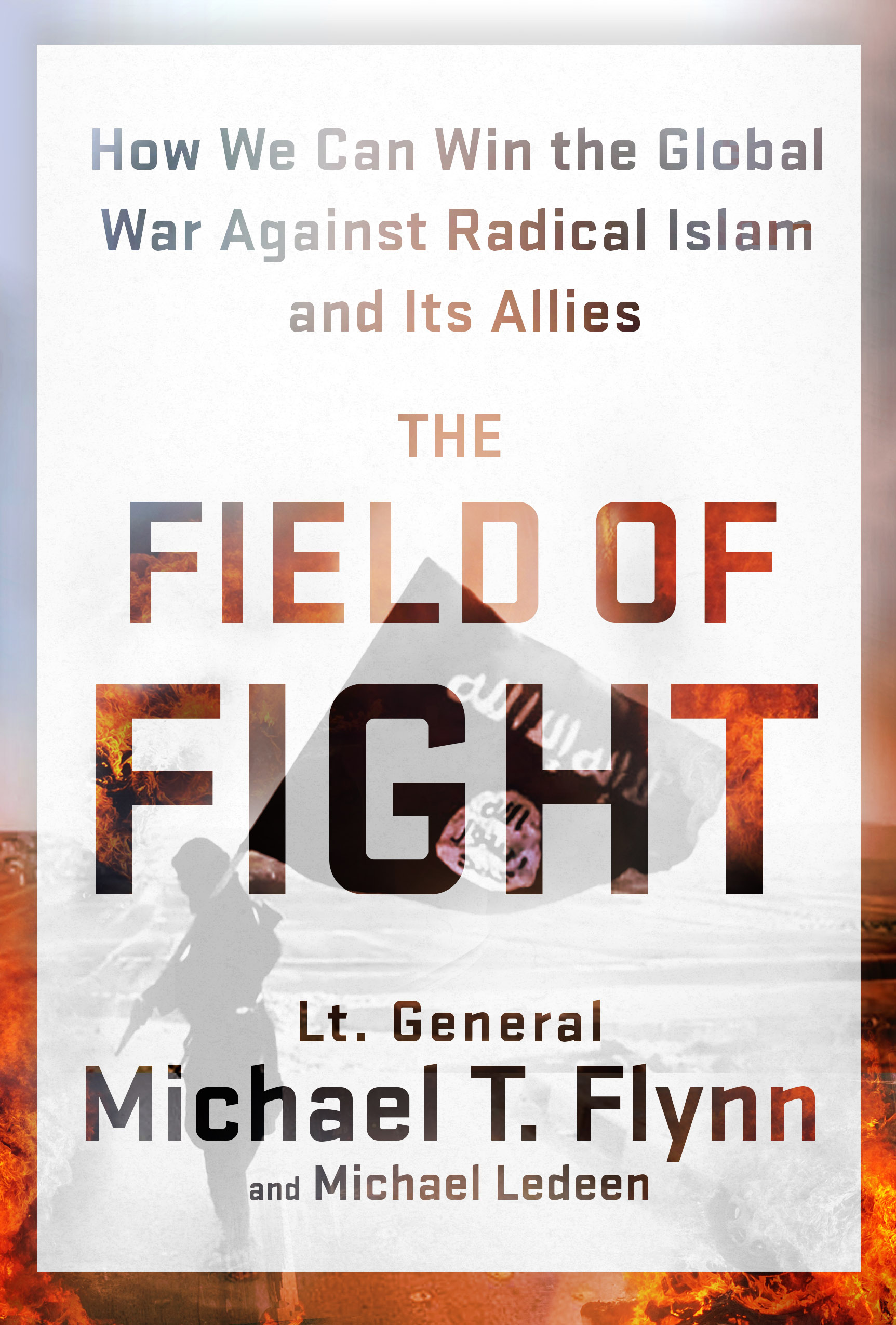 Ten years ago we found evidence that al-Qaeda was far more organized and adept than we had previously given them credit for. It took us nearly that long to locate and execute their leader, Osama bin Laden, and we are far from finished. Al-Qaeda has morphed into a much more dangerous, menacing threat: ISIS. A war is being waged against us by radical Islamists, and, as current events demonstrate, they are only getting stronger. This book aims to inform the American people of the grave danger we face—and will continue to face—until our government takes decisive action against the terrorists that want nothing more than to destroy us and our way of life.

Lt. General Michael T. Flynn spent more than 33 years in Army intelligence, working closely with Generals Stanley McChrystal and David Petraeus, Admiral Mike Mullen, Director of National Intelligence James Clapper, and other policy, defense and intelligence community, and warfighting leaders. From coordinating on-the-ground operations in Iraq, Afghanistan, and elsewhere, to building reliable intelligence networks, to preparing strategic plans for fighting radical Islam, Flynn has been a firsthand witness to government screw-ups, cover-ups and censored information that our leaders don’t want us to know. A year before he was scheduled to retire, Flynn was sacked as Director of the Defense Intelligence Agency for, among other things, telling a Congressional Committee that the American people are in more danger than we were just a few years ago. Why?

The Field of Fight succinctly lays out why we have failed to stop terrorist groups from growing, and what we must do to stop them. The core message is that if you understand your enemies, it’s a lot easier to defeat them?but because our government has concealed the actions of terrorists like bin Laden and groups like ISIS, and the role of Iran in the rise of radical Islam, we don’t fully understand the enormity of the threat they pose against us.

A call to action that is sensible, informed, and original, The Field of Fight asserts that we must find a way to not only fight better, but to win.

"I highly recommend the just out book - THE FIELD OF FIGHT - by General Michael Flynn. How to defeat radical Islam." — Donald J. Trump

"If you wish to understand the terrorist attacks sweeping the world, there’s no better place to start than The Field of Fight: How We Can Win the Global War Against Radical Islam and Its Allies, by Lt. General Michael Flynn and historian Michael Ledeen. With terrorist attacks in past months all over the world, including Orlando, Nice, and Baghdad, it’s imperative that average Americans know what is going on, who is behind these crimes, and what we can do to stop them. This is a book that both Donald Trump and Hillary Clinton should read and give to their military advisers. In a few months, one of them will be president, and the burden to defend America will be on his or her shoulders…. The book contains bad news and good news. The bad news is that we are in a real war against clever and committed enemies, and we are in danger of losing. The good news is that if our leaders have the will, the plan, and the financial commitment, then America can win. The course of history depends on the next president." — Diana Furchtgott-Roth, The National Review

"As a former intelligence officer, I highly recommend this book. The author provides a clear picture of the current threats America is now facing and will continue to face if we do not seek the truth from our leadership. If political correctness outweighs the importance of eliminating the real threat of radical Islam and the enemy alliance, the fighting will only continue indefinitely. Radicalized Muslims do not need hugs and love like AG Lynch recently suggested. Americans deserve to know the truth about legitimate threats and not have it censored for our own protection. We can no longer continue the charade of false success in the war against radical Islam and its allies." — Desiree Huitt, SOFREP (Special Operations Forces Report) News

"Six Books the Next U.S. President Must Read: #5. The Field of Fight by Michael T. Flynn and Michael A. Ledeen. In a straightforward, no-nonsense assessment of the Islamist global insurgency and how to crush it, General Mike Flynn, the former head of the Defense Intelligence Agency, and Michael Ledeen, a scholar at the Foundation for the Defense of Democracies, collaborated on this 2016 book that takes the challenge head-on. Americans want a president that takes defeating America's enemies seriously. If they know their president is reading this, they'll know that person is on the job." — The National Interest

"The fact that Trump has brought retired Army Lt. Gen. Michael Flynn onto his national security team is a very positive sign. Flynn, along with just a few other senior military leaders, has demonstrated a deep understanding of the security challenges that terrorist, criminal and insurgent networks pose to the nations of the world. When he headed the Defense Intelligence Agency from 2012 to 2014, he made a point of engaging in network-building by trying to get analysts out of their cube farms to work more closely and directly with forces in the field. Naturally, this desire ran counter to the habits of mind and institutional interests of establishment thinkers, and caused much friction. Thus the network he envisioned never fully formed — a serious problem in an era in which the old dynamic of arms races to build nuclear weapons has been superseded by ‘organizational races’ to build networks. If Trump is elected president in November, then Flynn’s vision of building networks to fight enemy networks will no doubt get a big boost from the new commander in chief. After 15 years of floundering in military and security policy, this would make for a very welcome, much needed change. If Hillary Clinton wins the election, I suggest that she take a long look at Flynn as well. The country needs his sort of ideas." — John Arquilla, San Francisco Chronicle

"Field of Flight, a new book Flynn co-wrote with historian Michael Ledeen, argues that America is up against a global alliance between radical jihadis and anti-American nation states like Russia, Cuba and North Korea. They say this war will last at least a generation. And they say it will require outside ground forces to go after al Qaeda and the Islamic State as well as a sustained information campaign to discredit the ideology of radical Islam.…. In this sense, the authors are not really arguing that America should be in a shooting war with all of the countries that don't like America, and with radical Islam. Instead, they call for a kind of two-track approach. On the battlefield, they call for more tactical alliances with regional countries against the Islamic State and al Qaeda. But another component is a political war. Specifically, they say the next president should wage an ideological campaign to discredit both radical Islam, but also the dictatorships that oppose the west. To the skeptical reader this broad campaign may sound like a recipe for endless war. But Obama's alternatively narrower and discrete war has landed in the same place. Despite Obama’s best efforts to phase out Bush’s war on terror, his successor will inherit it nonetheless. Flynn and Ledeen argue the next president should go big and try to win it." — Eli Lake, BloombergView

"General Flynn's The Field of Fight is as good an introduction to the long war we are in as any I have read. It is also a sobering and indeed frightening indictment of the intellectual dishonesty which has blocked our leaders from winning this war." — Newt Gingrich

"The Field of Fight is a must-read for all Americans, especially military and law enforcement. It is a seminal book in the global war against radical Islam! Where are the fatwas from Mecca and Medina?!" — Lt. General (Ret.) Tom McInerny, former Deputy Chief of Staff, United States Air Force

"The Field of Fight is a book worth reading by anyone concerned about the future security of America. It is both an engaging personal memoir by a great American soldier and military intelligence officer, General Mike Flynn, and a strategic plan by General Flynn of how to win the global war against radical Islam and its big power supporters. The leaders of the next American administration would benefit from reading The Field of Fight." — Senator Joseph Lieberman