The Forum and the Tower

How Scholars and Politicians Have Imagined the World, from Plato to Eleanor Roosevelt 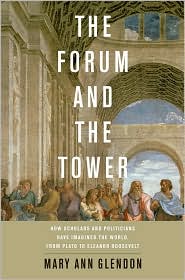 The Forum and the Tower focuses on the relationship between the academy and the world of politics. Ideas do in fact have consequences, and the ivory tower is not so remote from ‘the real world’.  The translations of ideas into action can result in severe distortions of original meaning, but ideas and revolutionary political and social change are intertwined.  Mary Ann Glendon, Learned Hand Professor of Law at Harvard Law School and former U.S. Ambassador to the Vatican, traces this crucial relationship, with chapters on Plato, Cicero, Justinian, Machiavelli, Hobbes, Coke, Locke, Rousseau, Burke, Tocqueville, Weber, Holmes, and the 1948 Universal Declaration of Human Rights.  Her aim is to utilize history to show how intellectuals and politicians can work productively.

"As Aristotle noted long ago, two very different and sometimes incompatible ways of life—the political and the philosophical—exert a powerful pull on the ambitious and talented members of any society. Mary Ann Glendon, who teaches at Harvard Law School, says that she sees this double attraction in her students. Some go into politics, but many turn away, fearful of the compromises and corruptions of power. Such students may go on to become teachers and scholars, but they never quite give up on the idea of ‘making a difference’ in the wider, public world, even if they aren’t quite sure how to do it. Ms. Glendon’s The Forum and the Tower profiles 12 figures in Western history who struggled—not always successfully—with the conflict between an active life and a contemplative one, between ‘life in the public forum and life in the ivory tower.’... The Forum and the Tower is a wise exploration of the eternal tension between action and thought." — Brian C. Anderson, The Wall Street Journal