The Ghost at the Feast 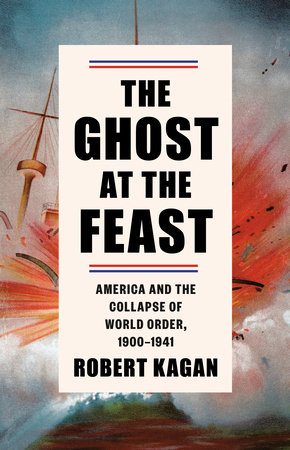 A comprehensive, sweeping history of America’s rise to global superpower—a follow-up to the author’s acclaimed first volume, Dangerous Nation, on our nation’s earliest days to the dawn of the twentieth century.

At the turn of the twentieth century, America was at a tipping point: its population and wealth were growing rapidly, and the country had entered the world stage as a commanding political, economic, and military force. Would America retreat within their own relatively secure and geographically separate borders, or would it continue to expand its influence on an international scale?

Beginning with the “honorable” Spanish-American War and ending with the wreckage of World War II, Robert Kagan tracks how America’s desire to be an arbiter of peace as a young democracy has conflicted with its desire to stay neutral. Kagan shows how this moral high ground has led to mistakes and acts of ruthless ambition, but he also argues that America’s hesitation to intervene in foreign affairs has allowed fascism and tyranny to grow unchecked. Brilliant and insightful, The Ghost at the Feast strips away any illusion that America can be an isolationist country, tracing the stunningly quick dissolution of European control and the emergence of a new world order with America at its helm.

"A professional historian’s product through and through, sharply focused on its period and supported by amazingly detailed endnotes, plus a huge bibliography. Mr. Kagan’s account is probably the most comprehensive, and most impressive, recent analysis we have of how Americans regarded the outside world and its own place in it during those four critical decades." — Paul Kennedy, The Wall Street Journal

"A broad-ranging history of America’s early evolution as a world power, a more deliberate process than is often supposed. In this second volume of the Dangerous Nation trilogy, Kagan writes that late-19th-century America was a kind of conservative paradise. With a tiny military to support, taxes were low, and isolation ‘meant less need for strong central government, less military bureaucracy, and less need for speedy and efficient decision-making.’... An insightful study of the birth of the American empire and the resulting ‘American century’." — Kirkus Reviews (starred review)

"To succeed in its foreign policy, a nation needs history and self perception. With extraordinary range and research, Robert Kagan has illuminated America’s quest to reconcile its new power with its historical purpose in world order in the early twentieth century. The Ghost at the Feast will influence America’s self-perception for years to come with its lucid analyses and thoughtful perspectives." — The Hon. Henry Kissinger

"With a facility for clear and cogent prose, Kagan is determined to prove that, far from exemplifying an isolationist approach to world affairs long proclaimed by many scholars, Americans have gathered and deployed massive strength to shape the international system to their liking. And yet, in spite of this spirited pursuit of power, Americans have seldom been happy in its possession or comfortable in its use.... Kagan’s treatment of the various motives underpinning America’s entry in the First World War is exemplary....The Ghost at the Feast is thus essential for statesmen who acknowledge American ambition without hypocrisy." — Brian Stewart, Commentary