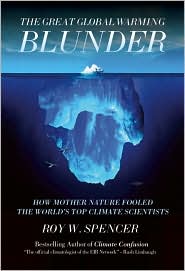 The author of the best-seller Climate Confusion unveils new scientific evidence that explodes the conventional wisdom on climate change and reshapes the global warming debate. Roy W. Spencer, a former senior NASA climatologist, reveals how climate researchers have mistaken cause and effect when analyzing cloud behavior and have been duped by Mother Nature into believing the Earth’s climate system is far more sensitive to human activities and carbon dioxide than it really is. In fact, Spencer presents astonishing new evidence that recent warming is not the fault of humans, but the result of chaotic, internal natural cycles that have been causing periods of warming and cooling for millennia. As misguided global warming policy proposals threaten the lives of millions of the world’s poorest, most vulnerable citizens, The Great Global Warming Blunder is a scintillating exposé and a much-needed call for debate.

"Speaking of global warming, I gotta get in a plug here for Dr. Roy Spencer and his new book. He's our official climatologist. It's a great cover. The cover of this book is just superb. It's called The Great Global Warming Blunder. About peer-reviewed and soon-to-be-published research that Dr. Spencer is engaged in which supports the opinion that a majority of Americans already hold, and that is that warming in recent decades is mostly due to a natural cycle in the climate system, not to an increase in atmospheric carbon dioxide from fossil fuel burning…. The climate research community long ago took the wrong fork in the road. Dr. Spencer is afraid it might be too late for them to come back so he's written the book. He's not under any illusion the book will settle scientific debate. In fact, he's looking to genuinely start it, because what has transpired to date is not debate. It's been political propaganda and indoctrination. So the book is The Great Global Warming Blunder…. It's just a great, great, great cover—and, of course, what's between the cover, front and back also superb as well." — Rush Limbaugh, The Rush Limbaugh Show, April 20, 2010