The Sweeping History of Ancient Greece as Told by Its First Chroniclers: Herodotus, Thucydides, Xenophon, and Plutarch 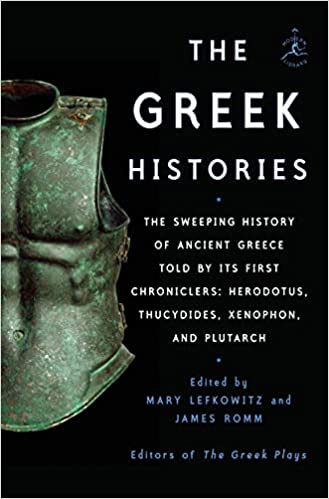 From the leading scholars behind The Greek Plays, this handsome book is a collection of the best translations of the foremost Greek historians, presenting a sweeping history of ancient Greece as recorded by its first chroniclers

The historians of ancient Greece were pioneers of a new literary craft; their work stands among the world’s most enduring and important legacies and forms the foundation of a major modern discipline. This highly readable edition includes new and newly revised translations of selections from Herodotus—often called the “father of history”—Thucydides, Xenophon, and Plutarch, the four greatest Greek innovators of historical narrative. Here the reader will find their most important, and most widely taught, passages collected in a single volume. The excerpts chart the landmark events of ancient Greece and provide a comprehensive account of the entire classical Greek age.

From the start the Greek historians demonstrated how broad and varied historical writing could be and brought their craft beyond a mere chronicle of past events. This volume explores each author’s interest in religion, leadership, character, and the lessons of war. How, for instance, should readers interpret Herodotus’ inclusion of speeches and dialogues, dreams, and oracles as part of the “factual” record? What did Thucydides understand about human nature that (as he said) stays constant throughout time? How did Plutarch frame historical biography as a means of depicting the moral qualities of great men?

Complete with introductions to the works of each historian, footnotes providing context and explaining obscurities, maps, and an appendix on the Greek conduct of war, this volume is an invaluable resource for students and passionate readers of history alike.

"The tried and tested team of Lefkowitz and Romm have done it again. After their The Greek Plays comes this equally judicious selection, sparely but serviceably commented, from three of the major ancient Greek historians and the doyen of ancient historical biography. Translated by diverse hands and covering the three centuries from the 6th to the 3rd BC, the readings informatively and entertainingly embrace some of the most momentous events of the ancient Hellenic world, from Cyrus of Persia to Alexander of Macedon, Greece—and Persia." — Paul Cartledge

"The Greek Histories is fascinating, as it allows the ancient Greeks to speak for themselves, without the lens of distance.... This incredible volume is an introduction that allows the modern reader to get a unique perspective of history." — David Arndt, Fredericksburg Free Lance Star  (Read the full review)