The Battling Brothers of Battle Creek 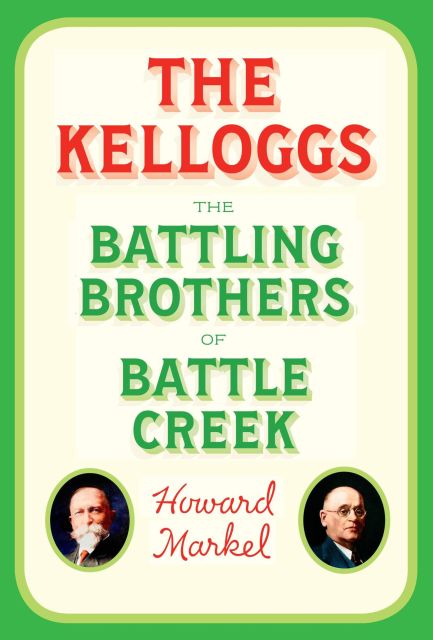 The story of the two Kellogg brothers is a fascinating part of American history.  One became America's most beloved physician between the mid-nineteenth century and World War I, a best-selling author, lecturer, and health magazine publisher, and founded the world-famous Battle Creek Sanitarium. The other founded the Kellogg Company and became one of the world's richest men.

In The Kelloggs, Howard Markel tells the saga of these two extraordinary men whose lifelong competition with each other changed notions of health and nutrition and helped alter the course of American medicine.

His brother, Will, who with John experimented on malt, wheat, and corn meal to make a product he called corn flakes, saw the cereal as a potential gold mine, especially after John's former patient, C.W. Post, stole the Kellogg recipes and started his own food company. His Post Toasties, Grape Nuts, and Postum were devoured by millions, and the Postum Cereal Company eventually became General Foods.

Success brought enmity between the brothers, and Markel describes their varied fortunes in an unforgettable tale of American drive and industriousness.

"Magnificent.... This is the best sort of biography, one that reveals the dialectic between, in this case, two individuals and their historical circumstances, between their contribution (for better or worse) and the times that gave rise to them." — Katherine A. Powers, Literary Hub  (Read the full review)

"The Kelloggs, is a serious and in every way commendable book — in its painstaking research, its superb prose and storytelling, and most importantly, its energy and spirit…. Chapter by chapter, in one finely crafted paragraph after another, Markel holds your interest. The Kelloggs is a highly satisfying book, a cultural history in the best tradition of…how one seemingly incidental element of a period can illuminate a whole society and its shifting tastes and values." — David Walton, The Dallas Morning News  (Read the full review)

"Study your Corn Flakes in the morning and you may be hard pressed to see them as the product of high drama. But as biographer Howard Markel reveals, ferocious fraternal rivalries went into their creation. Markel's new book, The Kelloggs vividly recounts the contentious story of two men behind the early 20th century's revolution in ready-to-eat foods…. The book is lively throughout as it delivers a tale both personal in its intensity and grand in its scope." — Michael Upchurch, Chicago Tribune  (Read the full review)

"Markel, the author of three previous, well-received histories has, by reaching into a simple box of cornflakes, come up with a rich and satisfying account of the lives, work and enmity of two warring brothers and of a pivotal epoch in American history." — Katherine A. Powers, Newsday  (Read the full review)

"The story of an epic lifelong feud between the Kellogg brothers is a compelling yarn and a fascinating window into the genesis of both modern medicine and management…. Howard Markel paints a vivid portrait of the brothers and their era. The period from the late 19th to early 20th century was one of breathtaking scientific and economic advancement, and each Kellogg played an important role in spawning and exploiting these developments…. The Kelloggs tells a good story of how an epically dysfunctional family produced two monumentally successful institutions." — Jonathan A. Knee, The New York Times  (Read the full review)

"A dual biography of the highly successful Kellogg brothers, who ‘fought, litigated, and plotted against one another with a passion more akin to grand opera than the kinship of brothers.’ One brother invented Corn Flakes, and the other was the most famous doctor of his time. They hated each other. Readers who suspect their lives might provide entertainment will not be disappointed by this delightful biography by Markel. In 1876, physician John Harvey Kellogg (1853-1943) took charge of a small Battle Creek sanitarium that followed Seventh-Day Adventist principles of vegetarianism and abstinence from tobacco and alcohol. A charismatic promoter and author, he vastly expanded the sanitarium and became a world-famous media doctor. His advice represented a vast improvement over 19th-century practices of infrequent bathing, excessive use of alcohol, and a diet heavy on meat, fat, and sugar. He was prescient in advocating exercise, clean water, stress reduction, and plenty of sleep but also relentless enemas, as little sex as possible, and absolutely no masturbation. No businessman, John hired his brother Will Keith Kellogg (1860-1951) to manage the enterprise, rewarding his efficiency with low pay and no respect. It was only in 1906 that 46-year-old Will escaped, launched the Kellogg Company, and made a fortune. John responded with more than a decade of lawsuits and a lifetime of sniping. Markel refreshingly resists the temptation—not resisted by films and novels—to deliver caricatures. Embracing scientific medicine, John was a skilled, respected surgeon who was charitable and uninterested in riches. Will was a brilliant entrepreneur, a considerate boss, and founder of a world-class humanitarian foundation. The author effectively shows the brothers’ ‘remarkable success was mutually dependent if not outright synergistic.’ A superb warts-and-all account of two men whose lives help illuminate the rise of health promotion and the modern food industry." — Kirkus Reviews (starred review)

"Markel tells the turbulent tale of ‘The Cain and Abel of America’s Heartland’: Dr. John Harvey Kellogg and his younger brother Will Keith Kellogg. They endured a symbiotic and cut-throat fraternal relationship. The bickering brother’s food fights involved years of lawsuits. Both survived into their nineties without ever reconciling, yet they are forever linked to revolutionizing breakfast with ready-to-eat cereals, particularly Kellogg’s Corn Flakes. Physician John was brilliant, narcissistic, and temperamental. He advocated ‘biologic living,’ a holistic approach to wellness and longevity, and was obsessed with body cleanliness and bowel movements. He was a prolific writer, inventor of medical devices, and creator of many new food products who also performed over 22,000 operations and founded the Battle Creek Sanitarium in Michigan (a hospital-spa-hotel complex). Will, a lonely man with exceptional organizational skills, business acumen, and a strong work ethic, toiled for his brother for decades before becoming a titan in the food industry. He was a mass-marketing genius and a philanthropist. Markel’s amazing amalgamation of biography and history, covering the pursuit of health in late-nineteenth- and early twentieth-century America, industrialism, and the invention of cold cereals is adorned with fetching photographs and illustrations. Sibling rivalry has rarely been so dastardly and delectable." — Tony Miksanek, Booklist (starred review)

"The Kelloggs: The Battling Brothers of Battle Creek is the first and last word on the siblings who made a fortune in health and food manufacturing. And battle they did.... Markel has dived deep into archives and brings an impressive knowledge of American cultural and food history to his account." — Matthew Price, Boston Globe  (Read the full review)

"Markel, an M.D., Ph.D. and a medical historian, brings both men to life, especially John, with his white suits, celibate marriage, dietary obsessions and embrace of the now discredited field of eugenics. Markel’s at his best writing about medicine, and his accounts of 19th- and early 20th-century hospitals and treatments will make you very glad you live in the 21st." — Mary Ann Gwinn, Seattle Times  (Read the full review)

"For 60 years, John Harvey Kellogg—prescient and kooky—was the most famous doctor in America. His life’s work was intertwined with that of his younger brother, Will, who helped run the San before starting the Kellogg cereal company. Their dramatic, poignant family saga is well told by medical historian Howard Markel in The Kelloggs. Jealousy, mistrust, and meanness strained their relationship: They sued each other over the cereal company (Will prevailed); took credit separately for shared accomplishments; and, Markel writes, spurred each other on to greater success than they might have otherwise achieved." — Susan Berfield, Bloomberg News

"In The Kelloggs, Howard Markel, a physician and professor of the history of medicine at the University of Michigan, tells the fascinating (and intertwined) stories of the brothers, who, it turns out, hated one another…. As Markel examines a rivalry that lasted for 70 years (and made its way into boardrooms and courtrooms), he illuminates medical, nutritional and business practices in the United States at the turn of the 20th century, and the ways in which John and Will were — and were not — men of their times. Breaking with conventional wisdom, Markel reveals, John Kellogg insisted that his patients move about as soon as possible after surgery, and remain hydrated. He warned that fashionable, tight-fitting corsets caused muscle injuries, poor posture, and damage to digestive and reproductive organs. Published in 1922, his book Tobaccoism, or How Tobacco Kills, maintained that cigarette smoking is addictive. Equally prescient were his advocacy of psyllium as a laxative, his studies of soy milk as a treatment for bowel problems in infants, and his role in developing bran cereals, fiber bars and nut foods…. Markel documents the substantial and destructive character flaws and errors of judgment of each of the two brothers. More importantly, he gives them their due." — Glenn C. Altschuler, San Francisco Chronicle  (Read the full review)

"In this rollicking tale of family intrigue and inventiveness, Howard Markel traces the lives of the Kellogg brothers, describing how they started the world down the path to packaged foods. This full exegesis of their unseemly personalities makes for a riveting read." — Andrew Solomon

"The story of the Kellogg Brothers is the story of innovation, of determination, and the creation of a giant industry as American business came of age just prior to the Second World War. It is a tale of grit, controversy, faith and the emergence of the 'wellness' movement. In the hands of Markel, a trained historian, physician, seasoned writer and chronicler of America, this tale comes alive. A fabulous read." — Abraham Verghese

"Markel’s The Kelloggs recounts the incredible exploits of the amazing Kellogg Brothers—John and Will—who turned nineteenth-century medicine upside down for the better. Markel does a marvelous job recounting the birth of the Kellogg cereal empire and the Battle Creek sanitarium. An amazing American story!" — Douglas Brinkley

"Howard Markel’s riveting, deeply researched new book covers vast territory: the saga of the squabbling Kellogg brothers (‘magnificent showmen, resolute empire builders, and unwavering visionaries’), their mass-branding of breakfast cereals, their concept of ‘wellness’, and their enormous influence on the diet of millions of Americans. This book arrives at a pivotal moment in our own history when mass-marketing, showmanship and the media deserve particularly deep study. Markel’s incandescent scholarship and his incisive analysis shine through this book. The Kelloggs can certainly be read as a biography of two visionaries (and their extended families), but it also deserves to be read as a case study by generations of future readers." — Siddhartha Mukherjee