The Shadow of a Great Rock

A Literary Appreciation of the King James Bible 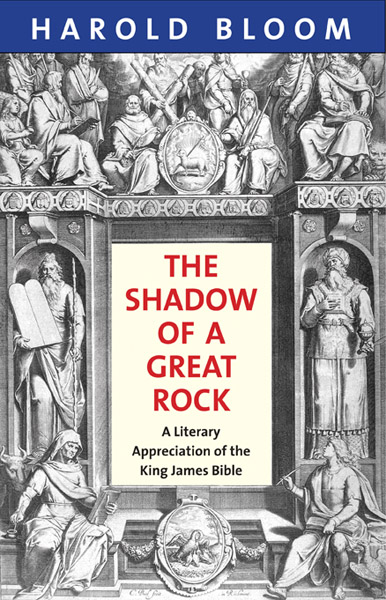 2011 is the 400th anniversary of the publication of the Authorized King James Version of the Bible.  Its importance to the development of English language and literature can hardly be overstated, and in The Shadow a Great Rock, Harold Bloom brings his formidable knowledge to an understanding of its literary richness.

Bloom sees the King James Bible standing alone with Shakespeare at "the sublime summit of literature in English."  He calls it an "inexplicable wonder" that a group of writers could bring forth such a magnificent work of literature, and credits William Tyndale as their fountainhead.  Reading the King James Bible alongside Tyndale's Bible, the Geneva Bible, and the original Hebrew and Greek texts, he highlights how the translators and editors improved upon—or diminished—the earlier versions. This is another exciting foray into Biblical studies by the author of The Book of J, Jesus and Yahweh, Fallen Angels, and The American Religion.

"Bloom's impassioned, daringly personal appreciation comes at a moment when the King James text as a basic cultural resource is doubly threatened. From one side, fundamentalists, with their insistence on a narrow literal reading of the Bible, are increasing. From another, politically correct educational bureaucrats, in the patronising, mistaken belief that a 'newer' Bible will widen access, have scrapped the KJB—and with it the aesthetic strength that declares the Bible to be poetry, not dogma. Bloom's book answers them both. Bloom, pre-eminent Shakespeare scholar and author of anti-theoretical criticism such as How to Read and Why, argues that the KJB belongs with Shakespeare as 'the culmination of one strand of Renaissance English culture', and approaches it with the recalcitrant insistence on character, plot and language that he brings to his discussions of the Bard…. Product of decades of thought, this is an old man's book—wise while verging on the sentimental, pared down yet also self-indulgent, sometimes belligerent or desperate—whose overarching message should resonate nevertheless with readers of all generations." — Jackie Wullschlager, Financial Times

"Bloom moves adroitly between the KJB and the earlier translations of Tyndale and Coverdale.... Readers also benefit from illuminating comparisons with the Geneva Bible (which the KJB supplanted), with the Tanakh (or Hebrew Bible), and with the Greek New Testament, so acquiring a deep appreciation for the compelling narrative the KJB delivers.... Bloom yields to the KJB’s literary splendor—and invites readers to join in his surrender." — Booklist (starred review)

"Setting aside 'all questions of truth or of how to live,' he unpacks the aesthetic qualities of the KJB in a charmingly idiosyncratic manner, intermittently comparing the KJB to the Tyndale and Geneva Bibles. Reading the deeply informed opinions of an experienced literary critic, readers learn tantalizing tidbits of Hebrew vocabulary, face the New Testament's anti-Semitism, and see the KJB’s ineluctable effects on Western literature.... Bloom’s erudite mix of acerbic judgments (e.g., the New Testament's literary ugliness) and awed delight ('the biblical David is an incarnate poem') offers readers a fresh take on an old book." — Publishers Weekly