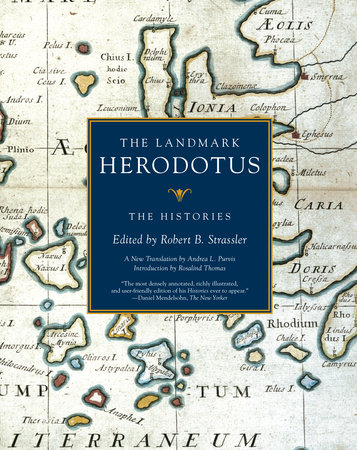 Herodotus was a Greek historian living in Ionia during the fifth century BC. He traveled extensively through the lands of the Mediterranean and the Black Sea and collected stories, and then recounted his experiences with the varied people and cultures he encountered. Cicero called him "the father of history," and his only work, The Histories, is considered the first true piece of historical writing in Western literature. With lucid prose that harks back to the time of oral tradition, Herodotus set a standard for narrative nonfiction that continues to this day.In The Histories, Herodotus chronicles the rise of the Persian Empire and its dramatic war with the Greek city-states. Within that story he includes rich veins of anthropology, ethnography, geology, and geography, pioneering these fields of study, and explores such universal themes as the nature of freedom, the role of religion, the human costs of war, and the dangers of absolute power. Ten years in the making, THE LANDMARK HERODOTUS gives us a new, dazzling translation by Andrea L. Purvis that makes this remarkable work of literature more accessible than ever before. Illustrated, annotated, and filled with 127 maps, this edition also includes an introduction by Rosalind Thomas and twenty-one appendices written by scholars at the top of their fields, covering such topics as Athenian government, Egypt, Scythia, Persian arms and tactics, the Spartan state, oracles, religion, tyranny, and women.Like THE LANDMARK THUCYDIDES before it, THE LANDMARK HERODOTUS is destined to be the most readable and comprehensively useful edition of The Histories available.

"The Best Book of 2007.... Herodotus is the starting point for understanding two-and-a-half millennia of Western history.... This massive volume, with a new translation by Andrea L. Purvis and introduction by Rosalind Thomas, reintroduces us to the Greek author and explorer of the fifth century before the common era who was the progenitor not just of history but of what we would today call journalism, ethnography, geography, and political science. With 21 appendices and 127 maps, Mr. Strassler and his trans-Atlantic colleagues make the breadth and depth of this classic work accessible to a new generation of readers—amateurs and scholars alike." — Robert Asahina, The New York Sun

"A richly gilded new translation.... Like a Global Positioning System for Herodotus' world.... A first rate achievement. Nothing is missing.... You cannot help but leave this work deeply edified." — Brendan Boyle, The New York Sun

"Robert B. Strassler pulled off a surprise best seller a decade ago with THE LANDMARK THUCYDIDES. He follows up with THE LANDMARK HERODOTUS, a richly annotated edition of 'The Histories,' newly translated by Andrea L. Purvis, and illustrated with 127 maps.… Herodotus’ account of the rise of the Persian empire and its war with the city states of Greece rolls right along, a great narrative packed with incident and supported, for the general reader, by an ingenious apparatus of side notes, footnotes, telescoping maps within maps, and 20 essays on various aspects of Herodotus and his world assembled in an appendix. It’s tremendous." — William Grimes, The New York Times

"The unrepentant history lover will want to spend hours with Robert B. Strassler's second title in his readable Landmark series. THE LANDMARK HERODOTUS has all the glory, myth and magic of earlier versions, with one remarkable difference: modern readers will have no trouble reading it. In this edition, it's easy to see why Herodotus was the father of history as well as the father of geography and the father of ethnography. The new version makes the friction between east and west easily discernible to the modern reader and we can readily see how Greece's radical democracy emerged. Besides, it's a blast to read Herodotus' early takes on Croesus, Babylon, the Nile, reincarnation, Phillipides' run at Marathon, etc. An excellent index and a trove of subject essays in the appendices round out a superior book for the history buff. " — Santa Cruz Sentinel

"There is good reason for Herodotus being called the father of history. Before him we have no records of any seemingly dispassionate observer doing anything similar. But that alone would not explain why Herodotus is still so imposing a figure, or why the publication of THE LANDMARK HERODOTUS—which includes a new translation by Andrea L. Purvis, and extensive annotation by scholars—is such a worthy occasion for celebrating Herodotus’ contemporary importance. It may even be that this book makes Herodotus seem less monumental than he appears in other editions, as mystery is stripped away from the book’s exotic allusions and geography. Maps—127 of them—outline Herodotus’ world; even the text is clearly mapped out, with wide margins offering summaries of each paragraph and identifying the time period. The headings, index and footnotes let you know precisely where you are in this notoriously winding narrative, providing a set of landmarks far more detailed than anything Herodotus could have found during his tours. The appendices, nonjargony bits of scholarship by various authors, come at Herodotus from as many perspectives as he brings to his inquiries: Herodotus and Athenian government, Herodotus and tyranny, Herodotus and the poets. Photographs of artifacts and statues, most as little worn by the intervening millenniums as Herodotus’ conversational prose, help make history’s abstractions concrete. And the probing introduction by Rosalind Thomas increases readers’ knowledge and curiosity. The project also seems suited to its subject. This book, like THE LANDMARK THUCYDIDES (1996), which sold an astonishing 30,000 copies in hardcover and more than 40,000 in paper, was conceived and edited by Robert B. Strassler. Mr. Strassler made his fortune in the oil business, then joined the board of what is now Bard College at Simon’s Rock in Great Barrington, Mass., and returned to a passion for Greek history that he first explored as a Harvard undergraduate. He recruited scholars to work with him on these textual 'landmarks'; a volume on Xenophon is next. I defer to classicists for more elaborate judgments, but the impression is not one of grand theories but of transparency and clarity." — Edward Rothstein, The New York Times

"[Herodotus’] popularity among ordinary readers will likely get a boost from the publication of perhaps the most densely annotated, richly illustrated, and user-friendly edition of his Histories ever to appear: THE LANDMARK HERODOTUS, edited by Robert B. Strassler and bristling with appendices, by a phalanx of experts, on everything from the design of Athenian warships to ancient units of liquid measure…. THE LANDMARK HERODOTUS is an ideal package for this multifaceted work. Much thought has been given to easing the reader’s journey through the narrative: running heads along the top of each page provide the number of the book, the year and geographical location of the action described, and a brief description of that action. Particularly helpful are notes running down the side of each page, each one comprising a short gloss on the small ‘chapters’ into which Herodotus’ text is traditionally divided. Just skimming these is a good way of getting a quick tour of the vast work…. And THE LANDMARK HERODOTUS not only provides the most thorough array of maps of any edition but is also dense with illustrations … a lovely thing to have in a work so rich in vivid descriptions of strange lands, objects, and customs. " — Daniel Mendelsohn, The New Yorker

"Robert Strassler's new edition of Herodotus bears the same superb production and scholarly qualities of his earlier THE LANDMARK THUCYDIDES. But this is not the tinsel of coffee-table books. The stunning black-and-white photos highlight critical narrative moments, and the sharply drawn maps unfailingly remind us where we are — as do the side notes neatly placed in the page margins and the footnotes at the bottom. The footnotes, in turn, frequently refer the reader to the 21 appendices at the back of the book. These discuss in clear and accessible language an array of issues such as the size of Xerxes' army (Herodotus inflated dramatically the actual numbers) and women in the ancient world (Herodotus enjoys comparing sexual roles across different societies). Finally, Andrea Purvis' new translation is taut and lucid. Strassler's team of scholars and artists has done justice to the Greek historian…. The Landmark edition marshals its scholarly apparatus to great effect. A series of sharply delineated maps reveals the vast size of the Persian force, as well as the complex logistics required to move it across continents. No less powerful are the adjoining photos of weapons discovered in the plains of Marathon and the burial mound of Soros, where the bodies of the fallen 192 Athenians were interred…. The photos of sculptures and bas-reliefs of hoplites marching in phalanx formation bring us even closer to the splendors and miseries of Athenian freedom." — Robert Zaretsky, The Houston Chronicle