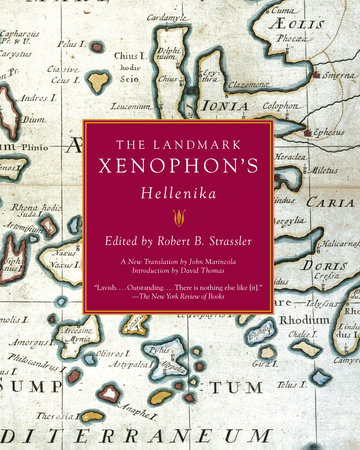 From the editor of the widely praised LANDMARK THUCYDIDES and LANDMARK HERODOTUS, here is a new edition of XENOPHON'S HELLENIKA, the major primary source for the events of the final seven years and aftermath of the Peloponnesian War.

Hellenika covers the years between 411 and 362 B.C.E., a particularly dramatic period during which the alliances among Athens, Sparta, Thebes, and Persia were in constant flux. And along with the vol­umes of Herodotus and Thucydides, it completes an ancient narrative of the military and political history of classical Greece.

Illustrated, annotated, and filled with maps, this edition gives us a new and authoritative translation by John Marincola, an introduction by David Thomas, and fourteen appendices written by some of the premiere classical scholars at work today. And unlike any other edition of the Hellenika, it also includes the relevant texts of Diodorus Siculus and the Oxyrhynchus historian, which constitute the only contemporaneous works that can be used to assess Xenophon’s reliability and quality as a historian.

Like the two Landmark editions that preceded it, THE LANDMARK XENOPHON'S HELLENIKA is the most readable and comprehensive edition available of an essential history.

"A new edition of this history is now published under the general editorship of Robert B. Strassler, who earlier brought out Landmark editions of Herodotus and Thucydides. Strassler is what is today known as an independent, which really means amateur, scholar, taking the word amateur in its root meaning of lover. After a successful career in business—oil drilling—he retired, and soon thereafter devoted himself to ancient history, the love of which he acquired as an undergraduate at Harvard and never lost. The result of this devotion has been Strassler’s Landmark editions. These books print the central texts in solid new translations, with marginal notes and useful footnotes, introduced by scholars, with still other scholars writing upon specialized topics pertinent to the central texts. Perhaps best of all in the Landmark editions are the maps, which are clear, plentiful, and immensely useful. One can read Herodotus and Thucydides over and over without having such basic knowledge as how large Attica and the Pelopponnese are, how far is the distance between Athens and Sparta, or Corinth from either. Robert Strassler is himself, one learns, without Greek, and he has devised books of immense aid for the Greekless Hellenophile, of whom your reviewer is one. A Landmark edition is especially useful for Xenophon’s Hellenika, for it is a work over which much controversy hangs.… Xenophon remains immensely readable and instructive. Without Xenophon’s Hellenika, as Robert Strassler notes, ‘we would know nothing or very little of many events and developments of that dynamic period’ from the end of the Peloponnesian War through 362 B.C." — Joseph Epstein, The Weekly Standard

"More than a decade ago, Robert Strassler conceived the idea of presenting the great classics of Greek historiography in new translations with ample annotation, excellent maps, and contributions from major scholars. He calls his volumes Landmark editions, and indeed they are. There is nothing like them. With the publication of the first Landmark volume, covering Thucydides, it was apparent that for the first time a Greekless reader could study the text closely and critically, much as a professional classicist would. After Thucydides, Strassler produced the equally successful Landmark Herodotus. Now he has given us his Landmark Xenophon’s Hellenika…. Strassler has assembled an outstanding team of contributors for his Xenophon volume." — G.W. Bowersock, The New York Review of Books