The Millionaire Was a Soviet Mole

The Twisted Life of David Karr 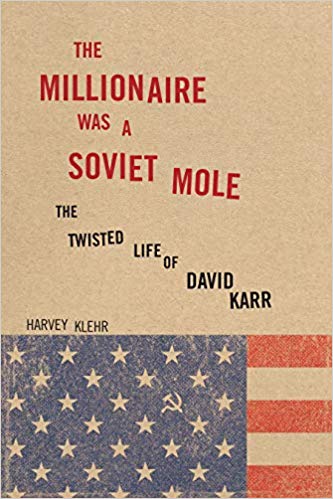 By the time he died under mysterious circumstances in Paris in 1979 at the age of sixty, David Karr had reinvented himself numerous times. His remarkable American journey encompassed many different worlds—from Communist newspapers to the Office of War Information, from muckraking columnist to public relations flack, from corporate raider to corporate executive, from moviemaker to hotel executive, from international businessman to Soviet asset. Once denounced on the floor of the Senate by Joseph McCarthy, he became a trusted adviser to Sargent Shriver, Scoop Jackson, and Jerry Brown.

As a New York businessman Karr orchestrated a series of corporate takeovers, using a variety of unscrupulous tactics. With virtually no business experience, he became CEO of Fairbanks Whitney, a major defense contractor, only to be quickly ousted by outraged stockholders. After settling in Paris, he arranged the building of the first Western hotel in Moscow, obtained North American rights to the marketing of the 1980 Moscow Olympics mascot, and won the contract to sell Olympic commemorative coins.

Karr died suddenly and mysteriously in 1979. The French press exploded with claims he had been murdered, naming the KGB, CIA, Mossad, and Mafia as suspects. A British journalist later accused him of plotting with Aristotle Onassis to assassinate Robert Kennedy on behalf of the PLO.

With three ex-wives, one widow, five children, an outdated will, and millions of dollars in assets, Karr’s estate took a decade to unravel. Based on extensive archival research and numerous interviews, The Millionaire Was a Soviet Mole aims to unravel the perplexing question of whose side he was on during his tumultuous career.

"Harvey Klehr’s new book, The Millionaire Was a Soviet Mole: The Twisted Life of David Karr is a rarity: a biography of a man so interesting that you wonder why you never heard of him before. Of course, a biography of someone unfamiliar to the vast majority of readers is a bit of a difficult sell for those uninitiated into the work of Klehr, the Andrew W. Mellon Professor Emeritus at Emory University. In a perfect world, Klehr’s groundbreaking contributions as a historian would automatically make any new book of his a matter of significant public interest. But as it happens, the 73-year-old’s life’s work amounts to reporting on the history of the communist movement in the United States, and a significant part of that amounts to his uncovering the startling extent to which various influential Americans and U.S. institutions were willing participants in Soviet espionage. It’s clear that our political Left, our academics, and our journalistic establishment (but I repeat myself) would gladly ignore Klehr’s scholarship altogether. In 2009, when he played an instrumental role in showing that the beloved left-wing journalist I.F. Stone had worked as a Soviet spy, the response from the mainstream press included a great deal of denial and even outrage directed, not at Stone for selling out his country, but at Klehr and fellow historian John Earl Haynes for their temerity in having unearthed this inconvenient fact. A decade after this revelation, the Nieman Foundation at Harvard is still handing out the ‘I.F. Stone Medal for Journalistic Independence’ even though ‘journalistic independence’ is an unworthy appellation to use for a man who, it turns out, was paid to propagandize on behalf of a foreign government responsible for as many as 100 million deaths in the 20th century. While the book contains no truly groundbreaking information on a par with much of Klehr’s heavyweight scholarship, it makes up for this by being an engaging book about a fascinating man. Indirectly, it is also a wonderful introduction to the general topic of American communism." — Mark Hemingway, Law and Liberty  (Read the full review)

"In the 1930s and ’40s, there were any number of American communists so enamored of Joseph Stalin and the shining tomorrows he promised that they would do anything for the Soviet Union, disdaining payment of any kind. David Karr was not one of them. Karr, writes Harvey Klehr in his riveting biography of the man, was something else entirely: He was the young American communist on the make, his eye 'ever alert for the main chance,' his hand ever open to Soviet largess…. Mr. Klehr, an emeritus professor at Emory University and a leading historian of American communism, has spent his professional life tracing, in his 13 books, the links between U.S. and Soviet espionage. He writes a controlled prose supported by meticulous documentation. The Millionaire Was a Soviet Mole, the product of 30 years of research, is a work of tenacity and obsession; it traces the contours of Karr’s life with great detail and precision. Though he’s a man obssessed, Mr. Klehr is always scrupulously fair toward his subject, unswayed by dubious accusations and conspiracy theories. He leaves no available document unturned and ferrets out all that we can know about David Karr. Given how slippery Karr could be, that’s an impressive achievement." — David Evanier, The Wall Street Journal