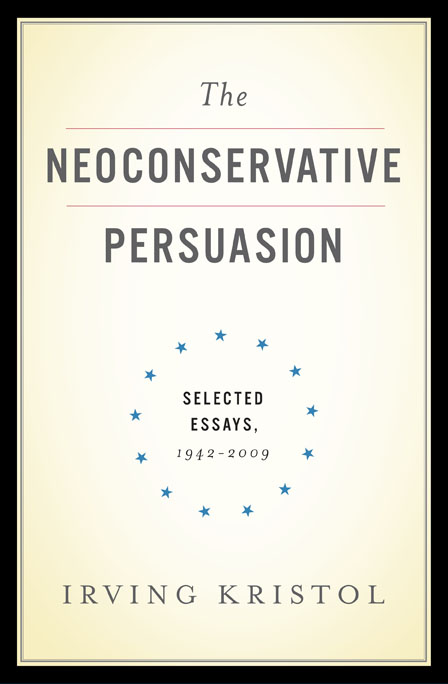 This collection of essays, many hard to find and reprinted for the first time since their initial appearance, is a penetrating survey of the intellectual development of one of the progenitors of neoconservatism. Irving Kristol wrote on a surprisingly broad range of topics from the neoconservative movement’s roots in the ‘40s at City College through the triumph of Reagan and the muddle of the Iraq war to Auden, religion, and the counterculture. Along the way, we experience the creative development of one of the most important public intellectuals of the modern age, a man who played an extraordinarily influential role in the development of American intellectual and political culture over the past half-century. His writing provides us with a unique and penetrating guide to the development of neoconservatism as one of the leading strains of thought in recent American political, social, and cultural history.

"An allergy to dogma, an openness to debate, a readiness to change one's mind are the hallmarks of these sparkling essays by Kristol (1920–2009), late founding father of neoconservatism. Gathered here are early pieces on literature and philosophy, valedictory memoirs, and commentaries on politics and culture, which collectively trace the author's rightward drift from Trotskyism through an increasingly conflicted liberalism to a resting place in the Republican Party. Some constants endure through this ideological journey: an abhorrence of making politics a religion; a focus on morality and character as the foundation of social policy; a perpetual unease with partisan groupings. (even in declaring himself a neo-con, he embraced "some form of national health insurance"). Kristol shines as a critic—of liberal flirtations with Stalinism, of the pieties of Great Society programs, of the excesses of student rebels.... Kristol's vigorous prose and trenchant arguments can be read with pleasure and profit by readers of all political stripes." — Publishers Weekly

"Kristol (1920–2009), referred to as the father of neoconservatism, was associated with, among other outlets, Commentary and the publishing house Basic Books. He became one of the most influential postwar public intellectuals. This collection of 48 of his essays on history, religion, economics, politics, and other topics is something of a family tribute, edited by his widow, historian Gertrude Himmelfarb, and with a foreword by his son William Kristol…. Readers new to Kristol will find this an excellent introduction to a forceful, provocative, and witty writer…. With a thorough bibliography." — Library Journal

"The essays in The Neoconservative Persuasion—all but one never before brought together in a book—are a remarkable introduction to one of the few people who actually liked being called a neoconservative. As Gertrude Himmelfarb, his widow, notes in the book's fine introduction, Irving Kristol was ‘neo’ from the very beginning, whether writing for a short-lived Trotskyist magazine, or serving as a co-editor of Encounter magazine or as an editor at The Reporter or Commentary, or creating (with Daniel Bell) The Public Interest, the influential quarterly journal about policy and politics. Kristol himself conceded, looking back, that he had been ‘neo’ from the start: a neo-Marxist, a neosocialist, a neoliberal and a neoconservative. What was ‘neo’ about Kristol was not an ideology (he found all of them incomplete) but his view that no ideology could match the complexity of human nature, take properly into account the significance of religion or cope with the unintended consequences of public policies…. Kristol’s neoconservative persuasion put him in opposition not only to conventional liberalism but to parts of American conservatism: He accepted many aspects of the New Deal (Social Security, unemployment insurance) and was upset when business leaders urged him to teach his students about the virtues of the profit motive—there are such virtues, he conceded, but he believed that we may accept them without celebrating them.… The Neoconservative Persuasion certainly merits celebration.... [A] wonderful book." — James Q. Wilson, The Wall Street Journal