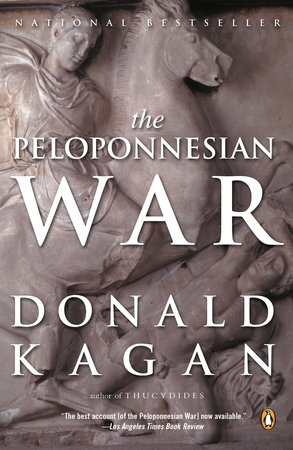 "Truly impressive, presenting a thorough, yet concise, erudite, yet accessible, narrative encompassing ancient Greece's 30-year Great War.... An objective, nuanced perspective on the military drama. And it's quite a drama: the clash of democracy and oligarchy, the testing of great leaders, the innovative military tactics, and the unprecedented human cost. The Peloponnesian War has been likened to World War I and the Cold War — both themselves dramatic, paradigm-shifting clashes of civilizations — but Kagan wisely lets his readers make these connections for themselves. It is to the author's great credit that the war's many characters and places are presented accessibly enough to feel relevant to modern events, two and a half millennia later.... Kagan's history is excellent." — Booklist (starred review)

"There is certainly no one better to write such a book than Mr. Kagan.... [He] is without a doubt the foremost living expert on Thuycidides." — The Washington Times

"Kagan's meticulous explanation of the epic Greek struggle for power offers lessons that apply today — lessons about foreign policy, and about where competition for global control can lead." — Ft. Worth Star-Telegram

"Kagan's masterful four-volume history of the Peloponnesian War, the titanic clash between the Athenians and the Spartans in the last decades of the fifth century BC, remains the definitive work on the subject. Kagan here provides a condensed version for popular readership, telling the story as well as it can be told." — Foreign Affairs

"Kagan, a chaired professor of classics and history at Yale, describes his intention to offer both intellectual pleasure and a source of the wisdom so many have sought by studying this war. On both aims he succeeds admirably.... Much of the value of this work lies in Kagan's brilliant contextualization of his ancient professor's work. The volume's ultimate worth, however, lies in the perceptive, magisterial judgment Kagan brings to his account of the war that ended the glory that was ancient Greece." — Publishers Weekly

"In a style at once readable and pithy, Kagan makes fifth-century B.C.E. Greece comprehensible to all readers.... Kagan's sumptuous style will enthrall readers who had not imagined that they would find the topic so absorbing." — Library Journal

"Classical scholar Donald Kagan, a noted authority on the subject, shares his vast knowledge and insight in THE PELOPONNESIAN WAR, a magnificent new book... Kagan's history gives us the broad sweep of the entire war along with astute analysis and commentary.... There is much to keep track of in this book — but the effort is well worth it. The reader comes away with a much clearer understanding of the rise and fall of a great empire while gaining wisdom that may help us better understand events in our own time." — BookPage

"Carefully researched, closely reasoned, and well-written... A fresh examination of one of the West's greatest tragedies.... Impressive proof that the field of history is still vigorous and intellectually exciting." — Mobile Register (AL)

"Authoritative history demonstrating that, though the weaponry may have multiplied, the reactions of leaders and societies during wartime have altered little." — Kirkus Reviews

"A fresh, clear, and fast-moving account.... Eminently readable.... Handsomely furnished with something essential to a history of war: maps, over a score of them, all clearly printed and complete and situated just where you need them. It is the final element in the construction of what [Kagan] aims at: 'a readable narrative in a single volume to be read by the general reader." — The New York Times Book Review

"'The Great Peloponnesian War...began not with a formal declaration of war and a proud and open assault upon the homeland of imperial Athens, but with a stealthy and deceitful raid in peacetime...'. That is the striking introduction to Donald Kagan's new version of THE PELOPONNESIAN WAR: Athens and Sparta in Savage Contact, 431-404 B.C., a version which represents a reworking of the exhaustive four-volume study that he produced between 1969 and 1987.... This is a much sparser, more direct version of the Peloponnesian War.... The result is a powerful, often compelling, and, in many ways, very Thucydidean account.... The reader of this book will undoubtedly learn much about the Peloponnesian War, and may even come to a better understanding of the problem of global conflict. But the message of the book, too, is that the wisdom gained from a clearer understanding of that problem does not necessarily bring with it any hope of its solution." — Times Literary Supplement

"For a different sort of general reader who enjoys a riveting story and seeks a coherent guide to the general chaos of the present in some abstract and timeless wisdom of the past — however uncomfortable it may be in our present therapeutic age. Reading Kagan's account of near endless fighting over three decades reminds us that aggressive states are just as likely to go to war for reasons of honor and pride as they are to fight over economic exploitation, lost homelands, or past social injustices.... Kagan presents a seamless chronological narrative of the war...punctuated by his own lifelong interest in the primacy of politics and these very human emotions like envy, fear, and self-interest that really drive statesmen even as they profess ideals of a higher sort. His contribution is not merely to piece together a coherent story from sources that are incomplete and often at odds, but in addition to explain rationally why Athens did so many supposedly stupid things.... [A] dividend of decades of patient classical scholarship, characteristic of a nineteenth-century tradition of academic rigor coupled with a desire to educate a new generation of English readers.... Kagan is an unapologetic military and political historian who seeks to remind us that hardball politics and self-interest are not modern democratic traits, but were at the root of the city-states' unfathomable foreign policies." — Victor Davis Hanson, National Review