The Persecution of Sarah Palin 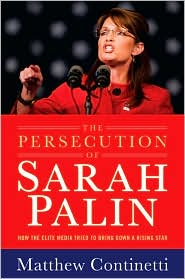 Sarah Palin spent more than a decade making her town and her state better.  She slashed government spending and corruption and encouraged economic growth. In 2008, she took to the national stage to bring her successful vision to the entire country. America quickly embraced her message, and Palin became the hottest rising star the country had seen in years.

Palin was a strong and popular conservative with traditional values-—work, family, and religion—and Washington Democrats and their allies in the so-called mainstream media decided she had to be destroyed. These elite liberals attacked everything from Palin's clothing to her parenting style to her church.

They spread one malicious and untrue rumor after another. The media also treated Palin with such insulting condescension that it frequently lapsed into mockery. Palin was routinely ridiculed and vilified-and so was her family.

Matthew Continetti reveals the true story of the 2008 Republican vice presidential nominee and her persecution by the elites who tried to hide their bias with solemn declarations of objectivity. Continetti offers fresh examples of malicious spin and deceit and shows how liberal snobbery has become a driving force in American politics.

"A compelling account of journalistic malpractice on a grand scale. Those called out in this book should not be allowed to forget what they did." — Brit Hume, senior political analyst, Fox News