The Revisionist and The Astropastorals 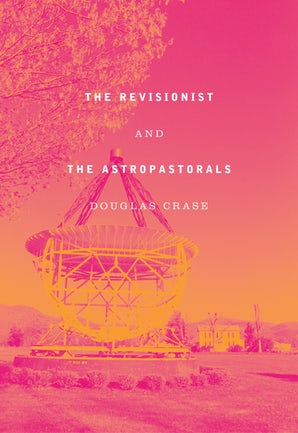 Douglas Crase is best known for his invocations and revisions of Whitmanian transcendentalism. His book The Revisionist was strong enough to establish him as one of the most important poets of his generation; on its strength, says The Oxford Book of American Poetry, “rests a formidable underground reputation.” Now, combining The Revisionist—out of print since 1987—with his chapbook The Astropastorals, this new collection makes Crase’s work available to a wide public for the first time in more than thirty years.

First published by Little, Brown & Co. in 1981, The Revisionist was nominated for an American Book Award and a National Book Critics Circle Award and named a “Notable Book of the Year” by The New York Times.

"One of the most important poets of his generation." — Roger Gilbert, Oxford Companion to 20th-century Poetry in English

"With an introduction by poet and critic Mark Ford, this important volume gathers and contextualizes Crase’s innovative body of work. 'Crase established himself as among the most resourceful, inventive, ambitious, and well-equipped of those attempting to renew and extend the Whitmanian covenant,' Ford explains, rightly calling attention to Crase’s recasting of transcendentalism and the capacious sensibility of these poems.... Crase renders the most familiar tropes wonderfully strange, these 'revisions' of a received canon proving as subtle as they are provocative.... This expertly framed volume marks a lasting contribution to American poetry." — Publishers Weekly (starred review)  (Read the full review)

"Crase looks at the city and the landscape with the amused, disabused eye of a lover. Revisionism, in his supple argumentative poetry, turns out to be something very close to love." — John Ashbery

"Crase’s excellent book, The Revisionist, is even more impressive considered as a first effort. Mr. Crase has what it usually takes several books to achieve: an important subject; a consistent and supple attitude toward it; and a style rich enough to answer to it. His subject is America, more specifically the spirit of place, for he writes of geology, colonial history, Federal architecture and a variety of landscapes. His attitude is probing, tenacious, and he conveys it without too much cynicism or weariness and with an occasional sprightliness. Stylistically, his work uses a free loose verse that comes close to musical prose. Like Merrill’s and Ashbery’s, his writing argues sinuously, often subordinating sentence elements and juggling contexts in an almost baroque way. His failures are what usually count as virtues, but virtues overdone: too much elegance; too much richness of reference, which leads to obscurity. But the large proportion of Mr. Crase’s poems succeed, in whole or in part. Imagine, paradoxically, Auden as the guiding spirit of style and Williams as the instructor of concerns, and you have a sense of Mr. Crase’s richness. He can be accurate and nimble with metaphor and description…. He can also be discursive, boldly minimizing imagery when required.... Douglas Crase writes of the nation, materially and mythically…he has written on a large scale, and with considerable authority." — Charles Molesworth, The New York Times Book Review

"That Crase's invocation of the Whitmanian poetic tradition can be so powerful after all these years of overuse and abuse is a small miracle of revisionism itself." — Phoebe Pettingell, The New Leader

"A crazy love poem for a threatened landscape." — Jay Parini, The New Republic

"The unusual case of a contemporary poet whose most public, expansive voice is his most authentic." — Helen McNeil, Times Literary Supplement

"Crase’s is a purely democratic voice that takes its song from all aspects of American life—colonial and contemporary, low and high, unjust and righteous—and focuses its tune on the future with its mind on the past. It couples Whitman’s expansiveness with Ashbery’s amused loneliness, then adds Stevens’s cerebral naughtiness and Schuyler’s precise description of things as they are. But beyond that sum and its parts, there is another voice that sets the poetry in a more liberating direction." — Michael Schiavo, Tin House

"This is such anticipatory, massively omniscient edging work. It’s a tone you’d expect a poet to hit here or there but Doug hits it always and I don’t know that he ‘knows,’ or his poem knows but there’s a temptation as a reader to want to stay in it always. He’s not saying it’ll be okay. But even, not meekly, that there are patterns." — Eileen Myles