How Five Great Commanders Saved Wars That Were Lost, From Ancient Greece to Iraq 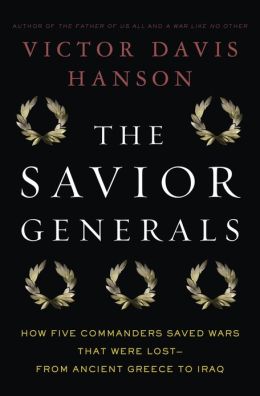 We usually associate great wartime leadership with a captain of the battlefield like Julius Caesar or Napoleon, or with a sober and judicious organizer such as Eisenhower. But war is rarely a clear-cut and predictable enterprise. Sudden, radical changes in fortune during the course of a war often precede a final verdict. When many deem a war irrevocably lost, “savior generals” sometimes find victory. These are commanders asked at the eleventh hour to save a seemingly hopeless situation. What allows such rare generals to save a war when things seem desperate or indeed already lost?  To answer that question, famous classicist and military historian Victor Davis Hanson examines the lives of Themistocles, the Athenian who triumphed over Sparta at Salamis; Belisarius, general of the Byzantine Empire; William Tecumseh Sherman, who devastated rebel forces in the U.S. Civil War; Matthew Ridgway, who rallied victory in the Korean War; and David Petraeus, mastermind of the “surge” in the recent Iraq war.

These “firemen,” asked to extinguish the conflagration that others of usually superior rank and prestige have ignited, act in a moment that signals a crisis of confidence, when the general public of a consensual society may already have favored retreat or even acceded to the idea of capitulation. In some sense, they win against impossible odds—when all others cannot or would not try—which is the only mark of a great general.

"Victor Davis Hanson's The Savior Generals focuses on five figures who faced an outsize challenge and rose to meet it with resolution and skill. 'In some sense, winning against impossible odds—when most others cannot or would not try—is the only mark of a great general,' Mr. Hanson writes. Mr. Hanson's fluency with a broad range of historical epochs, which has made him one of his generation's most notable historians, is on full display in The Savior Generals. Although his portraits come from the military realm—ranging from the classical period to the current day—they illustrate eternal verities that arise in all types of endeavor, and they capture attributes associated with master strategists in all walks of life, such as a disregard for conventional wisdom and an intuitive grasp of the big picture." — Mark Moyar, The Wall Street Journal

"It is not really news that Victor Davis Hanson has written another outstanding and eye-opening book. He has done that repeatedly on a variety of subjects. The subject of his latest book, The Savior Generals is given in the subtitle: How Five Great Commanders Saved Wars That Were Lost - From Ancient Greece to Iraq. As both a military historian and a classicist scholar, Victor Davis Hanson is one of the few people qualified to cover such a wide sweep of history. As someone whose depth of knowledge and insight are already familiar to readers of his syndicated column, he is also one of the few who can discuss complex subjects in plain English. The subject of The Savior Generals could not be more timely…. Those who turned out to have the decisive virtues at the decisive times include some who were failures at other times and in other settings, so The Savior Generals is not an exercise in hero-worship. It is instead a lesson, based on experience over the centuries, on the need for serious, realistic and in-depth understanding in a dangerous world, where there are all too many lures into self-indulgent, shortsighted or wishful thinking….The Savior Generals covers not only military history but also the social and political history that provides the context in which military events took place. It leaves us a lot to think about regarding the issues and predicaments of our own time." — Thomas Sowell, Washington Examiner

"Students of military leadership will be intrigued by Hanson's astute set of cases." — Booklist

"Hanson begins with a deceptively simple question: 'How are wars won or lost?' He cites familiar answers—technology, numbers, contingency—but he asserts that in desperate situations, human leadership still matters. To make his case, Hanson profiles five 'savior generals' drawn from 2,500 years of conflict…. Hanson accurately describes these men as a 'rare breed' of 'mavericks and loners.' From Athens to Iraq, they seized their moments and reshaped history." — Publishers Weekly

"An instructive series of portraits of five military outsiders called in to turn defeat into victory." — Kirkus Reviews