The Serpent and the Lamb

Cranach, Luther and the Making of the Reformation 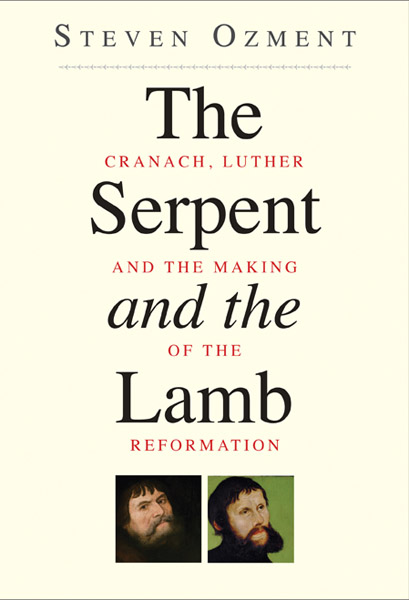 This compelling book retells and revises the story of the German Renaissance and Reformation through the lives of two controversial men of the sixteenth century: the Saxon court painter Lucas Cranach (the Serpent) and the Wittenberg monk-turned-reformer Martin Luther (the Lamb). Contemporaries and friends—each was godfather to the other’s children—Cranach and Luther were very different Germans, yet their collaborative successes merged art and religion into a revolutionary force that became the Protestant Reformation. Steven Ozment reprises the lives and works of Cranach (1472–1553) and Luther (1483–1546) in this generously illustrated book. He contends that Cranach's new art and Luther's oratory released a barrage of criticism upon the Vatican, the force of which secured a new freedom of faith and pluralism of religion in the Western world. Between Luther's pulpit praise of the sex drive within the divine estate of marriage and Cranach's parade of strong, lithe women, a new romantic, familial consciousness was born. The "Cranach woman" and the "Lutheran household"—both products of the merged Renaissance and Reformation worlds—evoked  a new organization of society and foretold a new direction for Germany.

"Ozment's book offers a tour through Cranach’s oeuvre, and the somewhat erratic art criticism it has inspired…. What most interests Ozment is the influence of the Reformation on Cranach’s art, and, in turn, the role of that art in promoting Protestantism. It is a fascinating subject…. Given the strong hold of Catholicism on early modern Germany’s visual culture, popular Protestant iconography was a crucial weapon for the early Reformers, as Ozment skilfully demonstrates…. Few art critics can approach Ozment’s intricate knowledge of Lutheran theology…. The Serpent and the Lamb is generously stocked with both Lucas Cranach’s beguiling images and Steven Ozment’s deep historical erudition. The book brings to life the kind of enriching political, social, and theological detail which are often treated too perfunctorily by art critics." — Jeffrey Collins, Times Literary Supplement

"It is common knowledge that Martin Luther (1483-1546) changed the religious landscape of Western Europe. Fewer of us are familiar with Lucas Cranach the Elder (1472-1553), the most prolific and arguably the most accomplished artist of the time. And only specialists know that the two were close friends who struggled together on a united front for many of the same goals. Steven Ozment, a distinguished Harvard historian, scrutinizes this relationship between theologian and artist and argues that working in tandem, they shook ‘the foundations of established religion and established art.’… Ozment’s book is no stodgy, dreary tome on art history or the history of theology. Rather it is an example of scholarship at its best: carefully researched, elegantly written, spirited and provocative. Another of its outstanding features is the selection of 77 black and white plates and 11 color plates, accompanied by Ozment’s invariably insightful and thought-provoking commentary Cranach’s ‘Wittenberg Altarpiece’ paired with Ozment’s explication, for example, is a gem and an eye-opener. Of course, even in the midst of such excellence, reviewers can find faults. But measured against this book’s towering virtues, quibbling seems somewhat lame. Relatively few of the books I see are worth a ‘slow read.’ This is one of them." — Denis R. Janz, America

"Ozment has provided a careful and thorough guide to his life and times—a virtuoso performance." — The Weekly Standard

"The Serpent and the Lamb is one of the most respected historians of early modern Germany doing what he does best. As he has demonstrated in such prior works as ,The Burgermeister’s Daughter and Flesh and Spirit, Ozment is brilliant at closely examining the primary texts of the period, liberating them from preconceptions and received opinion, and delivering to his readers insightful, surprising and frequently entertaining accounts of life in central Europe at the close of the medieval world…. Ozment is one of those historians of the period whose nonfiction is more interesting than the work of most historical novelists…. In short, this is no less than a great book, a shatterer of preconceptions, a demonstration of the complexity and nuance of the questions that animated times past, a fluent and lively account of a corner of the world that would eventually shape modernity…. If you have lay friends who love renaissance history, you should give them this book. And if you have friends who hate renaissance history because of a bad experience with a dull teacher or duller tome, then you should definitely give them this book, for if anything has the power to change their opinion, it surely does." — Jeremy Dowless, Goodreads

"In those tumultuous and critical opening decades of the 17th century, Reformation artist Lucas Cranach produced a wide variety of stunning art that assisted in making 'Luther the Monk' a household name throughout the Holy Roman Empire. In this intriguing account of the innovative artist’s life, an eminent historian of the era, Steven Ozment, engages Cranach’s contemporary critics and his modern ones, whose continued comparisons to the era’s phenomenal talent, Albrecht Dürer, misses the true originality and creative genius of an artist who produced the 'Wittenberg style.' Ozment believes that this 'style' presents viewers 'with a kind of twilight zone where previously commanding orthodoxies no longer held great sway.' For Ozment, Cranach and Dürer occupy diametrically opposed positions in the history of German Renaissance and Reformation art, with Cranach’s themes of 'fantasy and charm' contrasting with Dürer’s more direct milieu of 'seriousness and power.' While the title of the book suggests more of a dual biography than is found within its pages, Ozment has produced a delightful and in-depth look into the art and legacy of an artist he describes as the 'creator of an unredeemed, seductive world of beautiful women and powerful men.' The Serpent and the Lamb is packed with stunning images and brilliant analysis, a sheer delight for serious readers of Reformation era history and art." — Brian Odom, The Washington Independent Review of Books

"Ozment is determined to strip away the varnishes of 'a dark historiography' from Cranach and the early Reformation in order to reveal the artist standing in full light next to Martin Luther, not in any way obscured by his shadow. In this fascinating biography, it is not so much the influence of the Reformation on the arts that matters, but rather Cranach’s profound contributions to Reformation politics and culture. Ozment makes a bold claim for the transformative force of Cranach’s art." — David H. Price, author of Albrecht Dürer’s Renaissance

"Ozment examines the friendship of the painter Lucas Cranach the Elder and Martin Luther as it pertains to the Protestant Reformation. What he has produced is a look at Cranach's life and art that, necessarily, includes Cranach's working and personal relationship with Luther. The two came to know each other when Cranach was commissioned to paint a portrait of Luther in 1520. That same year, Cranach's co-owned printing house began publishing tracts and biblical translations by Luther, and these joint ventures merit a chapter. Cranach's famous nudes are discussed as reflections of Luther's acknowledgment of God's gift of sexuality to humankind, but the focus is always on Cranach. Ozment does a commendable job of chronicling Cranach's life and examining his art, with black-and-white reproductions adjacent to his coverage and color plates in the center of the work. Based on published sources, but with Ozment's own new interpretations, this should prove of interest to those studying Reformation art and belief. Despite lacking a sharp focus on Luther, the book also presents a side of the primary Protestant that is worthy of study." — Library Journal