The Seven Sins of Wall Street

Big Banks, Their Washington Lackeys, and the Next Financial Crisis 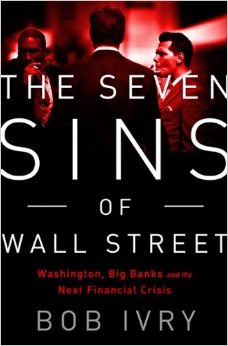 How's this for fair? Since June 2009, the end of the recession, middle-class income declined while the biggest banks made more money than they ever did. Still, bankers have agitated for loosening rules that might prevent another implosion on the grounds that regulation would crimp their profits. The irony is, without the help of regulators, taxpayers and lawmakers, they'd live more like the rest of the country—struggling to stretch their paychecks to the end of every month and saddled with credit scores that make it unlikely they'll ever be able to borrow anything but hedge clippers from the neighbors.

Without Washington as its midwife, their new Gilded Age would never have been born, with its strong whiff of the robber barons of the 1890s. Bankers' rights expanded immeasurably after the crisis. Today, some of them don't pay taxes at the same rate the rest of Americans do; they can use deposit cash to roll the dice in the derivatives casino; they can mix trading oil with the business of drilling for it, shipping it, refining it and selling it; they can continue to defraud the same U.S. government that bailed them out; they face scant consequences for the fibs they tell investors or federal investigators.

The heart of the predicament was the growth of the biggest banks. Before the crisis, at the end of 2006, JPMorgan Chase, Bank of America, Citigroup and Wells Fargo had $5.2 trillion of assets on their books. In 2012, they had $7.8 trillion. That's a 50 percent increase. In 2012, Wells Fargo by itself wrote one of every three residential mortgages in America. Usually, growth is a good thing. But this was unnatural and out of control. The big boys had gotten so behemoth that if they coughed in New York, financiers felt the breeze in Singapore.

Bob Ivry has written this book to make sure the failure of America will be not be written off by Wall Street as its cost of doing business.

"Even five years after the financial crisis of 2008-9 crested, there is zero consensus about its causes. Just about anyone who can be blamed has been: rapacious bankers, venal elected officials, corrupt or incompetent regulators, naïve home buyers. Ivry, an editor and reporter at Bloomberg News, is clear where he stands: The culprit was 'the unprecedented growth of the biggest banks' and the subsequent bailout that saved those banks but left the rest of us in little better shape. This is an angry book, full of high dudgeon about the various sins of Wall Street that give Ivry his title. He documents the absurdity of ‘too big to fail’ with a reporter’s eye for the small story that illuminates the larger picture: Hazelwood Road in southwest Memphis, one of the many boom-and-bust epicenters of the housing bubble; the midlevel executives at Citibank and elsewhere who knew there was something amiss but failed to gain the attention of supervisors; the capture of post-crisis regulations like the Dodd-Frank bill by assorted industry lobbyists…. Ivry sees the crisis as a simple story of wrongdoing and the failure to punish it" — Zachary Karabell, The New York Times Book Review

"In a vague sort of way, most people are aware that Wall Street crashed the economy and rode out of town scot-free, collecting unimaginably huge bonuses along the way. But vagueness breeds passivity. Fortunately, we now have Bob Ivry's Seven Sins of Wall Street as an indispensable guide for tracking down live villains and unburied bodies. By the time you reach the end, all the sheer fury anyone with the merest flutter of a moral pulse felt back in 2008 and 2009 at the sight of bankers and their apologists blaming the cratering of the global economy on 'people buying houses they couldn't afford' wells up again, white hot. There are by now shelves full of histories of the bubble era, some of which even manage to be kind and understanding about the Gucci-clad perps who blew it up. (I'm thinking of Andrew Ross-Sorkin's, Too Big to Fail, in particular.) Ivry's contribution is to explain in limpid prose just what they have been up to since the third week of September 2008, when, as he reports, 'more than one high-placed man in American finance made a phone call to his wife, telling her to go to the ATM and withdraw as much cash as she could, because it looked like the ATMs might run dry.'" — Andrew Cockburn, Harper’s Magazine

"The next crash will fall like the recent landslide in Washington state, where a 1999 U.S. Army Corps of Engineers study warned of the risks of a 'large catastrophic failure.' And then it happened. In the next crash, when you hear someone claiming that it wasn't foreseeable, remember a new book by award-winning financial reporter Bob Ivry: The Seven Sins of Wall Street: Big Banks, Their Washington Lackeys, and the Next Financial Crisis. In it, he details the many financial crimes that have occurred not before but after the 2008 financial crisis. He writes about too-big-to-fail banks only becoming larger. He writes about private-equity firms buying up foreclosed homes, turning them into rentals and then issuing bonds on the revenue streams—schemes that sound like 2004 all over again. He writes about wrongful foreclosures and the economic squeeze on ordinary Americans. Mr. Ivry claims this is all quite deliberate: 'We called it a financial crisis, but what happened in 2008 was really a leveraged buyout of the United States.' He claims things have only gotten worse. The nation is now more in debt, and its people are now more impoverished, making America more vulnerable to the next big crash." — Al Lewis, The Wall Street Journal

"A reporter for Bloomberg News, no enemy of capitalism, reads a fiduciary riot act to the bankers and hedge fund managers of the world. A bank that’s too big to fail, by Ivry’s account, is far too big. Yet they were responsible for the near collapse of the world financial market in 2007–2008, through a combination of ‘stupidity, poor oversight, and more than anything, a neighbor-versus-neighbor waging of financial warfare.’ In the aftermath, banks have been posting record profits. It may be that theology and economics don’t mix, but the overall sin of a system so rigged is its simple unfairness. More specifically, Ivry calques the seven sins of theology onto Wall Street, finding it guilty of such things as secrecy, pride, regulatory capture—that is, when regulators identify more with the institutions they’re supposed to regulate than with the society that employs them—and ‘a predatory greed weaponized for the war fought by the rich against the poor and middle class.’ Ivry’s larger message is to show how these sins fuel a scheme in which risk is socialized, spread out among the taxpayers, while profit is most definitely privatized, kept out of the hands of the people who made it possible. Ivry writes with high indignation punctuated by occasional light touches (‘As I tried to find the switch on my own bullshit meter, which I had on vibrate and which was now rattling my molars…’), and he has a talent for deconstructing financial jargon (‘Think of derivatives as side bets made between two gamblers’). Yet his intent is utterly serious, and his book ought to become a standard text for the Occupy Wall Street and similar movements." — Kirkus Reviews

"Bob Ivry was one of the few journalists to grasp the depth of the 2008 financial crisis and his reporting on the bailouts was groundbreaking. Now he sets his sights on the aftermath of the bailouts and their true cost to American society. In accessible writing, sometimes funny, often infuriating, Ivry exposes the price America paid for rescuing the biggest banks, a price that we're paying up to the present day—bankers who behave like spoiled children, a government and central bank that spoil them and a democracy that's impoverished as a result." — Neil Barofsky, author of Bailout and the U.S. Treasury's Special Inspector General for the TARP

"Seven Sins is a highly readable, unremittingly scathing look at post-apocalypse, unrepentant Wall Street. It is at once a compelling guided tour of this bizzaro world and a sounding of the alarm about its portents." — John Helyar, co-author, Barbarians at the Gate

"Size, secrecy, pride, greed, impunity, complexity, and immunity from adequate regulation: these are journalist Ivry's cardinal sins of Wall Street. Ivry believes that U.S. banks have been allowed to swell into financial behemoths considered 'too big to fail,' entitling them to cheap money and massive government bailouts. Big banks have prospered in the wake of the Great Recession. JP Morgan Chase, Bank of America, Citigroup, and Wells Fargo had $5.2 trillion in assets on their books at the end of 2006; in 2012 they had $7.8 trillion. Meanwhile, ordinary Americans (unemployed, underpaid, and foreclosed upon) continue to suffer. Over several chapters, Ivry effectively contrasts the fate of a single mother foreclosed out of her Memphis home with that of a Wall Street trader who maintains multiple mansions that go unoccupied…. Well-informed proponents of the Occupy Wall Street movement will likely enjoy this emotionally-charged expose." — Publishers Weekly