The Starched Blue Sky of Spain and Other Memoirs 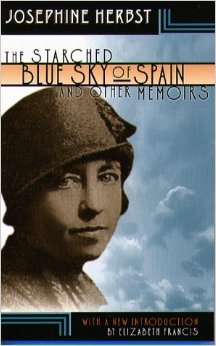 By the end of the 1930s, radical journalist and novelist Josephine Herbst (1892-1969) was widely hailed as one of the most important women writers in America. Yet she died in almost total obscurity. The Starched Blue Sky of Spain and Other Memoirs comprises four autobiographical works: "The Magicians and Their Apprentices," an intimate remembrance of Herbst's girlhood in turn-of-the-century Sioux City, Iowa; "A Year of Disgrace," a contemplative portrait of American literary culture in the 1920s; "Yesterday's Road," an explorative meditation on Herbst's life as a radical; and the title selection, a poignant and lucid evocation of the author's experience during the Spanish Civil War.

"Her best book.... Blazingly alive with all the passion, nostalgia for the old Midwest and the contrariness in general that made Herbst a favorite among the many writers who were her friends.... Her lyric radiance is all here. Every word of it is in contrast to the commercial swamp and academic frivolity of American writing today. It is a startling personal document." — Alfred Kazin, The New York Times Book Review

"Herbst is a journalist in a great American tradition.... She gets under the skin to the permanent news. This is a classic memoir—part of our heritage." — Hortense Calisher

"Herbst’s prose in these essays is so luminous and biting and poignant that it chills to the bone and sticks with one always." — Paula Rabinowitz

"These memoirs have much of what must have been her personality—intense, sincere, intelligent, demanding…. She was a friend of the famous writers of her day—of Hemingway, Dos Passos, Maxwell Anderson, Katherine Ann Porter. Maxwell Perkins was her editor…. We are given a vivid sense of how her commitment to literature shaped her life…. Hers was a remarkable perspective, honed in remarkable times…. We still live in a time that needs someone like Josephine Herbst to remind us of the uses of art and the meaning of a literary life." — Diane Johnson

"A radical document, not just well-wrought reminiscence." — The Nation

"Herbst, whose novels (the Trexler trilogy) and nonfiction were praised in the 1930s, was virtually ignored as a writer in her later years and after her death at age 77 in 1969.... But during that period she prevailed over poverty and loneliness to write the four incomparable essays reprinted here. The title piece evokes the internecine Spanish war and Herbst's experiences among fellow correspondents Hemingway and Dos Passos and with the country's suffering people. Insight and unstudied elegance are displayed in memoirs of the Midwest and of Germany as the Nazi threat loomed during the 1920s. Her recollections of a 1930 writers' conference in Russia leaves an indelible impression of the era that saw a worldwide revolution in politics and art. Courageous as she was, Herbst never revealed her lesbian affairs although the first one ended her marriage to John Herrmann, whom she truly loved and always regretted losing." — Publishers Weekly

"In four engaging essays written in her sixties about her life between ages six and 51, Herbst easily re-creates the artistic climate of the Twenties and Thirties, as well as the passion for art, conversation, and travel that drew many talented Midwesterners to New York and Europe. Her simple yet sensual prose evokes past moments and milieus, but she is equally effective when articulating the sociopolitical concerns that motivated many writers then--concerns that sent her to the USSR in 1930 and to Spain in 1936. Though her essay on the Soviet Union is perhaps more pertinent today than her Spanish Civil War reminiscences, overall she offers a compelling portrait of a woman writer living boldly. Herbst was persecuted in the Fifties for her political sentiments, and until recently she has been neglected. Her new work provides ballast from the woman's perspective when considered with books like Hemingway's A Moveable Feast, and...illuminates a past era." — Library Journal

"These posthumous memoirs of novelist and journalist Herbst alternate between dreamy recollection and thoughtful questioning of literary and political fashions…. In New York, Paris, and other centers of the cutting edge she is part of a literary circle that includes Katherine Anne Porter, Ernest Hemingway, Nathanael West, and others, living an enviable life of conversation and reading…. Herbst convinces us that she was in the eye of the storm of the era that ‘opened the world to its literary young on a scale never before ventured and not equaled since.’" — Kirkus Reviews