The Tides of Mind

Uncovering the Spectrum of Consciousness 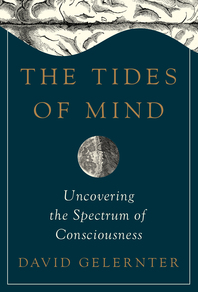 While the holy grail of psychologists and scientists for nearly a century has been to artificially replicate the thought patterns of the human mind, David Gelernter, a legendary computer scientist and AI authority challenges the notion that this can ever be achieved through state-of-the-art research or supercomputers. Surprisingly, he turns to literature, demonstrating that the works of geniuses like Shakespeare and Poe, Karen Blixen and Marilynn Robinson can answer many of our most fundamental questions about the origins of creativity. With far-reaching implications, Gelernter’s landmark “Cognitive Spectrum” helps decode some of the most mysterious wonders of the human mind, such as the numinous light of early childhood, why sadism and masochism underpin some of our greatest artistic achievements, and the patterns of dreams and memory. Based in the great introspective tradition of Wilhelm Wundt and even Descartes, The Tides of Mind provides a new view of the meaning of human consciousness, and promises to revolutionize our understanding of what it means to be human.

“Gelernter has designed a creative metaphysics for the digital age.”—Mara Delius, Die Welt

"A fascinating new book by Yale computer scientist David Gelernter also sees literature as a vast and largely untapped source of evidence for understanding the intricacies of human cognition. In The Tides of Mind, Gelernter marshals evidence from psychological and scientific research as well as the works of Marcel Proust, Franz Kafka, Austen, Charlotte Bronte, Ernest Hemingway, J.M. Coetzee and many others to advance a new paradigm for the study of human consciousness. It’s an astonishingly ambitious book, beautifully written and ultimately persuasive… Gelernter’s tides of mind are inextricably bound to the physical states of our bodies—whether we’re in sunlight or shade, alert or drowsy, day-dreaming or focused—and this means that computers cannot access the lower reaches of the spectrum, where memory and dreams wash over us. What eventually distinguishes humans from machines may not be the capacity for logical reasoning so much as the cascading series of analogies and associations that overtake us as we drift into sleep and dreams. In the words of John Donne: ‘I say again, that the body makes the mind.’" — Nick Romeo, The Chicago Tribune

"The problem of consciousness sits at the heart of neuroscience, and it is into this question that Yale computer-science professor David Gelernter steps with his fascinating The Tides of Mind.… Mr. Gelernter is an expert on artificial intelligence, and this book is an interesting and unexpected departure for him.... He shows a lovely deference not to neuroimaging or computers but to the pen...the technique allows him to paint a rich portrait of different modes of thinking, something like Proust’s masterly descriptions of the workings of memory." — David Eagleman, The Wall Street Journal

"Gelernter is a cross-disciplinary intellectual who has written highly interesting works of history, memoir, and, now, psychology. He rather boldly asserts a theory of mind that he touts as a radical departure from fashionable conventions, rejecting with gusto the oft-sighted computer analogy of the mind as software running on the hardware of the brain. Instead, Gelernter suggests the mind as 'spectrum,' basing his theory on his reflections on the experience of consciousness, which ranges from high-focus, task-oriented thought to low-focus mind wandering to no-focus dreaming. Consciousness phases from acting on external reality to being immersed in one's internal thoughts, which function through memories and emotions. To persuade readers that his framework is viable, Gelernter takes them through a daily passage up and down the spectrum, inducing them to consider if his observations—which he buttresses with quotations from the Western literary canon—parallel their own experiences. Since Gelernter's ideas can be self-tested by anyone, this spark for mental exploration may attract a sizable audience." — Gilbert Taylor, Booklist

"Sometimes it takes an expert to recognize when expertise is not enough. In his preface to The Tides of Mind: Uncovering the Spectrum of Consciousness, David Gelernter, a professor of computer science at Yale, explains how for years he tried to answer crucial questions about the nature of consciousness through computer modeling. But while computation can ape reasonably well our rational thought, he argues, what makes us human is our capacity to move up and down a spectrum of consciousness, from the crisp attention we feel when wide awake to the aimless associative states of drowsiness and daydreaming. Therefore, in The Tides of Mind, Gelernter employs not algorithms but introspection, personal reflection, and an engagement with a broad range of literary sources.… Gelernter’s explorations of self make for rewarding reading." — Kathryn Tabb, The American Scholar

"Everyone agrees that computers do not employ reason; they compute. This harmony dissolves when the discussion turns to the future, where vastly more powerful machines will develop sentience and feelings—or not. In this dense but imaginative meditation on how humans think, Gelernter marshals philosophers, poets, and authors, but few scientists, in support of his mildly quirky view of human consciousness. According to the author, the mind is a ‘room with a view' that combines inner thoughts with events in the outside world. He downplays the popular view that thought relates to the brain as software relates to hardware, maintaining that the mind is never in a steady state. All thought processes—e.g., memory, emotion, reason, and self-reflection—vary along a spectrum that depends on one's physical state and the time of day. At the top, where the computer analogy works, focus is intense, reason rules, and memory is subordinate: a source of data. Focus, but not memory, dims as the mind moves down-spectrum to fatigue, drowsiness, and finally sleep. Along the way, memory takes over, but it's pliable human memory, not hard-wired silicon. Perception becomes unreliable; we dream. ‘Up-spectrum, the mind pursues meaning by using logic,' writes the author. ‘Moving down-spectrum, it tends to pursue meaning by inventing stories—as we do when we dream. A logical argument and a story are two ways of putting fragments in proper relationship and guessing where the whole sequence leads and how it gets there.' Eschewing research in favor of literature and Freud, Gelernter delivers a personal, reasonable, nonscientific analysis of the mind." — Kirkus Reviews

"Those in a state of panic induced by books and articles about the possibility of a 'singularity' in which artificial intelligence triumphs over the human race will find comfort in this quite reasonable and decidedly human study of the mind. Gelernter, a professor of computer science at Yale, argues that the current trend in philosophy toward 'computationalism' ignores basic, glaringly obvious truths about the difference between brain and mind. For example, he asserts that human intellect and selfhood are not merely the product of the conscious mind. He explores the “spectrum” of thought experienced over the course of a day: the creative haze encountered upon first waking, the focused and rational thoughts of our most productive hours, the daydreaming we engage in while drowsy, the involuntary free association of near-sleep, and finally the opaque and mysterious realm of dreams and the unconscious. The author contends that the 'down-spectrum' realms of dreams and fantasies, which are controlled by emotion and memory, allow for the creative thinking that will always separate humans from machines. Quotes about the mind from Proust, Pynchon, Shakespeare, and other literary giants provide welcome reassurance that we’ve still got something on the robots." — Publishers Weekly