The War Against Boys 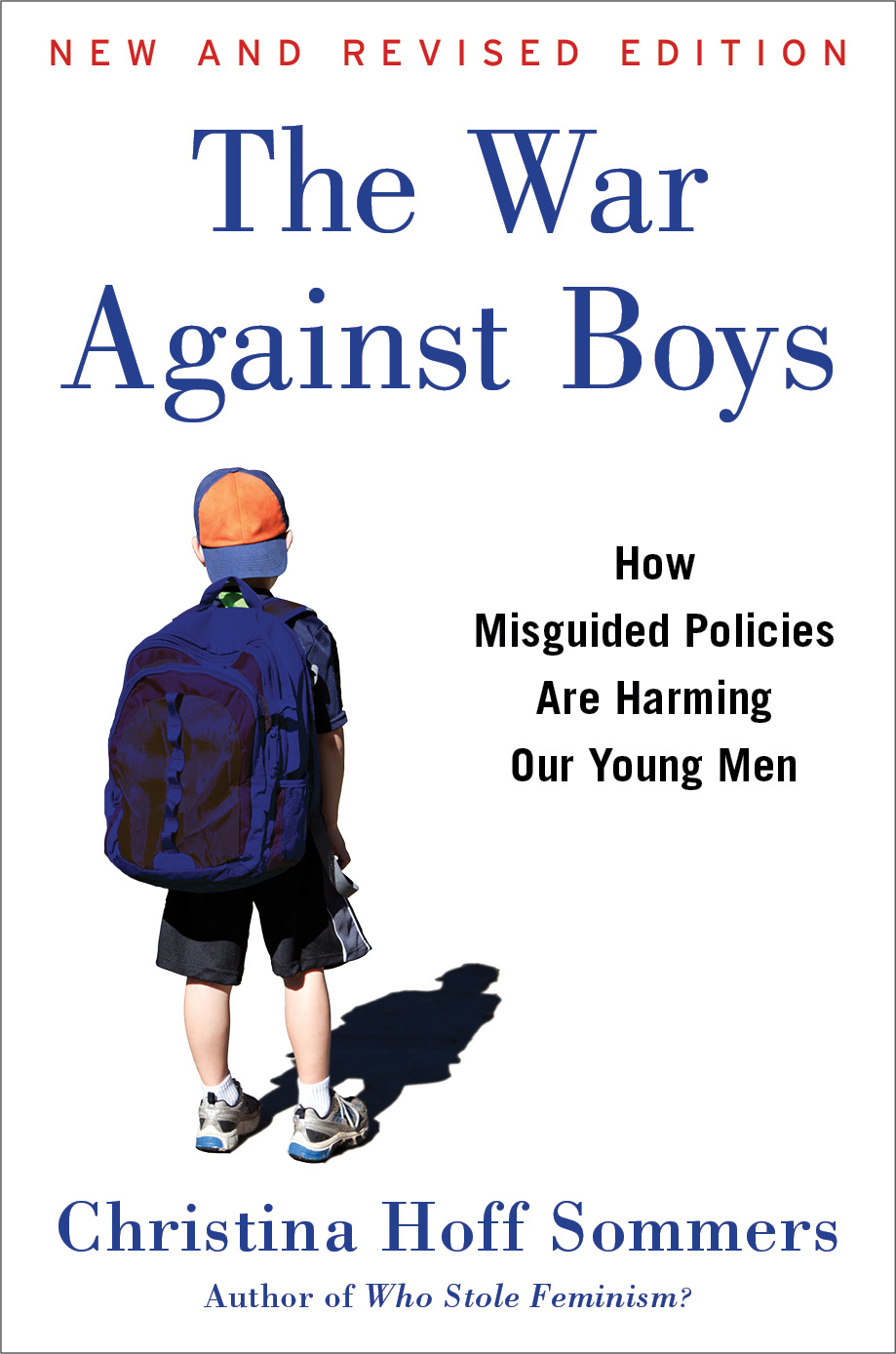 In this updated and revised edition of the controversial classic—now more relevant than ever—Sommers argues that boys are the ones languishing socially and academically, resulting in staggering social and economic costs. During the 1970s, feminists pointed out that girls and women were being shortchanged in society. The response was a number of social reforms that gave girls and women the attention and assistance that was long overdue. Consequently, girls have succeeded in school and women in society so that they now outperform boys and men.  Sommers contends that today’s women’s lobby still fears that aiding boys will happen only at the expense of girls, and that they are hindering efforts to address boys’ issues of devastating self-esteem and academic problems.  Called “convincing, even devastating” (Kirkus), “thoughtful and provocative” (The New York Times), and “impassioned and articulate” (The Christian Science Monitor) upon publication, this revised edition offers a new preface and six new chapters, plus updates throughout the rest of the book.

"This book promises to launch and influence an enduring national debate.... The author trains her empirical and polemical skills on an issue of demonstrable and often poignant urgency." — The Washington Times

"The burden of her thoughtful, provocative book is that it is American boys who are in trouble, not girls. Ms. Sommers, whose last book Who Stole Feminism? caused a stir with its claim that the women's rights movement was veering toward self-pity and authoritarianism, makes these arguments persuasively and unflinchingly, and with plenty of data to support them...[S]he has laid down an unignorable challenge to the views that have been widely expressed in American public discourse in recent years, views that have been given credibility by much of the media...Ms. Sommers comments acidly here and there, but her tone is generally measured, and she bolsters her points with an array of studies, statistics, and charts.... 'Talking about moral failure is less stylish than talking about the inimical workings of patriarchy,' she writes. 'But it is far more to the point.' Observations like that life Ms. Sommers's book from polemic to entreaty. There is a crying in the wilderness quality to her book, a sense that certain simple truths have been lost sight of in the smoky quarrelsomeness of American life. One may agree with Ms. Sommers or one may disagree, but it is hard not to credit her with a moral urgency that comes from both the head and from the heart." — Richard Bernstein, The New York Times

"Superb...Sommers makes mincemeat of educators and academics who insist that girls are suffering in school because of sexism and discrimination." — Danielle Crittenden, Slate

"Sommers's book has sparked a furious debate....While the debate plays out in intellectual and political circles, parents are left to wonder: how are girls and boys actually doing? A new report released by the Department of Education shows that boys are indeed faring worse in reading and writing — and they have been since at least the 1980s." — Newsweek

"Sommers's argument is a welcome ally to any parent of an active boy who cringes when a well-meaning teacher hints 'medication' might calm him down, or who tries in vain to stop her son from fashioning a gun from a finger or stick." — Peggy O'Crowley, The Star-Ledger

"Sommers pulls no punches....[Her] conclusions are compelling and deserve an unbiased hearing, particularly since they are at odds with conventional wisdom that paints girls as victimized and boys as emotionally repressed....Sure to kick up dust in the highly charged gender debates, Sommers's book is at its best when coolly debunking theories she contends are based on distorted research and skewed data...The most informed study yet in this area, this engrossing book sheds light on a controversial subject. It deserves close reading by parents, educators, and anyone interested in raising healthy, successful children of both sexes." — Publishers Weekly

"Sommers makes a powerful case for treating boys with more concern and compassion, while calling for a moratorium on the depiction of girls (and boys) as psychologically crippled victims of an oppressive society.... Sommers ably and convincingly rebuts the claims of a 'girl crisis.'" — Cathy Young, Salon.com

"Like the clear-eyed child of the fairy tale, Sommers...makes a compelling case that schools today are primarily failing boys." — The Raleigh News and Observer

"Hoff Sommers's work should be required reading for those who think political correctness is no more than a faintly tedious joke.... [She] is at her most impressive when she runs to earth not just the false evidence behind such claims, but the researchers who produced it and the reporters who credulously reproduced it. She records to great effect their denials and evasions." — Times Literary Supplement

"In Christina Hoff Sommers's splendid new book...she shows the damage that is being done to our sons by adults determined to stop them from being, well, boys." — Danielle Crittenden, New York Post

"Girls are well-adjusted, happy, and thriving. Can we say the same about boys? Not according to Christina Hoff Sommers, author of a new book in which she answers the question in profound and certain terms." — Caribbean Watch

"Christina Hoff Sommers, in her refreshing, alarming, convincing book...exposes the fallacies behind the campaign for so-called 'gender neutrality.'" — The Charleston Post and Courier

"A stinging indictment.... Sommers [is] an expert at debunking shoddy (and trendy) research....The War Against Boys bristles with examples of the kind that send parents fleeing from the public schools.... Christina Hoff Sommers has written...an indispensable book." — National Review

"A brilliant exposé of the falsehoods used to justify pro-feminist education....a necessary piece of corrective research." — The Vancouver Sun

"[Sommers] has a keen intellect, sense of fairness, and a deep respect for facts.... [She] is at her best in calling liberal genderists to account for their lack of authenticated research." — Richmond Times-Dispatch

"[C]onvincing, even devastating.... A sharp study that raises troubling questions about the integrity of the research underlying much current educational polemic — and the policies that these polemics have inspired." — Kirkus Reviews (starred review)

"[I]t is now boys who face the more formidable obstacles. In her new book, Christina Hoff Sommers makes the most comprehensive contribution yet to this reassessment. [Her] data are hard to quarrel with.... The growing catalog of indicators showing girls pulling ahead and boys encountering serious difficulties suggest that Christina Hoff Sommers has identified a problem in urgent need of redress. But...like a number of other social scientists who have called attention to alarming trends only to be ridiculed and dismissed, and then eventually proved right, Christina Hoff Sommers appears to be well ahead of her time." — Commentary