The Words That Made Us 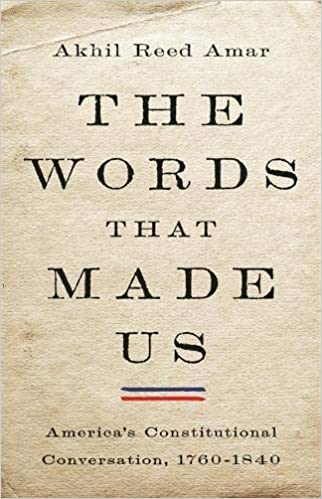 When the US Constitution won popular approval in 1788, it was the culmination of thirty years of passionate argument over the nature of government. But ratification hardly ended the conversation. For the next half century, ordinary Americans and statesmen alike continued to wrestle with weighty questions in the halls of government and in the pages of newspapers. Should the nation’s borders be expanded? Should America allow slavery to spread westward? What rights should Indian nations hold? What was the proper role of the judicial branch?

In The Words that Made Us, Akhil Reed Amar unites history and law in a vivid narrative of the biggest constitutional questions early Americans confronted, and he expertly assesses the answers they offered. His account of the document’s origins and consolidation is a guide for anyone seeking to properly understand America’s Constitution today.

"Akhil Reed Amar, the Sterling Professor of Law and Political Science at Yale, explores this territory brilliantly in The Words That Made Us, his deeply probing, highly readable study of ‘America’s constitutional conversation’ from 1760 to 1840.... In addition to educating the Americans engaged in this discussion about their rich constitutional legacy, the book has a generous spirit that can be a much-needed balm in these troubled times." — Adam Cohen, The New York Times  (Read the full review)

"Amar's fresh and fascinating book focuses on the explosion of impassioned discourse that culminated in, and followed, the ratification of the U.S. Constitution. As the title suggests, the book elevates the importance of dialogue and debate in cementing American identity." — Christian Science Monitor  (Read the full review)

"Akhil Reed Amar’s fascinating book The Words That Made Us: America's Constitutional Conversation, 1760–1840 [is] a masterly synthesis of history and law, Mr. Amar’s tome delivers, as the author describes it, a wide-angled, multigenerational narrative of ‘the American constitutional project.’ Revolutionary America is remembered for its physical action: 'bullets flew, tea chests splashed, cannons roared.' Yet, Mr. Amar argues, that’s only half the story. 'A cannon can roar but it cannot speak.' Listening in on the Founding Fathers, Mr. Amar traces 'America’s constitutional conversation' from 1760 to 1840.... Readers of The Words That Made Us will rightly marvel at its breadth and depth and at Mr. Amar’s scholarly acumen. Sequel volumes—covering 1840 to 1920 and 1920 to 2000—are planned, making for a constitutional trilogy." — Mark G. Spencer, The Wall Street Journal  (Read the full review)

"Every once in a while a book comes along that can simultaneously enlighten and engross you by taking a seemingly esoteric subject and turning it into an absorbing page-turner. Professor Amar has penned a marvelous tale of how our uniquely American Constitution came to be and the larger than life characters that conceived, gave birth, and nurtured our system of self-government.... The chapters seem to fly by with Professor Amar's engaging and conversational writing style along with his incisive and balanced analysis of the critical events, people, and documents that made America not merely a collection of states, but truly the United States of America." — Jerry Lenaburg, New York Journal of Books  (Read the full review)

"The Words That Made Us is Amar’s most ambitious work yet, the first book of what he envisions to be a definitive three-volume reinterpretation of constitutional history and legal analysis. The work, with its comprehensive scope, incisive analysis, and storyteller’s gifts, is frequently provocative and sweeping in its simultaneous grasp of politics and law.... Amar’s use of biography and narrative history brings these stories to life. For Amar at his best, context is the key to retelling his account of the American constitutional conversation.... Amar’s aspiration in The Words That Made Us is to join such earlier classic works as George Bancroft’s History of the Formation of the Constitution of the United States of America (1882) and Gordon Wood’s The Creation of the American Republic, 1776–1787 (1969). With this first volume, Amar is well on his way." — Joel Seligman, Los Angeles Review of Books  (Read the full review)

"The U.S. collectively talked and wrote its way into being, according to this dazzling constitutional history…. The author frames this history as a series of 'conversations' among the founders in formal congresses and informal letter-writing circles, and among ordinary people through newspapers, pamphlets, cartoons, and elections. Against modern historians and legal scholars who condemn the constitutional order as a bulwark of elite dominion, Amar advances a neo-Federalist defense of it as a deeply democratic, if imperfect, blueprint for stable liberty. This is no arid exercise in legal theory: Amar ties searching constitutional analysis into a gripping narrative of war, popular tumults, political intrigue, and even fashion, highlighted by vivid profiles of statesmen…. The result is a fresh, invigorating take on America’s founding that puts epic deliberation at the heart of democracy." — Publishers Weekly (starred review)  (Read the full review)

"A page-turning doorstop history of how early American courts and politicians interpreted the Constitution. A Yale professor of law and political science, Amar has written numerous books on constitutional matters. In his latest excellent analysis, the author emphasizes that Americans debated the nature of government for 30 years before the Constitution’s approval in 1788, and much of this occurred in courtrooms. Scholars have not ignored this or what followed, but Amar—who points out that most historians lack training in law and most lawyers are not knowledgeable enough about history—delivers a fascinating, often jolting interpretation. Perhaps most ingeniously, he asks, who is ‘the father of the constitution?’ The traditional answer is James Madison, who participated in the major debates, kept the best records, and worked tirelessly for ratification. However, few of his ideas survived the debates, and others were attributed to him in error. Amar leans toward Washington, who ‘uniquely…got everything he wanted.’ The Constitution’s most ‘distinctive feature,’ its ‘breathtakingly strong chief executive…owed more to Washington alone than to all the other delegates combined.’ Ranking other Founding Fathers, Amar places Hamilton second. A brilliant legal mind, he converted the Constitution’s sketchy articles into the strong executive that Washington envisioned. Adams and Jefferson fare badly. Both were absent from the Philadelphia convention, and Jefferson was never more than lukewarm about the results. Madison also comes up short. His conception of the Constitution never envisioned a powerful executive, and once he saw this happening, he turned against Washington, ‘partly to save his own political skin back in Virginia, partly because he was a policy lightweight on certain big issues (including banks, trade, and national defense), and partly because he was smitten by Jefferson.’ Amar gives high marks to Chief Justice John Marshall, but his discussion of Andrew Jackson is unlikely to rescue that president’s plummeting reputation. Focusing on the Constitution, he emphasizes Jackson’s fierce opposition to the concept of state sovereignty promoted by John C. Calhoun, which permitted nullification and perhaps even secession. Brilliant insights into America’s founding document." — Kirkus Reviews (starred review)

"This first volume of a proposed trilogy about the U.S. Constitution (each book to treat an 80-year span) sweeps forward from 1760 to 1840 in an audacious review of the Constitution’s origins, growth, development, and implementation, and the experiences and exchanges that produced its core principles and precedents. Amar blends biographical narratives with constitutional analysis to consider the American Revolution, the Confederation years, the Constitutional Convention, and the early national period. He discusses the thinking and interplay of framers George Washington, Alexander Hamilton, John Adams, Thomas Jefferson, and James Madison, and early shapers of constitutional law, including Chief Justice John Marshall and Justice Joseph Story. Amar’s multifaceted treatment of the start of the U.S. constitutional project illustrates much about our historical memory and demonstrates that there is far more to the constitution than the document itself; all this complicates its understanding. Although sometimes dense in detail, Amar’s original work offers general readers an accessible and often entertaining narrative and lessons to glean from the founding document of the United States. The wide range of material covered in the book will give scholars plenty of interpretations to engage with." — Library Journal (starred review)

"In The Words That Made Us, Amar offers a fresh look at the ideas that shaped the Revolution, constitutional framing, and early republic.... Amar also provides masterful discussions of important Supreme Court cases.... Consider the magnitude of Amar’s achievement. He has written a book both popular and learned, one that is fast-paced enough to hold the attention of the general reader and yet makes enough new points about fundamental matters to engage the serious scholar. And it comes a critical time. Amar shows why the Founding and the early republic deserve our continued respect even if many of the great men responsible for its creation had flaws of character and moral blind spots, as do we all. It a book not only of a scholar but a patriot. If widely read, it may make the difficulty of finding appropriate professional historians to teach our children less of a threat to our common future." — John O. McGinnis, Law & Liberty  (Read the full review)

"Wonderful.... Amar has left us with a great gift: a coherent national narrative that does not shy away from the gross moral imperfections and exclusionary nature of America’s early constitutional conversation, while still granting it—and its participants—the immense honor they are due." — The Dispatch

"A longtime Yale law professor, Amar is one of the nation’s leading scholars of constitutional law, so any time he publishes a book is a noteworthy event." — David Lat, Original Jurisidction

"Amar’s expert knowledge of the Constitution does not inhibit his ability as a wordsmith to tell this story in a manner that honors the complexity of the story and remains accessible to a broad range of readers. Every patriotic American should read this fascinating history." — Michael L. Ramsey, Roanoke Times  (Read the full review)

"The rarest of things – a constitutional romance. Amar, an eminent professor of law and political science at Yale, has great affection for his subject as a text that is worthy of loving engagement by scholars and the public at large." — The Washington Post

"Liberals urgently need to figure out why a longstanding and popular constitutional regime has fallen so far so fast, and what course corrections could regain traction. An instructive place to start would be a mammoth new history of the founding era, authored by Akhil Reed Amar. On its merits, his book has received acclaim across the ideological spectrum, as innovative and exhaustively researched scholarship." — Simon Lazarus, Democracy Journal