Till I End My Song

A Gathering of Last Poems 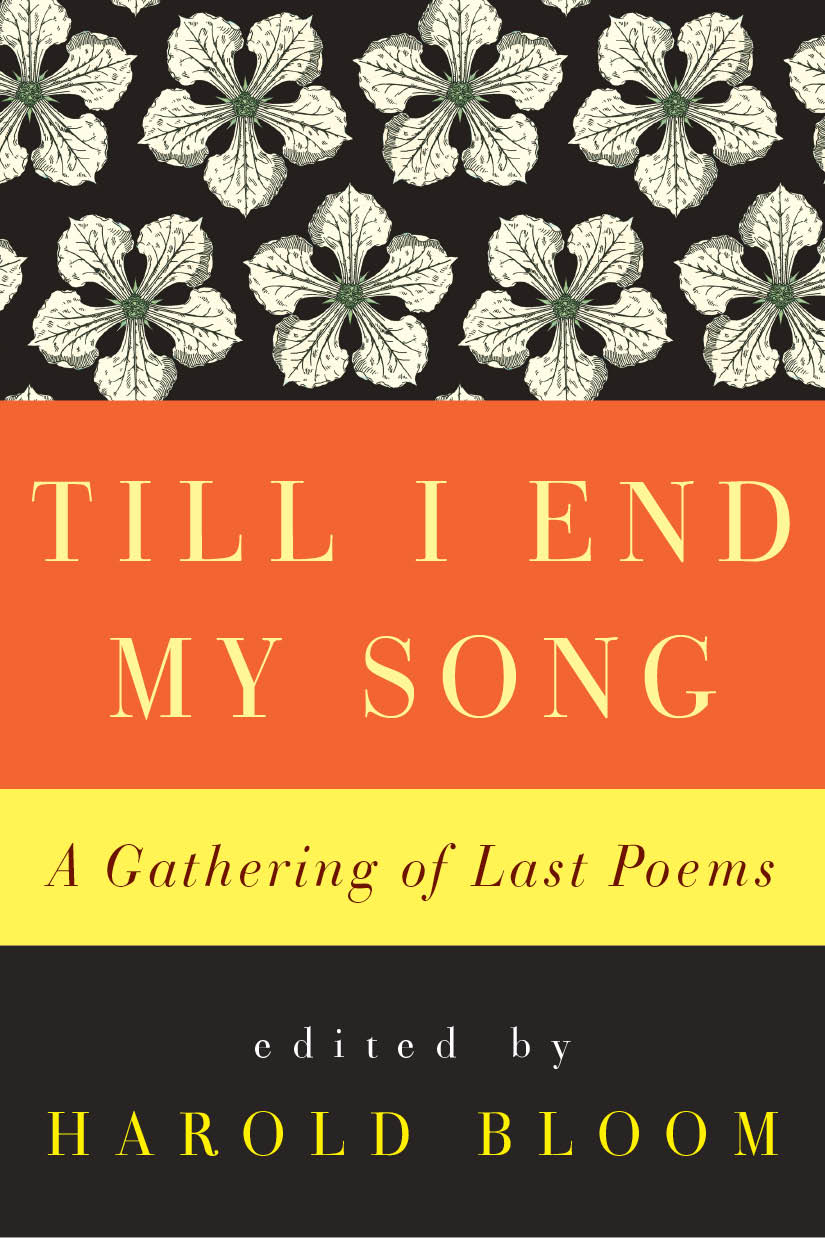 “We turn to ‘last poems’ at whatever age because we both desire and fear finalities. We want to know and not know the extent of our temporal spans, and we hope to learn from the poets not how to die but how to stand against uncertainty.”—Harold Bloom

In Till I End My Song, Harold Bloom selects the last poems of one hundred influential poets. These poems, written at either a literal or an imagined end, offer unique insight into the nature of art and the inevitability of death. Bloom’s anthology includes the work of well-known poets like T.S. Eliot, Alexander Pope, W.B. Yeats, Walt Whitman, Emily Dickinson, and Shakespeare, but also seldom read poets such as Conrad Aiken, William Cowper, Edwin Arlington Robinson, George Meredith, and Louis MacNeice. With Bloom's own lively commentary, Till I End My Song is a gem.

“A collection of surpassing splendor and resonance.”

"Literary critic and scholar Bloom has a passion for literary assemblages. He is also ardent in his articulation of the psychological, philosophical, and spiritual roles literature, especially poetry, plays in life, and in coping with death. So who better than Bloom to gather poets’ last poems? Bloom cites three kinds of ‘last poems.’ The first is the obvious, the ‘final poems’ composed by the 100 poets he holds dear. The second are poems ‘intended to mark the end,’ even though the poet continued to write, and the third are poems Bloom reads as ‘an imaginative conclusion to a poetic career’. His great favorites are here––Shakespeare, Milton, Yeats, Hopkins, Emerson, and Stevens, as well as Conrad Aiken, A. R. Ammons, James Merrill, Amy Clampitt, and Agha Shahid Ali. Bloom introduces each poet and poem with his signature blend of knowledge, ardor, and, facing his eightieth year, poignancy. These are poems that embrace change, time, life, the self, and death. Poems that have lasted and that will ‘reverberate into the coming silence’. A collection of surpassing splendor and resonance." — Booklist

"Bloom may be the most famous poetry critic in the English language. As he approached his 80th birthday, he turned his critical faculties toward the subject of death: this surprisingly enjoyable anthology contains the last poems—or the poems that most profoundly contemplate ‘lastness’—by 100 poets, from Edmund Spenser (d. 1599) to Agha Shahid Ali (d. 2001). Bloom seeks to show, through his selections and commentaries on each poem, that death can be as much an inspiration as a terror. With their last breaths, these poets address God (as John Donne does: ‘Wilt thou forgive that sin where I begun,/Which is my sin, though it were done before?’); future generations (Samuel Taylor Coleridge, in his ‘Epitaph,’ tells those who pass his gravestone, ‘Beneath this sod/A poet lies’ who ‘Found death in life’ and who hopes to ‘find life in death!’); a vast public and private self (Frost said, ‘I opened the door so my last look/Should be taken outside a house and book’). James Wright finds a new kind of life in the apprehension of his mortality: ‘How can I feel so warm/Here in the dead center of January?’ Throughout, Bloom’s brief prose comments illuminate and entertain." — Publishers Weekly (starred review)

"It is the kind of concept that only someone of Bloom’s intellectual stature could hope to attempt, and he pulls it off brilliantly, his comments on each of the one hundred choices as appealing as the poems themselves." — Nicholas A. Basbanes, Fine Books & Collections

"In Till I End My Song, Harold Bloom gathers 100 ‘last poems,’ from Edmund Spenser’s ‘Prothalamion’ (the source of the book’s title) to ‘The Veiled Suite,’ by the Kashmiri-American Agha Shahid Ali, who died in 2001. Bloom’s selections aren’t all actual last poems. Some were ‘intended to mark the end’ though the poet lived and wrote on; others, says Bloom, merely ‘seem…an imaginative conclusion to a poetic career.’ These definitions allow for idiosyncrasies of taste, which, in mini-essays preceding each selection, Bloom delivers as genial, sometimes bemusing judgments…. Readers interested in consolation should look elsewhere, unless like Bloom they find consolation in clarity and ferocity of vision about death’s reality. There are surprises here." — Daisy Fried, The New York Times Book Review