Voice for the Mad

A Biography of Dorothea Dix 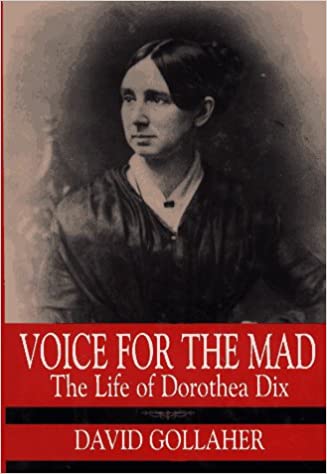 "With single-minded determination, Dix (1802-1887), a New England school teacher, succeeded in drawing national attention to the appalling treatment of the mentally ill. In this exhaustive study, Gollaher describes Dix's investigations of jails and almshouses where the mentally ill were cruelly imprisoned in filthy conditions. Her detailed reports of these visits resulted in the founding of state asylums.... Her commitment resulted in important reforms." — Publishers Weekly

"Voice for the Mad provides a vivid portrayal of one of the most significant figures of American history. It deserves to be widely read." — Reviews in American History

"Dix has long merited a full-scale biography. Advocating a public responsibility for the care of the mentally ill, she founded a large number of asylums and lobbied for mental health reforms. During the Civil War, she organized Union nurses, although she never gained the credit awarded Clara Barton and Mary Bickerdyke. Her career offers an instructive counterpoint to those of women abolitionists and advocates of women’s rights; while she was active in politics, she never questioned traditional gender-defined roles in American society. Gollaher weaves his knowledge of mental health care throughout the text…. Readers will find his rediscovery of Dix a blend of compelling reading and evenhanded assessments." — Library Journal

"A compassionate portrait of a complicated 19th-century woman who converted the conventions of genteel ‘femininity’ into a substantial public career. Dorothea Dix, advocate for the impoverished mentally ill and founder of the asylum movement, knew whereof she spoke. Battling periodic depression, the chronically restive Dix also overcame anxieties connected with her gender and social class identity, forming complex sympathies, antipathies, and remedies regarding all things vulnerable. The sudden downward mobility occasioned by the murder of her grandfather, an enterprising apothecary, in 1809; her shiftless father's irresponsibility and neglect of his own family; and other factors fortified Dix and led her to pretend she was orphan when as a young woman she gained access to Boston society. Never married, she traveled from New England through the South, visiting prisons and almshouses, raising money, calling on elected officials, and righteously raising public awareness of the plight of the poor and mentally ill. Sailing under the banner of selfless service, Dix founded 30 ‘lunatic’ asylums across the United States…. Gollaher deftly avoids situating Dix too firmly in political or cultural history, instead revealing her personality, her complex and powerful sympathies for certain kinds of suffering, her racial prejudices, crusading tone, and increasingly difficult ego on the job. This thoughtful biography makes real a problematic personality who created a movement as she also created herself." — Kirkus Reviews

"Gollaher's biography, the first to be based fully on Dix's voluminous personal papers, offers a sophisticated account of the personal costs and public benefits of her formidable commitment to her crusade.... Gollaher is a highly sophisticated historian as well as a shrewd biographer." — Boston Sunday Globe

"Gollaher...has a fine ear for prose, considerable narrative talent, and a knack for placing the events of his subject's life in a wider historical context." — A&E Monthly