The Final Years and Forgotten Struggle 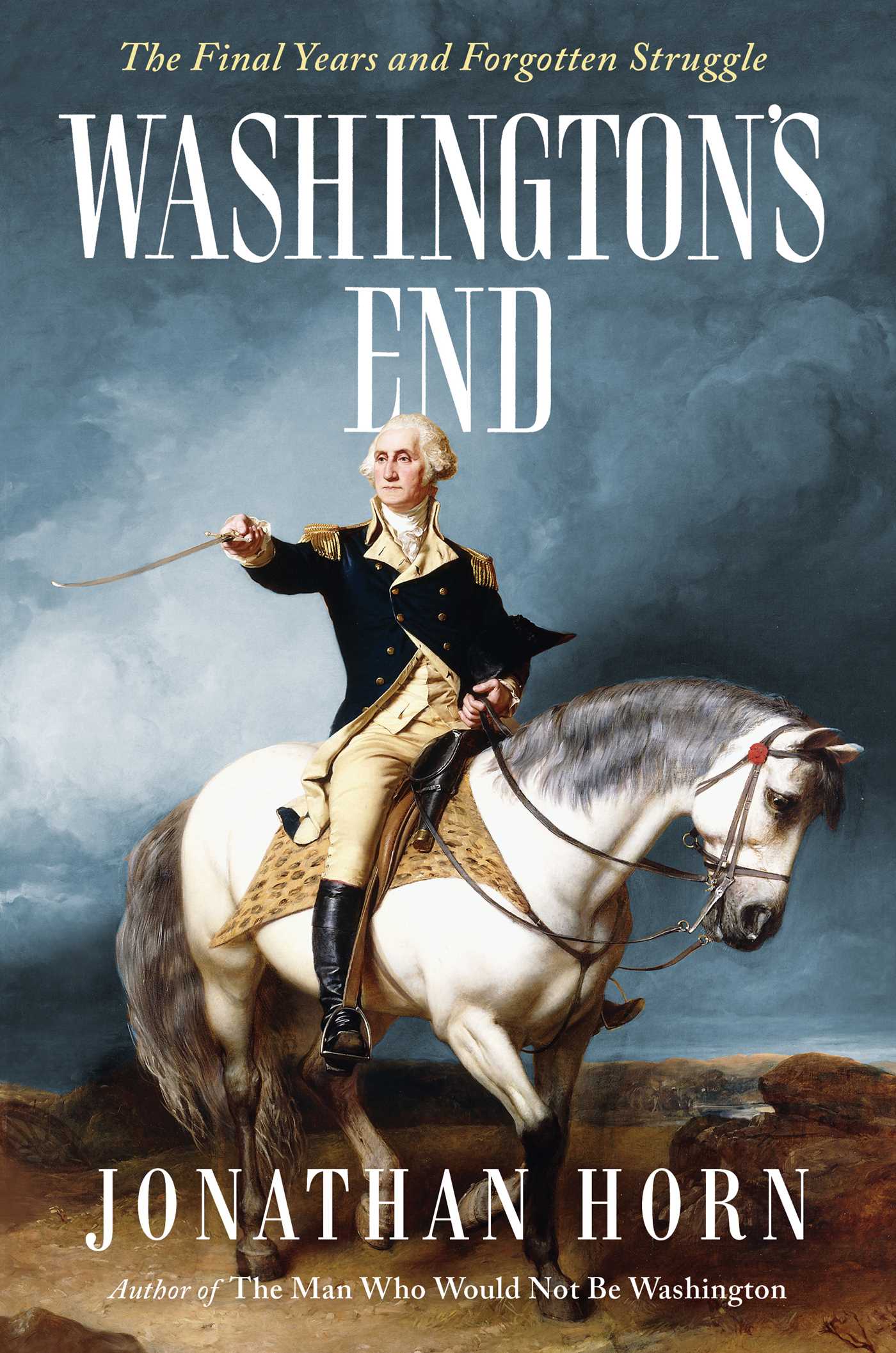 Washington’s End begins where most biographies of George Washington leave off, with the first president exiting office after eight years and entering what would become the most bewildering stage of his life. Embittered by partisan criticism and eager to return to his farm, Washington assumed a role for which there was no precedent at a time when the kings across the ocean yielded their crowns only upon losing their heads. In a different sense, Washington would lose his head, too.

In this riveting read, bestselling author Jonathan Horn reveals that the quest to surrender power proved more difficult than Washington imagined and brought his life to an end he never expected. The statesman who had staked his legacy on withdrawing from public life would feud with his successors and find himself drawn back into military command. The patriarch who had dedicated his life to uniting his country would leave his name to a new capital city destined to become synonymous with political divisions.

A vivid story, immaculately researched and powerfully told through the eyes not only of Washington but also of his family members, friends, and foes, Washington’s End fills a crucial gap in our nation’s history and will forever change the way we view the name Washington.

"A scholar of American history and former presidential speechwriter delves into the last poignant years of the first president and his struggle to define his legacy. Finally leaving the nation’s capital of Philadelphia upon his successor’s inauguration on March 4, 1797, bound for his beloved Virginia home, Mount Vernon, George Washington did not realize how arduous his retirement was going to prove after eight years as president. He was 65 and healthy, yet the pressures were enormous, as Horn clearly delineates in this welcome new biography of “America’s first post-presidency.” Mount Vernon was bleeding money and in disarray, requiring countless repairs. Washington was in debt and could not rid himself of his numerous slaves because they belonged to the estate of his wife’s first husband. Furthermore, the construction of the new capital, Washington, was proving a headache of epic proportions—as was tension with France, prompting the new president, John Adams, to appoint Washington as commander in chief just when he was hoping to be left alone as a private citizen. In addition to entertaining numerous guests, including “a party of French princes, cousins to the guillotined king,” at Mount Vernon, Washington had to deal with his stepson “Wash,” who was turning out to be a loafer and miscreant. His dear friend the Marquis de Lafayette was imprisoned in Austria amid the French Revolution, prompting his wife to send the marquis’ teenage son to America to live with the former president as a refugee, though the president felt guilty for not being able to publicly shelter the boy sooner. In a readable style that includes an appropriate amount of quoting from primary sources, Horn ably captures the tension of Washington’s inner turmoil as he continued to deal with urgent dispatches and unwanted news from the capital. A useful biography that provides an honest reckoning of Washington’s life and legacy." — Kirkus Reviews

"Former White House speechwriter Horn examines the last two years (1797-1799) of George Washington’s life, providing a portrait of a figure who still held political influence upon leaving office. The author is at his best when revealing the political dynamics of the Federalists as well as the Democratic-Republican Party founded by Thomas Jefferson and James Madison in the early 1790s. Bitterness and intrigue developed between political factions, which Washington warned about in his notable 1796 farewell address, and the former president’s stance of neutrality towards the French Revolution and the rise of Napoleon Bonaparte only added to the divide. Horn details the politician’s efforts to return to private life at Mount Vernon, and considers the role of slavery and Washington’s views on the institution. Of note is a fascinating section on how Washington influenced the development of his namesake city: Washington, DC. VERDICT: An outstanding biographical work on one of America’s most prominent leaders. Highly recommended for those who want to better understand the early republic." — Library Journal

"A poignant look at the father of his country in the twilight of his life. Horn has a fluid, pleasing style, with stately cadences that suit his subject…. As Horn makes clear, Washington was old for his age; his hearing and memory had begun to fail, and his primitive dentures were a constant torment…. An air of melancholy hangs over Horn’s tale. When Washington died, the republic that he had led remained a narrow strip of settlement on the Eastern seaboard, and what Jefferson called ‘the vaunted scene of Europe’ remained the principal stage of history. Washington’s retirement fell short of his gauzy vision of living ‘under the shadow of my own vine and my own fig tree.’ The long and fruitful collaboration with his fellow Virginians Jefferson, James Madison, and James Monroe had collapsed in acrimony. The vexations of foreign affairs, ceaseless political strife, and even the stubbornness of the soil at Mount Vernon robbed him of the serenity of which he had dreamed. But whatever frustrations he may have had as a farmer, Washington had sown the seeds of a vast American future.’" — Michael F. Bishop, National Review

"Using meticulous research, Horn demonstrates how ‘peace’ eluded Washington throughout his retirement, which was repeatedly interrupted by partisan attacks, tensions with political allies, and the specter of war with France. Underlying these challenges was Washington’s quiet campaign to navigate his new role as a ‘private citizen,’ a position upon which the legitimacy of America’s democratic system fundamentally depended. Although Horn centers his story on Washington’s final three years, he finds unique ways to exceed the boundaries of this narrow frame…. As Horn lays out over the course of his work, Washington’s dedication to balancing competing interests dominated his retirement almost with the same intensity that it defined his generalship and his presidency." — Nicole Penn, The American Interest

"The historical memory of George Washington frequently dims or ends at his Farewell Address in 1796, when he offered sage advice to his fellow Americans on both domestic and foreign policy. The final three years of Washington’s life, however, were eventful for the former president and the nation, and Jonathan Horn in his new book Washington’s End provides a captivating and enlightening look at Washington’s post-presidential life and the politically divided country that was part of his legacy." — Francis P. Sempa, New York Journal of Books  (Read the full review)

"Picking up where most biographies leave off, Horn reveals the final few year of Washington’s life, after the presidency. From the way the country struggled in his absence to the struggles he had with health, friends, family, and farm. It makes George truly a 3-D real human being." — Jack Riccardi, Jack's Books, KTSA

"Insightful.... Beginning with the March 1797 transfer of power between Washington and his successor, John Adams, Horn follows the ex-president home to his Mount Vernon estate, where he planned to occupy himself with, in his words, “rural amusements,” but instead was drawn into political squabbles between Republicans and Federalists and rising tensions between the U.S. and France. Asked by Adams to resume command of the armed forces in preparation for a French invasion that never happened, Washington agreed so long as he could select his own general staff. His decision to install Alexander Hamilton as his second-in-command infuriated Adams and led to a string of disputes between the current and former presidents that lasted until Washington’s death in 1799. Quoting extensively from diaries, letters, newspaper accounts, and memoirs, Horn presents an intimate portrait of Washington’s relationships.... [Those] curious about this neglected chapter of Washington’s life will savor this immersive account." — Publishers Weekly