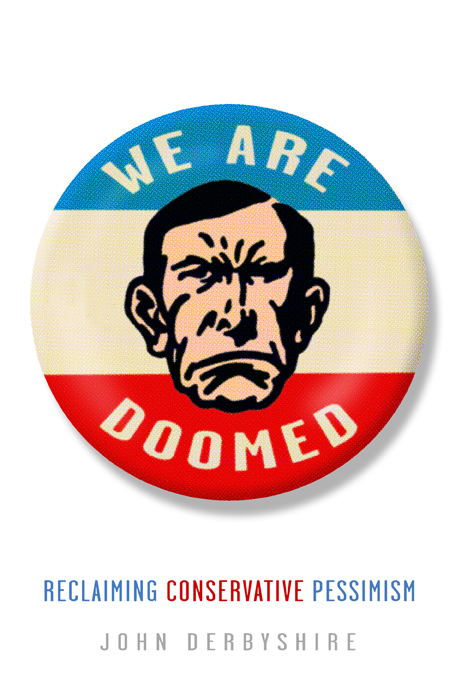 Derbyshire aims in this book to pour cold water on all "schemes for political improvement," both at home and abroad, to argue that our civilization is in its twilight, and to show that while there are things we could do to save the situation, we won't do any of them, because we have sunk into a collective mindset that won't let us. Hence: We are doomed.

It's not a frivolous subject. Still, every sinking ship should, like the Titanic, have a band playing on deck as she goes down. He aims to bring the bad news with a light touch, to highlight some of the ironies, and to emulate the late, great Samuel Beckett, who seasoned his sermons on futility ("we give birth astride a grave") with jokes and slapstick.Furthermore, the acquiescence of conservatives in the happy talk has been a big part of the problem. That should never have happened. Conservatism ought to be pessimistic. It has always had a strong streak of pessimism, from Hobbes and Burke, through Lord Salisbury and Calvin Coolidge, to Pat Buchanan (DEATH OF THE WEST) and Mark Steyn (AMERICA ALONE) in our own time. Derbyshire aims to out-gloom all of them, thereby sparking a needed debate within conservatism as to the proper temperament of the movement.

Additionally, too many conservatives are, for social and psychological reasons, turning their faces resolutely away from the new understandings of human nature beginning to be revealed by the human sciences. Yes (we now know, to high probabilities), there are innate, intractable differences between the sexes, and between races. No, not all nations are capable of rational, consensual government. No, crime is not a consequence of poverty or neglect. No, not every child is educable beyond elementary reading and arithmetic skills. No, parenting style does not determine life outcomes, nor even affect them much. A human being is at least half finished at birth; subsequent interventions have small, and often only temporary, effects.

While conservatives have been failing to face these glum truths about the human condition, liberals have been developing a pessimistic style all their own, preaching the irredeemable corruption of man (at least, of white male heterosexual man) and the advent of catastrophe by global warming or resource depletion. But this is really bogus pessimism, a loss leader for liberalism's real bill of goods. The left is, as it has always been, the party of heaven, seeking to transform us into angels fit to live in their utopia of perfect equality. Conservatives are the true party of earth, seeking in human nature as it is for the drives and restraints that make civilized society possible. No happy talk, no wishful thinking for us; only a cold eye for a cold world, for fallible humanity, and for Western civilization—so painfully won, so precariously held, and now slipping irretrievably from our grasp.

WE ARE DOOMED will seek to reclaim a proper conservative pessimism from the faux pessimism of the left. Why should the Devil have all the best tunes?