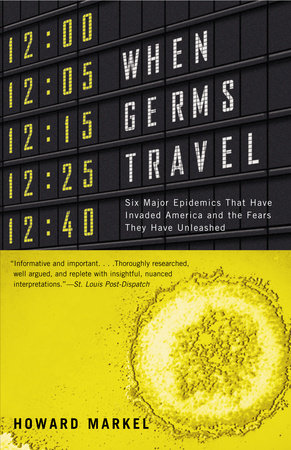 Tuberculosis. AIDS. Cholera. Ebola Fever. Influenza. Courtesy of universal international travel, contagious disease today can span the world with lightning speed, in ever-mutating, newly-virulent forms. Might our globalized world be on the brink of a return to the worldwide pandemics of the last century, which once carried off thousands, even millions, of people? Are we all now inhabitants of the Hot Zone? Markel warns that this is still possible—more so than we may think. It is much harder now to track new diseases to their source than it was at the dawn of the modern era of public health. When Germs Travel tells the story of the meticulous forensic detective work of the dedicated doctors who grappled with disease outbreaks from the late 1890s to the present. These gripping stories will intrigue and enlighten anyone concerned about the other big threat to national security with body counts comparable to world war—contagious disease.

"Engaging.... Germs are nature's primordial terrorists. The language of terror we encounter in our daily news is everywhere in this book.... Indeed, one of the accepted definitions of terror as 'living in dread of death or outrage' conveys quite well how epidemics have been experienced throughout history and in the six cases presented in this book.... Fascinating.... The narrative is brisk and highly readable. No two 'invasions' are the same, and the public health goals of avoiding overly restrictive measures during an epidemic while not ignoring the risks between epidemics need to be constantly reemphasized.... Reading When Germs Travel is a rewarding yet disturbing trip." — New England Journal of Medicine

"A fascinating, sometimes gripping description of the often infelicitous intersection of infectious diseases and official U.S. public health policy.... A subtitle of this book might well have been 'Man's continuing inhumanity to man.'" — Journal of the American Medical Association (JAMA)

"Even if threats like Asian flu and bioterrorism don't keep you up at night, this 2004 chronicle of epidemics in America is worth reading purely for the historical dramas it relates. The New England Journal of Medicine described the book as, 'Engaging.... Fascinating...the narrative is brisk and highly readable.... Reading When Germs Travel is a rewarding yet disturbing trip.'" — The New Republic

"Markel offers a crisp, brisk and matter-of-fact narrative that can be more chilling than anything Stephen King has ever committed to paper.... This important cautionary tale proves infectiously readable." — Flint Journal Review (Michigan)

"A highly readable account of the continuing struggle to contain the deadly microbes that have plagued human beings for centuries. With great attention to detail, the author examines the history and evolution of six major diseases.... He explains how each was able to get a foothold in America mainly because of our porous borders and the mobility of our people. Markel...does more than just explore the way each of the epidemics was spread, however. He addresses the human elements as well. The result is a book that is much more dramatic and graphic.... One of the better books about the past, present, future of infectious disease." — Tucson Citizen

"In this informative and important book, Howard Markel...recounts the history of six infectious outbreaks in the United States, each of which broke out in association with the waves of immigration to the country. He writes of epidemics of trachoma, cholera, bubonic plague and typhus that occurred in association with immigration a century ago, and of outbreaks of AIDS and tuberculosis that have occurred in recent times. For each epidemic, he weaves a vivid description of the natural history of the disease with an account of how the disease entered the United States, spread and ultimately faded away. Markel portrays these events through engrossing stories of individual victims who suffered the disease — the East European rabbi with trachoma, the Haitian refugee with AIDS, the Chinese immigrant with the bubonic plague. He describes the response of public-health officials to the epidemics and shows how these outbreaks shaped our society and changed our world.... [He] tells these stories in an enthralling fashion. His ability to make medicine accessible and understandable to lay readers is remarkable. Yet, the book is also thoroughly researched, well argued and replete with insightful, nuanced interpretations. Scholars will find it of value as well. Perhaps the book's most notable feature is its illumination of public-health issues of the present. As Markel shows, the great obstacle in establishing effective public-health programs is apathy. Successful public-health programs are silent in nature. Few diseases break out, and those that do are quickly contained. Such successes easily lead to public overconfidence and the tendency to stop investing further to keep our public-health programs strong. Yet, as Markel writes: 'We never really conquer germs. We merely wrestle with them to a draw.' The recent worldwide outbreak of SARS is only the most recent reminder of the truth of this observation." — St. Louis Post-Dispatch

"A compelling book.... [Markel] recounts one atrocity after another committed in the name of public health.... Markel's accounts are powerful and his documentation extensive. Time and again, Markel shows, Americans have responded to viruses and bacteria with xenophobia, racism, and moral and ethical blindness. Everyone who considers the United States a nation of civilized people should read this book." — Wilson Quarterly

"Of all the invasions of a person's space, infection is the most insidious. And, for many, the arrival of refugees and other migrants is seen as a threat. No wonder, then, that the perception that space-stealing interlopers also carry transmissible germs creates fear. In eloquent prose, Howard Markel reviews the association of infectious diseases with immigrant populations to the USA." — The Lancet

"Outbreaks of SARS and anthrax attacks through the mail have had plenty of people rubbing their hands with antibacterial lotion. But Howard Markel, director of the Center for the History of Medicine, at the University of Michigan Medical School, says an outbreak of tuberculosis is a scarier prospect. In When Germs Travel, Dr. Markel analyzes the case histories of six epidemics that plagued Americans in the 20th century. He takes a bleak view of politicians' willingness to prevent such health threats before they occur, arguing that inertia, the steadfast failure to act definitely in the face of crisis, remains the most difficult trend to reverse." — Chronicle of Higher Education

"Dr. Markel's...presentation is deft, interesting and informative. Markel concentrates on diseases brought (presumably) into the United States by immigrants. He focuses on six diseases — tuberculosis, bubonic plague, HIV/AIDS, trachoma, typhus and cholera. He builds his narrative around individuals and specific cities, transcending the clinical and the bacteriological. He presents the often monolithic and mechanical approach of immigration authorities and the fear and frustration of the immigrant looking for the land of liberty and opportunity. He writes well and is neither judgmental nor lachrymose about the ailing immigrant though the helplessness faced by the laws of an unknown country is frequently brought out. He introduces serious discussions of the history of bacteriology and bacteriologists and the medical and federal aspects of public health." — The Roanoke Times

"Markel is...an astute observer of the fierce historical battles between people and germs, and he reminds us that the war goes on and on.... Well-written and approachable." — Ann Arbor News

"Markel writes, with great attention to the human side of the story, about the spread of tuberculosis, bubonic plague, AIDS, trachoma, and typhus. It's a powerful, sweeping story about immigration, poverty, public health, scientific breakthroughs, and medical failures." — Chicago Free Press

"A critically important book for this historical moment.... A clarion call for the public (and the government) to recognize both the importance and the precariousness of public health as we enter the twenty-first century." — Health Affairs

"Fear of the other is a ubiquitous human condition. We are afraid of that which is unfamiliar, sometimes with good reason, but usually with note. In this very readable book, Markel chronicles yet another way in which this fear has played a critical role in the history of the U.S. — a nation built from collections of others. In addition to telling a fascinating historical story...this book reminds us all that prejudice, no less than science, often drives health policy." — Jerusalem Post

"Markel, a professor of the history of medicine at the University of Michigan and a practicing physician, argues that quarantines in the U.S. and other restrictive measures are based more on xenophobia than on science.... Markel argues that though quarantines of immigrant populations may have lessened the chance of major epidemics during the early 1900s, such measures unfairly punish people for being poor and sick.... As increased travel continues to shrink distances and bring people together, germs will also travel more easily; the prevalence of infectious disease, therefore, is no longer merely a local issue. As Markel warns in this informative and important book, we must work to prevent and treat infectious diseases throughout the entire world because 'in public health terms, every city is a sister city with every other metropolis on earth.'" — Publishers Weekly

"A wonderful look at how infectious diseases have shaped society and changed our world. Howard Markel writes beautifully, and his perspective as both a trained historian and a dedicated physician make him a writer like no other." — Abraham Verghese, Director, Center for Medical Humanities and Ethics, University of Texas Health Science Center at San Antonio

"Dr. Markel has a gift for making medicine and the science of it accessible and understandable and, most importantly, interesting. He is both passionate and compassionate about his subject and conveys this devotion in a clear, precise, gentle prose that is in the tradition of such great doctor-writers as A. J. Cronin, Somerset Maugham, Sherwin Nuland, Lewis Thomas, and William Carlos Williams; doctors for whom the patient was the important part of the story most necessary for breaking the reader's heart." — Larry Kramer, author of REPORTS FROM THE HOLOCAUST, THE NORMAL HEART, and THE DESTINY OF ME

"Dr. Markel is an epic historian, a wise scientist, and an elegant prose stylist whose account of six infectious outbreaks is really a description of human foibles and the politics of paranoia. Written with humor, grace, insight, and warmth, When Germs Travel is a discerning portrait of illness, a comment on the immigrant experiences of the past and present, and a reflection on what it means to be a doctor in a society ruled by fear of contagion." — Andrew Solomon, author of THE NOONDAY DEMON and winner of the National Book Award

"A timely book. Markel, a medical historian and himself a physician, knows that the so-called general reader needs to be guided through the maze of technicalities, as he does the guiding in a text as readable as it is reliable. It reads like a thriller." — Peter Gay, Sterling Professor of History Emeritus, Yale University

"Markel proves just how compelling medical history can be in these lucid, thought-provoking accounts of the complex intersection of immigration policy and public health." — Andrea Barrett, author of SHIP FEVER AND OTHER STORIES and winner of the National Book Award