Greek Wisdom and the Abandonment of Classical Learning 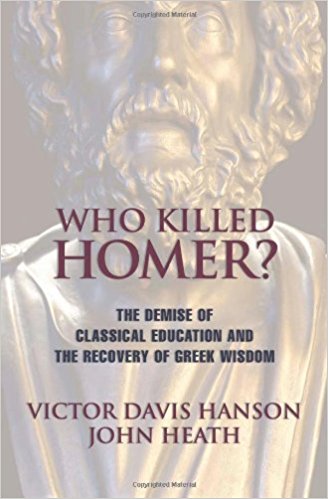 "Juvenalian ridicule, Ciceronian argument, and Cato-like censure animate a lively defense of the deadest of dead languages and dead white European males. Cynicism, skepticism, and invective are all Greek and Latin concepts, as Hanson and Heath remind their readers while ruthlessly employing the same in this debate over the decline and fall of Classics. Killing off Homer and the teaching thereof, they argue in their impassioned philippic, was 'an inside job by elite philologists and of the present age.' ...Hanson and Heath are not so much right-wing revisionists as passionate Hellenists whose belief in Greece and Rome's central role in Western civilization is fervent and articulate. Writing against the multicultural grain, they stress the unique aspects of Greek and Roman society, e.g., the idea of open dissent in the polis and the concept of civilian militias and citizen-soldiers, and maintain the continued importance of THE ILIAD and THE ODYSSEY.... An elegy that slaughters a hecatomb of sacred cows along the way." — Kirkus Reviews