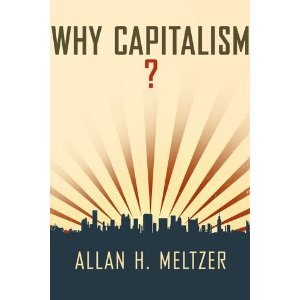 Today, capitalism is the economic system that guides most of the world—having overcome unremitting intellectual hostility, as well as military hostility from Communist nations in the Cold War.  Yet even China and formerly socialist India have embraced market economies.

Capitalist systems are not rigid, nor all they all same. Capitalism is unique in permitting change and adaptation, and so different societies tend to develop different forms of it. What all share is ownership of the means of production by individuals who remain relatively free to choose their activities, where they work, what they buy and sell, and at what prices.  As an institution for producing goods and services, capitalism’s success rests on a foundation of a rule of law, which protects individual rights to property, and, in the first instance, aligns rewards to values produced.  Working hand in hand with the rule of law, capitalism gives its participants incentives to act as society desires, typically rewarding hard work, intelligence, persistence and innovation.  If too many laws work against this, capitalism may suffer disruptions.  Capitalism embraces competition. Competition rewards those who build value, and buyers with choices and competitive prices.  Like any system, capitalism has successes and failures—but it is the only system known to humanity that increases both growth and freedom.

Instead of ending, as some critics suppose, capitalism continues to spread—and has spread to cultures as different as Brazil, Chile, China, Japan, and Korea.  It is the only system humans have found in which personal freedom, progress and opportunities coexist.  Most of the faults and flaws on which critics dwell are human faults.  Capitalism is the only system that adapts to all manner of cultural and institutional differences.  It continues to spread and adapt, and will for the foreseeable future.

"Allan H. Meltzer, the great economist of monetary affairs who died Tuesday [May 9, 2017] at age 89, was the consummate insider who understood the value of staying outside the government. Other than a short stint in the late 1980s as a member of the President’s Council of Economic Advisers, Meltzer made a distinguished career offering constructive criticism to the powers that be…. Meltzer was at the center of most of the great debates about the direction of U.S. economic policy.… His was a career born of deep and caring respect for the institutions of economic governance. Meltzer understood that economic decision-making is a powerful force in the life of nations, and he dedicated his life to ensuring that his profession performed that role with intellectual rigor and honesty for the public good." — The Wall Street Journal, Editorial, May 10, 2017  (Read the full review)

"Why Capitalism? asks Allan H. Meltzer, star professor at Carnegie Mellon University, and he sensibly answers: because it works…. For the distracted, part-time observer of our economic and financial affairs, Mr. Meltzer's slim volume may fill the bill. In less than 150 pages of text, he takes on the welfare state, bank regulators, America's fiscal mess and foreign aid." — James Grant, The Wall Street Journal

"It is possible to gain fascinating insights from every chapter…. Allan Meltzer has written an excellent book." — Geoffrey Wood, Central Banking Journal

"The book is short — just 160 pages — but its simple, clear, and direct language makes a big point: that capitalism 'is the only system known to humanity that increases both growth and freedom.' As a result, far from ending, capitalism has spread to formerly socialist or communist enclaves such as Eastern Europe, India, and even China. The book is not simply a paean to capitalism, though. It's also a look at some of the problems the country is facing, including the decline in the value of the dollar, the financial crisis and its aftermath, and the federal debt and deficit. Meltzer's three laws of regulation help in part to explain the crisis. The first is that 'lawyers and bureaucrats regulate,' but 'markets circumvent regulation.' Second, and related, is that 'regulations are static. Markets are dynamic.' Third, 'regulation is most effective when it changes the incentives of the regulated.' While Meltzer does not favor a return to a gold standard for the dollar, he does acknowledge that when it existed, 'governments could not run large, continuous, peacetime budget deficits.'… The list of living Americans who served in both the Kennedy and Reagan administrations and who are still writing books and teaching courses is a short one, a fact perhaps not lost on the students who fill up Prof. Meltzer’s elective class on capitalism at Carnegie Mellon’s Tepper School of Business. The university limits the size of the class to 60, and Mr. Meltzer mentions that even some other faculty members show up. For those of us who haven't had the opportunity to be colleagues or students of Professor Meltzer’s, Why Capitalism? is an excellent introduction." — Ira Stoll, New York Sun

"Actually, this recent short book by Professor Meltzer was quite a surprise. Even as short as it is, there is much more in it than the cogent defense of capitalism. First, the book could easily have been titled, “What is Capitalism?”—and just as important, what it is not…. Meltzer draws clear lines between the real thing and the crony mutation of capitalism, but he also stresses that even the best forms of capitalism are far from perfect and will always be less than ideal simply because we humans are flawed creatures…. Meltzer treats the critics of capitalism with considerable respect by carefully setting out the flaws in both their diagnoses and prescriptions…. A bonus for readers of Why Capitalism? is succinct summaries of Meltzer’s important work in diagnosing the failures of the International Monetary Fund and the World Bank and then offering prescriptions for redirecting these institutions in ways likely to better achieve their professed missions…. Meltzer’s excellent chapter on the origins of the epidemic of debts and deficits leads inevitably to a concluding chapter that sets forth convincing arguments as to why a trend toward higher inflation will plague the world for years to come." — Jerry Jordan, International Review of Economics & Finance

"Meltzer brings forth argument after argument to show how for all of its flaws, 'there is no better system for providing growth and personal freedom' than capitalism. Grounded in Kant's dictum that 'most of the faults and flaws on which critics dwell are human faults,' Meltzer defends capitalism while criticizing communism and socialism, the role of government and governmental policies (both historical and current), and the idea of redistribution of income. Too-big-to-fail and fiat currency also have their place in the mix, his choice of topics being both timely and pertinent. Out of these topics, it is government's reach, policies, regulations, and expansion that seem to have captured the author's attention. He sums up his stance succinctly: 'Much regulation invites corruption, arbitrary decisions, and circumvention.'... The book is both powerful and opinionated." — Publishers Weekly

"A concise alternative to current economic policies for those who look with suspicion at the writings of economists and financial specialists. The author presents three main reasons why capitalism should be defended…. and he argues forcefully for the case that capitalism can change and reform itself…. A lively, politically challenging contribution to a developing discussion on how to change international monetary arrangements." — Kirkus Reviews

"Meltzer is an eminent professor of economics at Carnegie-Mellon University. He is a world-renowned U.S. Federal Reserve scholar, a 1973 founder and chairman of the Shadow Open Market Committee, and an American Economic Association Distinguished Fellow. What else could he possibly add to those laurels? Meltzer has written Why Capitalism? Meltzer answers that question with personal and scholarly reflections on capitalism—the one economic system that achieves both prosperity and individual freedom…. Why Capitalism? is an ideal selection for small-book discussion groups, students, scholars, business people, and all who have an interest in capitalism’s ability to adapt and survive as ideologues attempt in vain to fashion more perfect systems from crooked timber." — Bruce Yandle, The Freeman

"If you want a realpolitik view of the world, Meltzer's your guy. You know right away that you are in for quite a ride when, in the introduction, he acknowledges the range of his influences, from Immanuel Kant (for example, human nature as ‘crooked timber’) to Karl Popper to Friedrich Hayek, and to Milton Friedman, among others. He takes you back in time and sketches from a broad perspective the old battle of capitalism versus communism and socialism, and extols the genius of the freedom of capitalism. For those interested in recounting the perils of government regulation and failed attempts at income distribution, it’s a treasure." — Journal of Environmental Investing

"In this Presidential election year, I suppose it’s appropriate that the best books I read were all by Americans, and all on politics. The Road To Freedom by Arthur C. Brooks and Why Capitalism? by Allan H. Meltzer are brilliantly succinct arguments for the necessity of free markets if we are to have free societies." — The Right Honorable Michael Gove, M.P., Secretary of State for Education, U.K., The Daily Mail (Dec. 1, 2012)

"Allan Meltzer’s Why Capitalism? is a thoughtful, historically-based analysis of the roles of government and free markets in a democratic society. Meltzer has thought deeply about the workings of both and has a good sense of which functions each best can be trusted to serve." — Robert Lucas, University of Chicago, 1995 Nobel Laureate in Economics