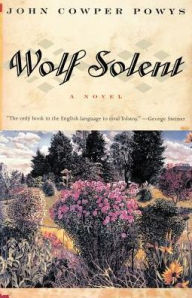 "The only book in the English language to rival Tolstoy."—George Steiner

“John Cowper Powys wrote what I have long considered to be the finest novel by an Englishman in the 20th century. Wolf Solent caused a sensation when it was published in 1929.... When he was nearly 90 Powys, who died in 1963 at the age of 91, wrote an introduction to a new printing of Wolf Solent in which he said that it was ‘a book of Nostalgia, written in a foreign country with the pen of a traveller in the ink-blood of his home’…. It is one of the truly outstanding works of English literature, demanding wider discovery and appreciation.”—Simon Heffer, The Telegraph, November 24, 2015

"A stupendous and rather glorious book...as beautiful and strange as an electric storm."—V. S. Pritchett

"A novelist of great, cumulative force and lyrical intensity.... Out of his rhapsodic style and keen attentiveness to nature, he builds a tower of prose to match the firmament."—Washington Post Book World

“Wolf Solent was the first of his six masterpieces, and it brought him some recognition. Set in the West Country, although written in America, its physical recall of landscape and townscape bears some kinship to James Joyce's written-in-exile Ulysses…. It is hard to describe how the peculiar thrill of this work is generated. Fields and riverbanks, flowers and trees, cottage interiors and manor houses, graveyards and small town shops and country inns, are described with meticulous precision, as in a mid-Victorian novel, but the atmosphere in which they exist is charged with a strange psychic intensity.... Thought processes are portrayed with a quivering, compulsive immediacy unlike anything else in fiction. The visions of a William Blake illuminate the domestic realism of Cranford, and are subjected to the remorseless psychological analysis of a Proust.”—Margaret Drabble, The Guardian

"Keats equated his initial reading of Chapman's Homer with an explorer's first view of the Pacific or an astronomer's glimpse of a new planet. Opening John Cowper Powys's Wolf Solent, reissued by Vintage, is a revelation on that order.... The author writes prose that is always on the threshold of poetry—sacramental, mesmerizing, of relentless power.... Wolf Solent is a protean, inexhaustible, exhilarating book."—George Gurley, The Kansas City Star

"A brilliant book...beautifully managed and with the finest of inevitability."—Conrad Aiken

"He has made his novel one of the most beautiful and powerful written in our language in this century."—The Bookman

“Wolf Solent is a modern prose Hamlet, Powys has established the modernity of Shakespeare!”—Percy Hutchison, The New York Times

“Get out your list of books for immediate reading and place on it the name of Wolf Solent, by John Cowper Powys, preferably at the top, for it is a work that will repay you many-fold.”—Harry Hansen, New York World

“Its prose often rises to the cadence of poetry.  And beyond beauty, it sinks its shaft to a core of truth.”—Mary Ross, New York Herald Tribune

“Wolf Solent has the endlessness and the sure flow of a great river.”—Richard Lockridge, New York Sun

“Mr. Powys has revived the form and style of Hardy and has added thereto a feverish candor beyond even the daring of the great Victorian.”—Frederic F. Van de Water, New York Evening Post

“Powys is by turns an Emily Bronte, a wild creature of the health; a subtle, introspective Proust; a nature-enthralled Wordsworth; a Poe, journeying in deliberate search of horror; a Dostoyevsky, shaking with the mystic fever; even at rare moments, a Shakespeare hurling the ultimate dramatic word!”—Ernest Sutherland Bates, Saturday Review of Literature

“[Powys] is still ‘the master’ to me.  His words, even today, have the power of bewitching me.”—Henry Miller