Women Who Make the World Worse

and How Their Radical Feminist Assault Is Ruining Our Schools, Families, Military, and Sports 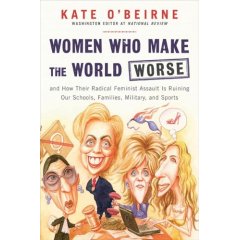 "Uh-oh, is this going to be another of those right-wing rants? Happily, it is anything but. Mrs. O’Beirne’s book is a serious examination of 30-plus years of feminist folly and the conservative counter-approach. And while the National Review columnist and TV commentator is not shy about saying what she thinks, the only rants that appear in her pages are those she quotes from some well-known feminist icons. In fact, one of the most striking features of WOMEN WHO MAKE THE WORLD WORSE is its ‘I can’t believe she said that’ quality. Mrs. O’Beirne informs her chapters on the family, day care, education, politics, the military and sports with a review of the radical feminist dogma on the subject. Anyone still operating under the delusion that ‘feminist’ is synonymous with ‘pro-woman’ should find this a useful reality check…. WOMEN WHO MAKE THE WORLD WORSE is a brief history of how wrong the gender warriors have been about virtually every aspect of American life. But it offers hope for the future in highlighting the scholarship of many women who make the world better." — Melanie Kirkpatrick , The Wall Street Journal

"Some women protest, ‘I'm a feminist, just not a radical feminist.’ Kate O'Beirne is impatient with such qualifications. She is not any kind of feminist, and when you finish her sparkling new book WOMEN WHO MAKE THE WORLD WORSE, you won't be one either…. Feminists have peddled more than their share of myths over the last 40 years—that women earn less than men for the same work; that domestic violence is rife within the traditional nuclear family; that women do not want to care for their young children and therefore require government-funded day care; that children do better in group care than with their mothers—and Kate O'Beirne debunks them all…. Kate is fearless and funny and a must read." — Mona Charen, The Washington Times