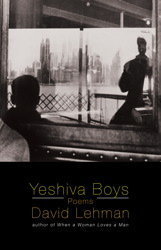 "Lehman, at once one of our most playful and thoughtful of poets, demonstrates an unprecedented range here. The book’s title derives from a sequence of 12 poems about growing up a religious Jew constantly trying to square his spiritual training with the absurdity, the sensuality, and the evil in the world. Elsewhere, Lehman uses many conveyances—including the prose poem, the sestina, and curt rhymes—to travel across the writing life of a poet whose instinctive romanticism is always bracing and tough-minded, brimming with a rare generosity that never seems drippy or forced." — Ken Tucker, Entertainment Weekly

"Disarmingly casual, unexpectedly serious, alert to his predecessors and mentors in literature and in life, Best American Poetry series editor Lehman has produced a seventh book of uncommon variety. Some poems consider writing itself, as inspiration, as vocation, as business—'That's the thing about ambitious middle-aged writers/ who used to be young: each has a secret problem,/ and if they confess it, they think it will advance/ their careers.' Others seek the informality that Lehman's readers have come to expect. The Jewish content promised by the title arrives in force late in the volume, as the title poem cuts between Lehman's remembered childhood and his adult meditations on heritage and the Holocaust: 'I feel as if my real life is somewhere else, I left it/ back in 1938.' (Lehman's mother, who speaks the prose epilogue, describes her life as a child in Vienna and as a refugee.) Lehman, who lives in New York, remains alert to many styles and forms; as a poet he has often followed in the tracks of Kenneth Koch and Frank O'Hara. The title poem, leaving those influences behind, will seem to some readers flat and without style, to others as personal and as profound as anything Lehman has written." — Publishers Weekly

"Lehman is perhaps best known as the series editor of The Best American Poetry, but he has had a long and varied career, as a poet, professor (at the New School), and prose writer. He comes both to bury (Signs of the Times: Deconstruction and the Fall of Paul de Man) and to praise (The Last Avant-Garde: The Making of the New York School of Poets), and he does it all with energy and verve. For much of his career, he has been nibbling around the edges of the subject of the Jews in America, and in 2009 he finally chomped down, hard, releasing both a nonfiction book on American Jewish songwriters and Yeshiva Boys, a collection of his most personal and probing poems to date…. Lehman is our best academic wag since John Hollander or, more to the point of his concerns, John Berryman…. His wit is barbed, sometimes even rebarbative, but more often searching and honest.… ‘Yeshiva Boys,’ the title poem and beating heart of the book, is Lehman’s most ambitious and successful long poem yet…. ‘Yeshiva Boys’ is well worth the effort of reading this book on its own and will stand as one of the hallmarks of Lehman’s career." — Margot Lurie, Commentary