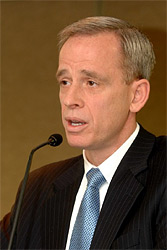 LIBERTY'S NEMESIS: THE UNCHECKED EXPANSION OF THE STATE (with John Yoo View Bio)