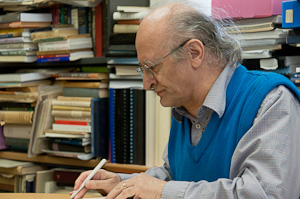 The Max Cooper Professor of Jewish Thought at Hebrew University in Jerusalem, Moshe Idel has served as a visiting professor and researcher at universities and institutions worldwide, including Yale, Harvard, and Princeton universities in the U.S., and Ecole des Hautes Etudes en Sciences Sociales in Paris

He is the author of more than fifteen books, and the winner of a number of awards and prizes, including the EMET Prize, given by the Prime Minister of Israel; the Koret Prize for Jewish Thought; the Gershom Scholem Prize for Research in Kabbalah, given by the Israeli Academy for Sciences and Humanities; the Present Tense/Joel H. Cavior Literary Award for Religious Thought; and the Jewish National Book Award.

Shahar Arzy is the director of the Computational Neuropsychiatry Lab at the Faculty of Medicine at Hebrew University, Jerusalem and a senior neurologist at the Department of Neurology, Hadassah Hebrew University Medical Center.