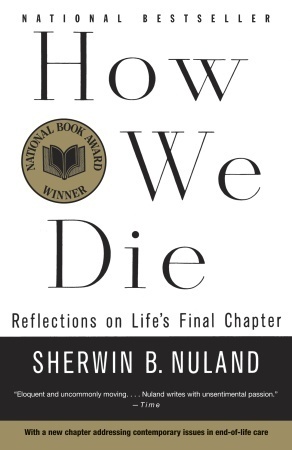 "You cannot read How We Die without becoming aware of your body, if only...to ask it impermissible questions. You put the book down merely to pick it up again." — The New Yorker

"There is compassion, and often wisdom, on every page." — San Francisco Examiner

"The story comes from a sensitive observer...who has seen much, taken much thought, and written it all down with a superior gift for descriptive narrative." — Washington Post Book World

"Rarer still, we come across an author with both style and substance, who gives us information that is a pleasure to read and from which we have much to learn—or relearn. When that material is combined with the wisdom of experience, we rejoice in the art and craft of medicine at its finest. Nuland's book will occupy a permanent place on the short shelf of such classics. Buy it, read it, recommend it to your patients." — Journal of the American Medical Association (JAMA)

"Powerfully eloquent.... How We Die is a relentlessly frank and graphic description.... surprisingly absorbing." — The New York Times

"Engrossing.... We are in the hands of a remarkable portraitist." — The New York Times Book Review

"Eloquent and uncommonly moving reflections.... Nuland writes with unsentimental passion. He has the rare ability to explain the abstruse in language that can be both meticulously exact and wondrously evocative." — Time

"Any reader who is still not convinced of his own mortality...is bound to be altered in some profound way by this book.... This is knowledge we all should have." — USA Today

"Nuland is an exceedingly wise and experienced physician, who draws on a lifetime’s clinical experience; a scholar and historian who draws on all of Western literature; and a deeply sensitive (and, one feels, vulnerable) human being, who draws on many personal experiences of observing the dying of family and friends, and the sense of their loss. These three voices—the clinical, the historical, and the personal—all blend to produce a narrative, a series of portraits or analyses of dying, as powerful and sensitive, and unsparing and unsentimental, as anything I have ever read. I found this a formidable book—I could read only a little at a time. Nuland argues passionately against two of the evils of our times—the medicalization of dying (and of endless intervention) and the opposite, its eroticization and mythologization. Having read this book, I find my perspectives have altered—I have fewer illusions about dying, but also less fear." — Oliver Sacks, M.D.

"Everyone over the age of fifty should have this book, which tells us exactly what diseases may afflict us as we age, how we recognize them, and what to do about them. This doctor has done us a service by being so clear, so honest, and so unsentimental." — Doris Lessing

"Dr. Nuland is a sensitive, thoughtful and articulate physician. In this sensitive and even passionate consideration of some of the major causes of death in our society he has brought together a remarkable mix of clinical accuracy, epidemiologic fact and a clear call for all of us to be informed. His candor forces us to examine the realities of the process of dying, but his compassion leavens and softens the message he brings us. We owe Dr. Nuland a very great debt." — Jeremiah A. Barondess, M.D., President, New York Academy of Medicine

"In a remarkable feat of alchemy, Dr. Nuland has taken some technical and potentially depressing material and transformed it into a moving, readable and truly important book. Every doctor and every patient should read it." — Rabbi Harold S. Kushner

"Enthralling. It’s an original idea to look at death like this as if it were just another part of life, which indeed it is. The book ought to be frightening but it isn’t because Sherwin Nuland manages to make fascinating what is most terrifying and therefore entirely distracts us from the ‘I don’t want to know, I don’t want to think about it’ attitude. Curiously, as we read, we do want to know, and instead of being shocked we become more and more interested." — Ruth Rendell

"A wealth of wisdom and experience presented in a wise and kindly voice. The stories echo in the mind long after reading. They are beautifully told." — Richard Selzer, M.D.

"This is indeed a rare book. I do not recall ever reading a description of the final chapter of life that so eloquently describes the various ways in which death approaches. Dr. Nuland offers important and insightful vignettes that are both moving and hopeful. It is a book that all physicians and medical students should have in their library." — James P. Nolan, M.D., Regent, American College of Physicians and President of the American Association of Medical Professors

"A shattering book: filled with pain, yet brimming with humanity. It’s impossible to read How We Die without realizing how earnestly we have avoided this most unavoidable of subjects—how we have protected ourselves by building a cultural wall of myths and lies. I don’t know of any writer or scientist who has shown the face of death as clearly, honestly, and compassionately as Sherwin Nuland does here." — James Gleick