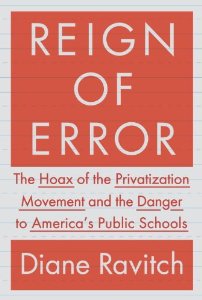 From the former U.S. Assistant Secretary of Education, "whistleblower extraordinaire" (The Wall Street Journal), one of the foremost authorities on education and the history of education in the United States, author of the best-selling The Death and Life of the Great American School System; The Language Police ("Impassioned.... Fiercely argued.... Every bit as alarming as it is illuminating"—The New York Times); and the now-classic Great School Wars: A History of the New York City Public Schools—an incisive, comprehensive look at today's American public schools that argues persuasively against those who claim our public school system is broken, beyond repair, and obsolete; an impassioned but reasoned call to stop the rising "privatization movement" draining students—and funding—from our public schools, a book that puts forth a detailed plan of what needs to happen to schools and with public policy to insure the survival of this American institution so basic to our democracy.

In Reign of Error, Ravitch makes clear that, contrary to the statements being made about disastrous public school test scores and graduation rates, these figures are the highest they've ever been in history—and that dropout rates are at their lowest, this according to the National Assessment of Educational Progress, a no-stakes test for children of all races.

Ravitch puts forth a chapter-by-chapter breakdown of what can be done to preserve public school education, making clear what is right with our education system, how policy makers are failing to address the root causes of educational failure, and discussing in detail how to fix these problems.

"Ravitch takes on almost all the well-known private-sector leaders and political officials—among them are Arne Duncan, Joel Klein, Bill Gates, Wendy Kopp, and Michelle Rhee—who have given their encouragement, or barrels of their money, to the privatizing drive. It isn't likely they’ll be sending her bouquets. Those, on the other hand, who have grown increasingly alarmed at seeing public education bartered off piece by piece, and seeing school teachers thrown into a state of siege, will be grateful for this cri de coeur—a fearless book, a manifesto and a call to battle." — Jonathan Kozol, The New York Times Book Review

"For readers on all sides of the school-reform debate, this is a very important book." — Booklist (starred review)

"A noted education authority launches a stout defense of the public school system and a sharp attack on the so-called reformers out to wreck them. We’ve been misinformed, writes Ravitch, about the state of our public schools. Test scores are higher than ever, the dropout rate is lower, and achievement gaps among races are narrowing. The only 'crisis' is the one ginned up by government bureaucrats, major foundations, an odd coalition of elitists and commercial hustlers intent on privatizing education. They’ve made inflated claims about the virtues of vouchers, charter schools, virtual schools, standardized testing (and its efficacy for identifying excellent teachers) and merit pay. With no supporting evidence, they insist poverty has no correlation to low academic achievement, that abolishing tenure and seniority will improve schools, and that overhauling the entire system along business lines is the way to go. Ravitch makes her own proposals for genuine improvement, and if they are as unsurprising as they are expensive—e.g., prenatal care for all expectant mothers, high-quality early education for all, reduced class sizes and a full, balanced curriculum, medical and social services for poor children—they at least leave responsibility for the public school system where it belongs: in the hands of our elected representatives. When it comes to education, notoriously plagued by fads, it’s always difficult to determine truth. Ravitch, however, earns the benefit of the doubt by the supporting facts, figures, and graphs she brings to her argument, a lifetime of scholarship, and experience in and out of government. She’s as dismissive of George W. Bush’s No Child Left Behind as of Barack Obama’s Race to the Top and as critical of former Secretary of Education William Bennett as of the current Arne Duncan. For policymakers, parents and anyone concerned about the dismantling of one of our democracy’s great institutions." — Kirkus Reviews

"Ravitch offers a vital nonpartisan critique of the policies of George W. Bush, Barack Obama, and the school privatization movement. Backed by abundant data, she distinguishes between these policies and their enactment, which demands that students master achievement tests, while educators face decreased funding, firings, and school closures. Meanwhile, unprecedented amounts of tax dollars flow into private charter school chains. Ravitch convincingly analyzes the rhetoric of Michelle Rhee, Bill Gates, and other private/public school-choice advocates, whose campaigns and lobbying efforts for charter schools have created a network of corporations funneling millions of earmarked educational dollars into administrative salaries, rents, test-prep consultants, and textbook publishers. As Ravitch argues, the mission of public education—preparing young people to take part in a democracy—cannot be fulfilled by competition between private corporations and public schools to increase test scores in reading and math at the expense of other subjects. Her practical solutions include a return to localized school control, early-childhood education for all, better teacher training, mentoring, and retention, as well as better achievement metrics for students and teachers. Categorizing current policy as 'educational malpractice,' Ravitch concludes with the suggestion that 'protecting our public schools against privatization and saving them for future generations of American children is the civil rights issue of our time.'" — Publishers Weekly