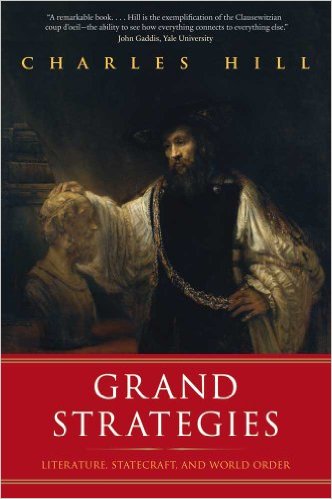 “In an age of short attention spans and disaggregated facts, Charles Hill does much to revive two venerable traditions—the classical ideal of statesmanship, and the close engagement with great texts.”—Henry A. Kissinger

“A fascinating book that has the feel of a life’s work….  Hill affirms the intellectual endeavor of looking at the world through a literary lens…. At a deeper level, the book is about the fragility of order and the struggle of statesmen to balance, restrain, and legitimate state power.”—John Ikenberry, Foreign Affairs

“Grand Strategies concerns statesmanship and strategy: the uses of power, the fate of alliances, war and peace. It also, happily, provides a tour through the Great Books, giving special attention to nation-states and their vexed relations.”—William Anthony Hay, The Wall Street Journal

“Charles Hill’s Grand Strategies is a gem that combines long and valuable practical experience with the wisdom that comes from a broad and deep knowledge of history, literature and philosophy to produce a wisdom badly needed by statesmen and diplomats.”—Donald Kagan, Yale University

“A triumph of intellectual unification. Ranging globally through history and literature, Hill brilliantly demonstrates how certain key issues have driven grand strategy and statecraft from ancient to post-modern times.”—Arthur Waldron, author of The Great Wall of China: From History to Myth

“Charles Hill’s clear-headed and erudite exploration of the world’s literary heritage on the subject of statecraft and the state system opens wide vistas for understanding the past and future of international affairs. This is a convincing and much-needed statement of the essential importance of the humanities in preparing the leaders of the future.”—Norman M. Naimark, Stanford University

“Charles Hill’s Grand Strategies transcends the tired categories of realism and idealism in the study of politics. Drawing from such as Aristotle and Homer, he spans centuries and circles the globe, always gazing from the standpoint of greatness. A sage and powerful book.”—Harvey Mansfield, Harvard University

“Charles Hill’s Grand Strategies makes an invaluable contribution to the field of international studies. Hill understands that the conduct of diplomacy and international politics requires wisdom and creative choices in the face of the complexities of geopolitics and the dilemmas of foreign policy. His book restores historical understanding and philosophical depth to a field which seemed to have abandoned both.”—Braz Baracuhy, Survival

"A truly masterful synthesis of ‘Literature, Statecraft and World Order’, in the words of the subtitle. Hill has drawn from a career in diplomacy, a thorough grounding in classical and modern philosophy and a rich appreciation of great literature to produce a kaleidoscopic masterpiece that illuminates all it surveys…. Hill puts before the reader a prefatory list of works cited, one containing every book central to the Western canon from Homer onward, plus a few more…. His purpose is to address the largest themes of history through the literature that both reflects and has contributed to the understanding of humanity’s ultimate political circumstances." —Edward N. Luttwak, The American Interest

“A remarkable book…. Hill is the exemplification of the Clausewitzian coup d’oeil—the ability to see how everything connects to everything else.”—John Gaddis, Yale University