How the Athenians and Spartans Fought the Peloponnesian War 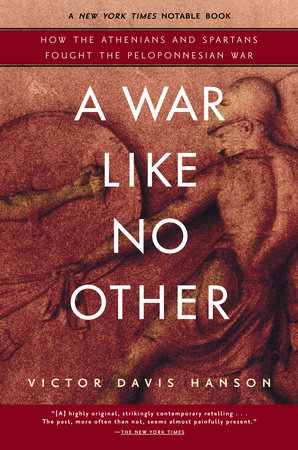 (amazon)
A New York Times "Notable Book of the Year"

"The 'war like no other,' as Thucydides called it, continues to fascinate because it always seems pertinent, and never more so than in Victor Davis Hanson's highly original, strikingly contemporary retelling of the superpower confrontation he calls 'a colossal absurdity.' . . . His ingeniously organized narrative proceeds chronologically, but also thematically. . . . The specifics of naval and land battle account for many of the book most compelling pages." — William Grimes, The New York Times

"Hanson presents an elegant, lucidly written analysis of the 27-year civil war, a 'colossal absurdity,' that ended in Athens's 5th-century B.C. loss to Sparta and the depletion of centuries of material and intellectual wealth. Hanson deftly chronicles these destructive decades, from the conflict's roots (e.g., the fundamental mutual suspicion between Athens and Sparta) to its legacy (the evolution of the nature of war to something 'more deadly, amorphous, and concerned with the ends rather than the ethical means'). Hanson considers the war's economic aspects and the ruinous plague that struck Athens before delving into his discussion of warfare. He offers a tour de force analysis of hoplite (or infantry) combat, guerrilla tactics, siege operations and sea battles in the Aegean. Though landlocked Sparta ultimately brought down Athens's once-great naval fleet and replaced democracy with oligarchy by 404 B.C., Hanson complicates the received notion of a lost Hellenic Golden Age. Throughout this trenchant military and cultural history, he draws parallels between the Peloponnesian War and modern-day conflicts from WWII to the Cold War and Vietnam. Across the centuries, these are lessons worth remembering." — Publishers Weekly

"A well-crafted tale of ugly little battles in faraway places, as newsworthy and compelling today as it was in 400 B.C. . . . A fine example of ancient history made vivid for modern readers." — Kirkus Reviews

"Hanson has written a first-rate chronicle, capturing the intensity and savagery of ancient warfare and conveying how ordinary warriors must have experienced it. Hanson has a gift for explaining both strategic objectives and relatively complicated tactical maneuvers in terms easily understandable by laymen. In his portrayals of some of the key players, Hanson provides interesting insights, especially concerning some rather obscure but important figures. For general readers and history buffs who hope to gain a solid understanding of this seminal and tragic conflict, this is an ideal." — Booklist

"Victor Davis Hanson is that near-oxymoron, a celebrity classicist. A scholar of great originality and insight, he has also cast himself as the modern Machiavelli, offering advice to his country's leaders that is drawn unabashedly from the ancient past. Prior to September 11, Hanson had been tireless in launching charges against the serried ranks of his fellow classicists, skewering them for their failure ‘to explain the importance of Greek thought and values in an age of electronic information, mass entertainment and crass materialism.’ Post-September 11, he emerged as one of the most readable columnists in the US media, robustly—indeed militantly—in favour of the war in Iraq. So effectively did his talk of Greek civic virtues contribute to the political weather that he was even summoned to the White House to sup with President Bush. Having insisted to his colleagues in classics departments that the ancient world could be made relevant to those far beyond the universities, even his enemies—of which there are legion—can hardly deny that Hanson has triumphantly proven his case.

All of which will make his new book, A WAR LIKE NO OTHER, of great interest to those concerned with modern America as well as with ancient Greece. Its subject is the Peloponnesian War, the savage three decade-long struggle between Athens and Sparta that ended with the ruin of Athenian imperial greatness, and which did indeed appear, to those who lived through it, a calamity without parallel. Yet there is simultaneously a knowing irony about the title, for in warfare, as in so much else, the Greeks set the pattern for the West's future—a notion that Hanson has explored with considerable brilliance throughout his work. As he points out, it was the stated goal of Thucydides, the great historian of the conflict, to make his theme ‘serve as a lesson for what can happen to any people in any war in any age.’ So it was, during the last century, that Thucydides' narrative of universal war, of newspeak and class hatred, of terrorism, revolution and genocide, appeared all too bleakly contemporary. So it is too, in a new century, and amid the raging of a new war, that Thucydides still haunts the corridors of power in America.

This equation of Athenian civilisation with American is not one that Hanson harps upon, but it is a shadow that lies across his whole book, and it gives to his prose a vivid and unsettling immediacy. Most histories of the Peloponnesian War tend towards the bloodless—but not Hanson's. Rather, it is a work of great compassion and human sympathy…. Horrors stalk its pages. Organised, not as a conventional narrative, but by themes, the chapters have titles such as ‘Terror’, ‘Fire’ and ‘Disease’. Hanson's trademark ability to convey the sheer nightmarish quality of classical warfare is consistently on display. Brain-damaged plague-survivors shamble like zombies through the streets of a besieged Athens; prisoners-of-war are jabbed and lashed to death by their jeering captors; ignorant armies are swept with confused alarms of struggle and flight. The Athenian programme of exporting democracy is shown to be quite as brutal and self-serving as the Spartan defence of oligarchy. The very term ‘Peloponnesian War’, Hanson argues, ‘appears a misnomer. A far better name might be ‘The Thirty Years Slaughter.’

The result is a book that is the very opposite of gung-ho polemic. Whereas in his journalism Hanson appears to evince an unshakeable confidence in the justice both of his own and of America's civilising mission, A WAR LIKE NO OTHER suggests an altogether more troubled perspective. Indeed, so painful is his portrait of Athens' downfall, the story of a great democracy that expended its treasure and reputation upon a disastrous overseas adventure, while succumbing to a militarist clique back at home, that I would never have imagined, had I not been a reader of Hanson's journalism, that its author was an enthusiast for the war in Iraq. Perhaps, then, Victor Davis Hanson can be accounted America's Kipling as well as her Machiavelli: a proud and pugnacious patriot who nevertheless dreaded, in his most private moments, where his own country's greatness might lead. 'Lest we forget—lest we forget!'" — Tom Holland, Daily Telegraph (London)

"A WAR LIKE NO OTHER can be read as an elaborate excursus on the work of Thucydides, performed by Victor Davis Hanson, a former professor of classics who has made himself one of our premier military historians…. This study demonstrates the care of an avid, meticulous scholar whose learning can be worn lightly because it's so assured. He has also become a formidable journalist in recent years, which has prompted him to produce prose that is starkly appealing, direct and accessible to the common, curious reader…. Hanson performs the difficult feat of not talking down to readers while still presuming no prior knowledge of the war. Although an understanding of Greek history of the 5th and 4th centuries B.C. will certainly quicken one's pace, Hanson provides helpful appendices for the uninitiated or the rusty, identifying key terms, places and characters. His copious notes, written to inform and not to impress, will also fill in many gaps. " — The Washington Post