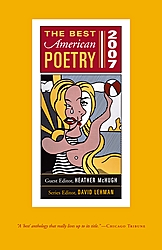 "The 20th volume in America's most popular annual poetry anthology series is perhaps the most esoteric. McHugh, an unusual poet herself, who says she is “Fond of the textures of a text, the matter of a letter,” has tried to assemble what she feels is a cohesive anthology rather than simply a gathering of favorite poems from this past year's literary magazines. As ever, some familiar names—former editors and famous poets—appear: John Ashbery, Billy Collins (“Who has time for sunlight falling on the city”), Robert Creeley, Louise Glück, Robert Hass, Robert Pinsky, Galway Kinnell. But there are also a number of representatives, such as Rae Armantrout and Christian Bök (“selves we woo/ we lose// losses we levee/ we owe”), from off-center traditions. A few of the newbies tend toward the experimental, such as Ben Lerner and Danielle Pafunda: “Do he & he have a big muscle in the arm from the aiming?” All and all, this is a riskier than usual volume, though also full of familiar pleasures. Certainly it attests to poetry's continuing vitality." — Publishers Weekly (starred review)