Everything Explained That Is Explainable

On the Creation of the Encyclopaedia Britannica's Celebrated Eleventh Edition 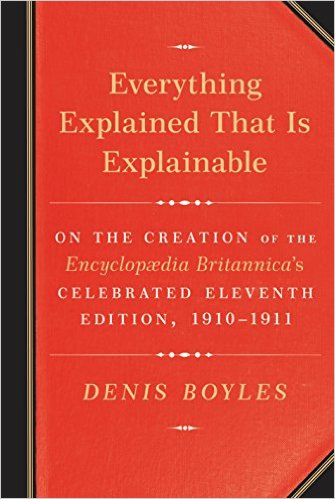 The 11th edition of the Encyclopedia Britannica, published in 1910-11, is the most famous English-language encyclopedia in history. The opposite of Wikipedia, the EB11, as it is known, is a testament to the value of credentialed expertise. It was the last of the great scholarly encyclopedias, the one that brought its post-Victorian readers the world's greatest authorities on practically everything. Its credibility was supreme, its writing fascinating and engaging, sometimes beautiful. Nearly a century later, journalists, novelists, poets and essayists continue to prize the 11th edition as their favorite general reference work, one not meant to be simply used, but to be read with pleasure.

Denis Boyles tells the amazing story of this atlas of human brilliance, a massive 29-volume, 44-million word anthology of some of the best essays written in English. It is the story of how Horace Everett Hooper—a volatile, self-assured, impulsive, and optimistic American, an autodidact and natural-born salesman—got into the book business at age 16, moved to the western frontier and on to Chicago, and became hugely successful. With a brilliant ad-man named Henry Haxton as his partner, he went about buying publishing rights to the Encyclopedia Britannica, a work incredibly distinguished by entries from Charles Darwin, Thomas Malthus, Sir Walter Scott, David Ricardo, William Hazlitt and John Locke (some, like Benjamin Franklin's entry on electricity, extending back to the first edition published in Edinburgh in 1768). Incredibly distinguished, but selling only 600 copies a year in Britain in its 9th edition, the Encyclopedia Britannica was on the brink of financial collapse.

"In a highly readable style, nicely seasoned with occasional ironic touches, Denis Boyles limns the intricate business negotiations that went into the creation of the Eleventh Edition…. Mr. Boyles provides excellent portraits of the key figures responsible for the 19th- and early-20th-century editions of Britannica. His last chapter is given over to the Eleventh's mishandling, owing to its having been a work of its time, of such key, and in our day super-sensitive, subjects as Women, African-Americans, Native Americans, Asians, Arabs and its difficulties with Catholic and Protestant readers. None of this finally diminishes the overall accomplishment that is Encyclopaedia Britannica's Eleventh Edition." — Joseph Epstein, The Wall Street Journal

"A definitive and meticulously researched chronicle of the creation of the Encyclopædia Britannica's Eleventh Edition, published in 1910-1911. That edition comprised 44 million words and 29 volumes, an unprecedented publishing achievement that Hans Koening in The New Yorker called 'the last great work of the age of reason.'" — Donald Liebenson, Chicago Tribune

"How grit and determination created an encyclopedia for the modern world. In the 1890s, the Encyclopedia Britannica, then in its Ninth Edition, and the prestigious Times of London both were losing money. Critic and editor Boyles focuses on a pair of audacious American bookmen, Horace Everett Hooper and Henry Haxton, who hatched a plan to revive the fortunes of both eminent publications. They would use the newspaper to sell the encyclopedia by barraging readers with ‘bombastic, full-page and direct-mail marketing,’ a form of advertising that the staid Times had never seen. For Hooper, promoting the encyclopedia was more than a way to make money: an idealist and anglophile, he saw the encyclopedia as ‘a tool for making the world a better, more civilized place by supporting his romantic vision of an English-speaking elite.’ He aimed, he said, ‘to make the Britannica self-sustaining and give it to Britain as a national trust.’ By the time the two men launched their plan, it was clear that the Ninth Edition was quickly becoming outdated. Scientific, technological, social, and political changes mandated new material, so they decided to produce supplemental volumes, hiring as editor respected journalist Hugh Chisholm, ‘a man of the world as well as a scholar.’ Throughout his tenure, the heroic Chisholm served as ballast to ground Hooper's wild enthusiasms. Boyles traces the evolution of the Britannica and the fate of the Times through lawsuits, battles for ownership, and ongoing money woes involving colorful, earnest, sometimes eccentric characters. It all culminated in the majestic 11th Edition: 40,000 long, erudite, yet accessible articles written by a huge number of renowned contributors. Boyles focuses mostly on the business end; his look at content is illuminating.... A well-researched, brightly told history of the men and women who saved a great compendium of knowledge." — Kirkus Reviews

"Boyles’s account of how this classic reference work came to be published in 1910-1911 makes for enthralling business history" — Michael Dirda, The Washington Post