Or, The Whole Art of Storytelling 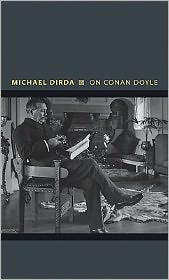 A passionate lifelong fan of the Sherlock Holmes adventures, Pulitzer Prize-winning critic Michael Dirda is a member of The Baker Street Irregulars--the most famous and romantic of all Sherlockian groups. Combining memoir and appreciation, On Conan Doyle is a highly engaging personal introduction to Holmes's creator, as well as a rare insider's account of the curiously delightful activities and playful scholarship of The Baker Street Irregulars.

Because Arthur Conan Doyle wrote far more than the mysteries involving Holmes, this book also introduces readers to the author's lesser-known but fascinating writings in an astounding range of other genres. A prolific professional writer, Conan Doyle was among the most important Victorian masters of the supernatural short story, an early practitioner of science fiction, a major exponent of historical fiction, a charming essayist and memoirist, and an outspoken public figure who attacked racial injustice in the Congo, campaigned for more liberal divorce laws, and defended wrongly convicted prisoners. He also wrote novels about both domestic life and contemporary events (including one set in the Middle East during an Islamic uprising), as well as a history of World War I, and, in his final years, controversial tracts in defense of spiritualism.

On Conan Doyle describes all of these achievements and activities, uniquely combining skillful criticism with the story of Dirda's deep and enduring affection for Conan Doyle and his work. This is a book for everyone who already loves Sherlock Holmes, Dr. Watson, and the world of 221B Baker Street, or for anyone who would like to know more about them, but it is also a much-needed celebration of Arthur Conan Doyle's genius for every kind of storytelling.

"It isn't often that I have sat and read 45,000 words nonstop. But like an old-style bookman, Michael Dirda is both erudite and deeply entertaining. He reminds us that Arthur Conan Doyle was not just the creator of the most famous character in modern literature, but also one of the finest writers of the Victorian and Edwardian periods. Packed with critical insights and personal observations, On Conan Doyle may be a small book but it deserves a very large audience." — Michael F. Whelan, head of The Baker Street Irregulars