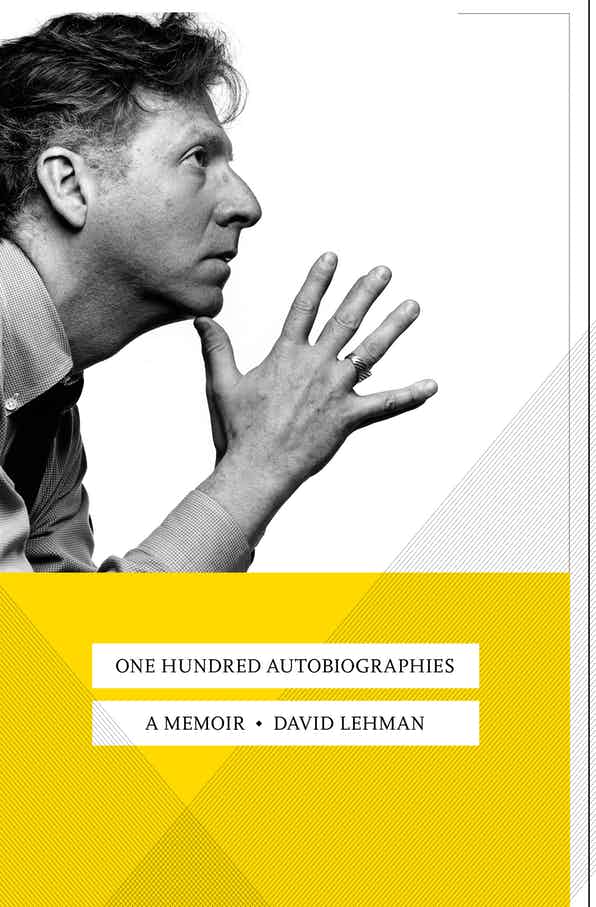 In One Hundred Autobiographies, poet and scholar David Lehman applies the full measure of his intellectual powers to cope with a frightening diagnosis and painful treatment for cancer. No matter how debilitating the medical procedures, Lehman wrote every day during chemotherapy and in the aftermath of radical surgery. With characteristic riffs of wit and imagination, he transmutes the details of his inner life into a prose narrative rich in incident and mental travel. The reader journeys with him from the first dreadful symptoms to the sunny days of recovery.

This "fake memoir," as he refers ironically to it, features one-hundred short vignettes that tell a life story. One Hundred Autobiographies is packed with insights and epiphanies that may prove as indispensable to aspiring writers as Rilke's Letters to a Young Poet.

Set against the backdrop of Manhattan, Lehman summons John Ashbery, Kenneth Koch, Edward Said, and Lionel Trilling among his mentors. Dostoyevsky shows up, as does Graham Greene. Keith Richards and Patti Hansen put in an appearance, Edith Piaf sings, Clint Eastwood saves the neighborhood, and the Rat Pack comes along for the ride. These and other avatars of popular culture help Lehman to make sense of his own mortality and life story.

One Hundred Autobiographies reveals a stunning portrait of a mind against the ropes, facing its own extinction, surviving and enduring.

Finalist for the 2019 INDIES Book of the Year Awards!

"While learning this spring that the coronavirus was taking a disproportionate toll on men, I was reading David Lehman’s account of his bladder cancer, a disease that also disproportionately afflicts men. His brilliantly circumspect 2019 memoir, One Hundred Autobiographies, reminded me that a conventional model of masculinity inhibits some men from expressing their emotional responses to assaults on the body. An accomplished poet, editor and scholar, Mr. Lehman exhibits grace under the pressure exerted by disabling treatments. He thereby provides insight into the benefits and liabilities of masculine reticence about disease. Like him, quite a few men may judge it unmanly to discuss medical procedures that can unman them. Is this stoicism empowering or disabling? In One Hundred Autobiographies, Mr. Lehman informs us that he is telling and not telling his cancer story…. Mr. Lehman explains in the book that he does not want to 'make cancer the sun around which the rest of the planets revolve.'… While the downside of this approach means we don’t learn much about bladder cancer, the upside means we learn a good deal about Mr. Lehman: about his immigrant parents, who met in New York City after fleeing the Nazis; his observant upbringing in the Inwood section of Manhattan; his education at Columbia University; his famous mentors and friends—Lionel Trilling, John Ashbery, Kenneth Koch, Edward Said—as well as his favorite travels, songs, jokes, movies, authors and sports teams. It is intriguing to get acquainted with an artist-critic who has shaped the contemporary poetry scene since 1988 as the founder and series editor of the annual anthology The Best American Poetry." — Susan Gubar, The New York Times  (Read the full review)

"Poet and critic Lehman, who was treated for bladder cancer in 2014, brilliantly captures the despair, uncertainty, and anger he felt in these 100 short reflections on life, death, and writing. Likening his ordeal to the plot of a novel, he declares, “the road connecting memory and desire is not linear... one lesson of any brush with death is that time is finite.” He muses on why he writes: “I write to assert my will to live. To prove I exist.” Throughout, he reflects on literature and pop culture figures to tell his story: arriving at the hospital for treatment wearing his fedora, Lehman recalls the movie Some Came Running and Dean Martin’s hat, “which he wears even in bed, even in a hospital bed.” After reading John Milton’s Paradise Lost, Lehman ponders the concept of evil: “the real question is not whether you believe in god as such but whether you believe there is such a thing as evil.” In his final reflection, being in excellent health—though, like many cancer patients, he acknowledges that this might just be a reprieve—he advises that “even on bad days, there are pleasant hours,” and “it is amazing how much pain the body can withstand.” Lehman’s exquisite essays illustrate the ways that beauty can flow out of pain." — Publishers Weekly (starred review)

"A book of nonfiction by one of our best poets—David Lehman’s One Hundred Autobiographies: A Memoir. While in throes of fighting cancer, Lehman wrote every day he could, as a way of imaginatively affirming his existence and escaping the terrible ordeals of pain, dread, and emotional chaos. First of all figuring out a formal strategy, as expert poets do, Lehman then crafts a brilliant, inventive portrait of a mind, in language in which everything counts. The book’s moral seriousness and theological and ancestral powers provide extreme aesthetic pleasure—Lehman’s forms of language are forms of life, always life. One Hundred Autobiographies teaches and instructs its fortunate readers, like all great literature, which it is. –" — Lawrence Joseph, Lit Hub

"There have been many cancer memoirs, by both those gripped with the disease and by their caregivers; some dwell on science, others on emotions; they project hope, grief and loss in different configurations. Lehman’s memoir pulses with life and memory." — Sandee Brawarsky, The New York Jewish Week  (Read the full review)

"David Lehman’s One Hundred Autobiographies is the tale of his many lives, told with wit, insight and the gifts of a natural storyteller. While illness forces him to confront his own mortality and to recall the people and events who shaped him, there is no shutting out the banal soundtrack of everyday life. David is an eloquent, playful seeker of the truth who, when that treasure is too well hidden to be found, will settle for a good joke for the time being but never give up the search." — Robert Siegel, former host, "All Things Considered," NPR

"The poet, journalist and editor David Lehman began his cancer diary to honour a vow—or perhaps a dare.... Its hundred entries, ironically bearing titles such as 'Execution Poem Expert', 'Tropic of Cancer', 'Time is on My Side', and 'Recovery Room', are aslant and witty.... Familiarity with the cancer ward is not a prerequisite for dipping into David Lehman’s many lives." — Beverley Bie Brahic, Times Literary Supplement  (Read the full review)

"The micro-essays in David Lehman’s compelling book display a lively mind and livelier imagination in mortal combat with a frightening, debilitating illness. That Lehman wins this battle is no surprise. Neither is his unconquerable allegiance to the healing power of putting words together." — Robert Wilson, Editor, The American Scholar

"During the ordeal, I shunned self-help books that talked about cancer as a 'journey.' But encouraged by Stacey, my wife, I wrote every chance I could, in any venue, in longhand on my pocket pad or at the keyboard on my desk computer at home. What I wrote began as a journal and turned into a sort of cancer memoir, but an unconventional one that is full of stories, memories, dreams, songs, jokes, fictions, fantasies, speculations, confessions, protests, and religious meditations. I wanted to write a book that would please my readers, even those reluctant to read about a disease and the patient’s progress through it." — an interview with the author, Stay Thirsty Magazine  (Read the full review)