America in the Middle East, 1776 to the Present 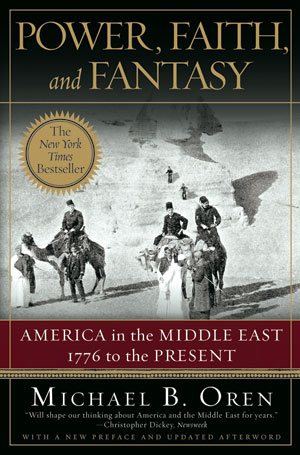 Drawing on thousands of government documents and personal letters, featuring original maps and more than 60 photographs, this book covers more than 230 years of history. POWER, FAITH, AND FANTASY is an indispensable work for anyone interested in understanding the roots of America's Middle East involvement today.

"We often hear that Americans know little about other nations; a bigger problem is that we know too little about ourselves, our history and our national character…. So when a brilliant, lucid historian such as Michael B. Oren does bring the past back to life for us, revealing both what has changed and what has stayed the same, it is a shaft of light in a dark sky. Today, the conventional view is that George W. Bush took the United States on a radical departure when he declared a policy to transform the Middle East and that, as soon as he leaves office, U.S. policy will return to an alleged tradition of realism, rooted in the hard-headed pursuit of tangible national interests. This is both bad history and bad prophecy, as Oren shows in POWER, FAITH, AND FANTASY, a series of fascinating and beautifully written stories about individual Americans over the past four centuries and their contact with Middle Eastern cultures…. Three powerful themes emerge from his tales: that from the Founders onward, Americans have repeatedly tried to transform Arab and Muslim peoples—politically, spiritually and economically—to conform to liberal and Christian principles; that since the days of the Puritans, many Americans have been obsessed with the idea of ‘restoring’ Palestine to the Jews; and that from the colonial era to the present, many (and perhaps most) Americans have regarded Islam as a barbaric, violent, and despotic religion. Whether these purposes and perceptions have been intelligent or misguided, based on reality or fantasy, Oren shows that they have been the dominant features of our foreign policy tradition in the Middle East…. Many today may want to disagree, but they will have to wrestle first with the long history of American behavior that Oren has so luminously portrayed." — Robert Kagan, The Washington Post Book World

"POWER, FAITH, AND FANTASY is hugely ambitious, drawing on hundreds of original sources to create a finely balanced overview of this enormously complex subject.... Yet it is a diverting tale...full of forgotten twists and memorable characters.... Oren cleverly weaves them into the overarching themes of his title." — Max Rodenbeck, The New York Times Book Review

"This engrossing, informative, and frequently surprising survey of U.S. involvement in the Middle East over the past 230 years is particularly timely. Oren, a contributor to the New York Times, Wall Street Journal, and New Republic, illustrates that American interests have frequently combined elements of romanticism, religious fervency, and hard-headed power politics. In the early nineteenth century, President Jefferson, perhaps acting against his own instincts to remain aloof from the affairs of the Old World, sent the infant American navy to confront the Barbary pirates off the coast of North Africa. Like many of our future endeavors in the region, the results were a mixture of success, failure, and farce. Other episodes covered here that are particularly interesting include previously obscure American efforts to locate the source of the Nile and the efforts by American missionaries to convert vast numbers of Ottoman subjects. But Oren is at his best when describing American involvement in the twentieth century as the U.S. replaced Britain as the dominant ‘imperial’ power in the area. Appealing to both scholars and general readers. " — Booklist

"A landmark achievement. This is an absolutely vital work that will change the way Americans look at their role in the Middle East and beyond. The story is riveting and the research encyclopedic." — Walter Russell Mead, Council on Foreign Relations

"Not only a terrific read, but also proof that you don't really understand an issue until you know its history." — Niall Ferguson, author of Colossus: The Rise and Fall of the American Empire