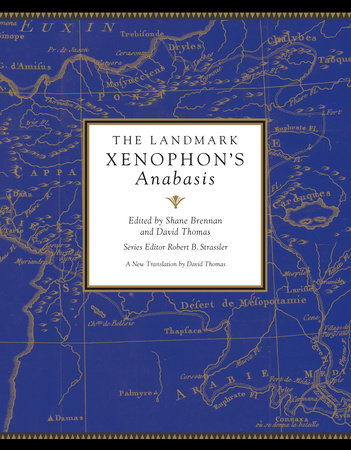 (amazon)
The ancient classic Xenophon’s Anabasis —also known as The March of the Ten Thousand or The March Up Country—is one of the greatest true-life adventure stories ever recorded, and this translation brings it newly to life on the page. The narrative tells of ten thousand Greek soldiers stranded deep in hostile Persia, their commander dead. Xenophon was appointed as one of their leaders, and he chronicled the harrowing journey as he led the “marching republic” north to the Black Sea. As with the other volumes in the Landmark series, this edition—edited by Shane Brennan and David Thomas—supplements the text with detailed maps and annotations that place the work in historical context.
With its stunning endpapers and enlightening illustrations, this beautifully produced, large-format hardcover features copious illuminating annotations and maps as well as illustrations.

"Comes packed with the Landmark series’ trademark commentary and scholarly analysis. Lengthy footnotes supplement each passage, highlighting the traditional summaries of the text compiled by scribes over the ages. This edition features helpful maps too, for students unfamiliar with the distance and geography of the ancient world’s city-states. The copious illustrations include photographs of artifacts, such as pieces of Thracian armor, and of Greek ceramic art depicting battles and Hoplites in their gear. The appendices shed further light on what we know about Xenophon and his relation to Socrates, among other in-depth revelations about Anabasis. The translated prose reads easily and rolls from passage to passage quickly, while the edition’s scholarly material brings secondary sources into one tremendous research springboard. The book ends with a glossary and an extensive list of sources cited, which serves as a starting point for further research. History, literature, and classics departments will be grateful for this edition’s supplementary teaching and research material." — Library Journal