To Rule the Waves

How the British Navy Changed the Modern World 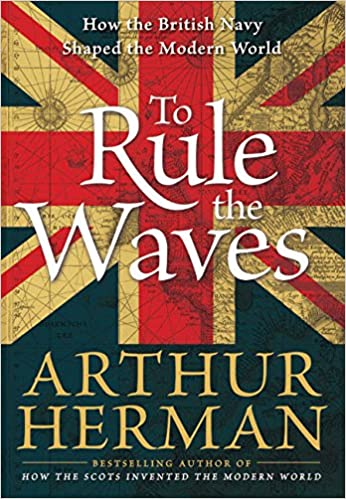 "The author of How the Scots Invented the Modern World returns with this quite splendid history of the British Royal Navy.... His thesis is that the British Empire was the foundation of the modern world and the Royal Navy the foundation of that empire.... He sustains that thesis in a fluent narrative that stretches from the Elizabethan Age to the Falklands War. Although definitely Anglocentric and navalist, the author has done his research on a scale that such a large topic requires. The Royal Navy's discipline and food in the age of sail may not deserve quite as much rehabilitation as he gives them, but on the other hand, he is frank about the limitations of British warship design, poor Victorian gunnery and lack of preparations for antisubmarine warfare between the world wars. He also writes extremely well, whether dealing with the role of the Royal Navy in founding the British iron and steel industries (it was a major customer) or grand battles, such as Quiberon Bay (1759) or Trafalgar (1805). Good one-volume histories of one of the modern world's most vital fighting forces appear rarely; this one should rule for a while to come." — Publishers Weekly

"Herman manages to tell the extraordinary story of the Royal Navy and its impact on modern history in a single compelling volume.... Herman has written a marvellous book.... A colourful, fast-paced narrative." — Daily Telegraph (London)

"Herman vividly recounts the dramatic saga of how 'a navy forged a nation, then an empire — and then our world.' To Rule the Waves is an extremely readable account of the rise and fall of the Royal Navy." — Washington Post Book World

"[Herman's] excellent history combines thrilling accounts of battles like those brought to the big screen in 'Master and Commander,' with a terrific strategic analysis. Herman reminds us that the sea unites distant and far away lands, and today over 95% of international trade is by sea.... To Herman, the decisive moment for the British came when they realized that, far from being vulnerable filaments connecting the home country and its colonies, the sea united the two. As long as the Royal Navy ruled it, Britain could prosper.... Herman also demonstrates how Britain's maritime character was bound up with traditions of democracy, limited government and free trade. Maintaining large standing armies (to protect borders) necessitated the creation of a massive government bureaucracy and an authoritarian state. Navies were more technological, requiring fewer men (hence less government control) but better economic organization.... Above all, Herman argues that by guaranteeing free use of the sea, the Royal Navy first made Britain an economic superpower, and then made the decisive contribution to the world economic boom of the 19th century, which carried over even into the 20th." — New York Post

"A rousing history.... The rise of the navy and the road to empire supplies Mr. Herman his subject, and he does it justice, weaving together, in a fast-paced narrative, the political, economic, technological and military developments that transformed ‘a motley collection of pirates, adventurers and courtiers' into an invincible fighting force.... He is particularly adept at explaining the changes in technology and battle tactics ahead of the competition. Even more impressive, he describes the evolution of the navy's bureaucracy in such dramatic fashion that Samuel Pepys, secretary to the admiralty, becomes as stirring a figure as Horatio Nelson." — The New York Times

"Unlike many of the great empires of the nineteenth century or those of antiquity, the British empire was not based upon contiguous territory. With their imperial possessions separated by vast oceans and large landmasses, it was essential for the British to develop and maintain a mighty navy to supply and exploit the empire's resources. Herman, who has been a professor of history and the coordinator of the Western Heritage Program at the Smithsonian, writes a stirring account of the origins and evolution of the British navy. He also presents convincing arguments that illustrate that many of the broad strategic goals pursued by the British continue to be pursued by American geopolitical strategists today. This is an exciting chronicle filled with colorful characters and enthralling adventures; some of these men, such as Francis Drake and James Cook, are already imperial icons, but Herman also relates stories and exploits of more obscure but equally compelling figures who helped establish and preserve the greatest maritime empire in history." — Booklist

"The contributions of the British fleet extend beyond the inventive use of rum, sodomy, and the lash. The British Empire, argues Herman, would scarcely have been possible without it, and 'half the world's independent nations would not exist today.'... There's plenty of courage and endurance here. Herman's ...narrative ought to please fans of Aubrey and Hornblower-and even the Tudor kings." — Kirkus Reviews

"We are now as eager as Macaulay's and Hume's readers once were for works of history that teach us how free states evolve and explain why they prosper. No historian has been more ingenious in meeting this demand than Arthur Herman. In his last book, How the Scots Invented the Modern World, Herman brought to life the Scottish Enlightenment, a movement whose importance was previously obscured by opaque monographs of the academic specialists who make it their study. Although the Scottish Enlightenment has never enjoyed the éclat of the French Enlightenment, Herman showed that the Scottish sages — Hume, Smith, Lord Kames, Dugald Stewart — made the more benificent contribution to the cause of human freedom. They explained, in a fresh and captivating way, why the British system of political economy worked. In his new book, To Rule the Waves, Herman turns to another institution that contributed no less vitally to the spread of liberal order: the British navy.... The record of Her Majesty's navy will continue to inspire as long as men take it into their heads to go to sea, and is recounted with style and mastery in this excellent book." — National Review

"Largely a narrative of derring-do by such captains as Francis Drake and Thomas Cochrane. But Mr. Herman also devotes a fair amount of space to the navy's shore establishment. Readers who think of Samuel Pepys merely as a noted 17th-century diarist will be surprised to encounter him here as a dedicated bureaucrat who helped the Royal Navy keep pace with the Sun King's ambitious shipbuilding program. Mr. Herman also mixes in a generous amount of geopolitical context." — The Wall Street Journal

"To Rule the Waves is a riveting story told by a masterful historian." — Victor Davis Hanson, Los Angeles Times

"To Rule the Waves charts a record of success, often, and especially latterly, achieved against the odds. It takes in four centuries, from the defeat of the Spanish Armada in 1588 to victory over Spain's latter-day descendants in the Falklands War of 1982. underlying these epsodes is a deeper story of 'how a single institution, the British Navy, built the modern global system', of how 'a navy forged a nation, then an empire -- and then our world'." — London Times Literary Supplement