Ghost on the Throne 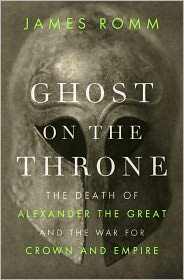 June 10, 323 B.C., would turn out to be a devastating date for the fortunes of the world.  On that day, Alexander the Great, at the height of his powers and only 32 years old, died in Babylon, leaving behind no heirs or possible successors except an unborn child and a mentally defective half-brother.  Asked on his deathbed to whom his vast empire should pass, he uttered three words that would translate into three decades of global upheaval:  “To the strongest.”  All of Alexander’s top generals (the Diadochi, or "successors") considered themselves “strongest,” and these men – brilliant tacticians, backed by cadres of battle-hardened troops – would tear one another to pieces in the years to come, turning much of the ancient world into collateral damage as they fought. Alexander’s stunning achievement, a world united into a single empire, died from the wounds they dealt it; but a new world emerged, a world fractious nation-states and struggles to dominate the Mideast – in short, the template of our own times.  Indeed, events of recent years have painfully driven home the relevance of this story:  On the same Mesopotamian battlegrounds once bloodied by Alexander’s generals, we have once again seen how a collapse in central authority can lead to chaos, upheaval, and a war of all against all.

Ghost on the Throne chronicles the death of Alexander and the five years that followed, a time when most of the known world, from Alexander’s Greek homeland as far east as modern-day Pakistan, was sucked into the maelstrom created by an immense power vacuum. Its chapters move between widely varying locales of this multinational, multiethnic epic so as to capture the global scope of events, allowing the reader to watch the shock wave of Alexander’s death radiate outward from Babylon to the fringes of his empire.

This tale of a world suddenly rendered leaderless at a moment of profound change, and then nearly destroyed by the mutual hatreds and suspicions among those who succeeded to power, will have a powerful impact not only on history buffs but on all readers concerned with the uncertainties of a suddenly destabilized global order.

"James Romm (editor of the magnificent The Landmark Arrian: The Campaigns of Alexander) dives right in with the conviction that although these might be messier tales, they're still really good ones and well worth telling. The effort lives or dies according to the author's abilities not just as a detail-sifting historian but as a storyteller. Romm succeeds marvellously. He's mastered the knack that all classicists should have: he can get inside the sources and bring them alive for a non-specialist audience. When he talks about the Somatophylakes, Alexander’s elite Bodyguards (hard, pragmatic men like Ptolemy, Perdiccas, and Leonnatus), soldiers who’d 'waded through rivers of blood' in their pursuit of Alexander's conquests, he's being as literal as figurative speech can get, and he's quick to establish the tension behind the dizzying stakes of the youthful conqueror's last days, when almost every one of the men around him saw himself as the sole best suited to take over…. Although the story has less visceral allure than the golden myth of Alexander's swath across the world, it's easily a more important story nevertheless—and in James Romm it has a teller well worthy of your attention. This is history every reader should know, and this is exactly how it should be written." — Steve Donoghue, Open Letters Monthly

"Romm tells the gripping tale of the breakup of Alexander the Great’s far-flung but ephemeral empire. The author sets the scene vividly…. Romm is a gifted storyteller as well as a respected scholar, and he knows that compelling history is driven by considerations of character.... Highly recommended." — Choice

"Engaging…. Romm charts all the reversals and alliances with the consummate skill of a great detective." — Nick Owchar, Los Angeles Times

"Romm’s Ghost on the Throne is the thrilling story of the paths these claimants followed in the years after Alexander’s death. Its action resembles nothing as much as a film noir, played out on the open expanses of the modern Middle East, the Balkans, and North Africa. Double-crossings, femmes fatales, hired guns, and dirty money are the order of the day. And this is not to mention the man-eating crocodiles, man-trampling elephants, and a poison-filled mule’s hoof. Romm is professor of Classics at Bard, a discipline more commonly given to scholarship as dry as the clay on the British Museum’s tablet. But he turns out to have quite a gift for the hardboiled…. [The book] has the briskness of a screenplay and is organized as a series of brief scenes, most of them introduced by the date, location and the major players: ‘Aristotle at Athens, 323,’ ‘Ptolemy in Egypt, 322,’ and so on. These little inter-titles prove indispensable, since I simply cannot exaggerate how complicated the aftermath of Alexander’s reign was—and its complexity is only exacerbated by the state of the sources…and it is a marvel to watch how judiciously Romm navigates them.… Bringing the sources into artful alignment—affirming one account here, dismissing another there—takes expert eyes, and Romm clearly has them. For all its lurid details, then, Ghost on the Throne is emphatically not ancient pulp, but a careful work of fine scholarship. And not merely on the minor—but crucial—questions about the trustworthiness of various sources, but also, more importantly, on the geopolitical questions that Alexander’s massive empire raised.… It binds an otherwise mind-boggling narrative into a skillfully coherent whole." — Brendan Boyle, The New Criterion

"In this fast-paced and absorbing account, Romm chronicles the political intrigues and military conflicts of the half-dozen generals who struggled for power after Alexander the Great's death in 323 B.C.E. The goal for each was control over an empire stretching from the Danube to the Indus. Because Alexander left no will or obvious successor, his seven closest friends--the Bodyguards--fought not only to preserve Alexander's Macedonian empire but also among themselves to mark out territory to rule. Drawing deeply on sources such as Plutarch's Lives and the anonymous The Lives of the Ten Orators, Romm brings to life the Bodyguards and their struggles to maintain their territories. As Romm points out, five of the Bodyguards placed crowns on their own heads, creating five royal dynasties to replace the one they had lost. A decade after Alexander's death a new multipolar political order had emerged, one marked by rivalry, shifting alliances, and long-running, small-scale conflicts. Captivating...a sterling account of a little discussed era in ancient history." — Publishers Weekly

"What became of Alexander's stunning accomplishments and his vision of a vast, unified empire? Ghost on the Throne illuminates the dark mysteries and personal motivations that swirled in the turbulent, little-studied era ushered in by Alexander's untimely death in Babylon. In Romm's gripping, detailed account, we watch the tragic drama unfold, as the young leader's closest companions become vicious rivals, shredding Alexander's grand dream amid blood and paranoia." — Adrienne Mayor

"In his gripping new Ghost on the Throne, James Romm adds the narrative verve of a born writer to the erudition of a scholar. Taking what until now had been a murky gray area of ancient history that was once the province of specialists—the eventful, convoluted, and bitter struggles for power immediately following the death of Alexander the Great—Romm has crafted a richly colored, expertly narrated page-turner. For too long, the immense spreading shadow of Alexander himself has overshadowed the careers of those around him: Romm’s new account now alters that balance, providing unforgettable, darkly-glinting cameos of the dead conqueror’s generals, friends, and relatives—most of them grasping, some memorably hapless—among whom figure a startling array of remarkable female players in this ‘Macbeth’-like drama. A wonderful book for anyone interested in history, power—or just an amazing tale." — Daniel Mendelsohn