A Way of Being 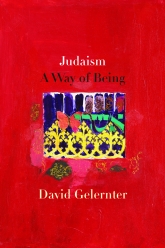 This remarkable book by the distinguished scholar David Gelernter seeks to answer the question:  What is Judaism really about?

Gelernter views Judaism as one of humanity's most profound and sublimely beautiful achievements. But because Judaism is a way of life rather than a formal system of thought, it has been difficult for anyone but a practising Jew to understand its unique intellectual and spiritual structure. Gelernter explores compelling questions, such as:  How does Judaism's obsession with life on earth versus the world-to-come separate it fundamentally from Christianity and Islam?  Why do Jews believe in God, and how can they after the Holocaust?  What makes Classical Judaism the most important intellectual development in Western history?  Why does Judaism teach that, in the course of the Jewish people's coming-of-age, God moved out of history and into the human mind, abandoning all power but the capacity to talk to each person from inside and thereby to influence events only indirectly?  In discussing these and other questions, Gelernter seeks to lay out Jewish beliefs on four basic topics—the sanctity of everyday life; man and God; the meaning of sexuality and family; good, evil, and the nature of God's justice in a cruel world—and to convey a profound and stirring sense of what it means to be Jewish.

"A sweeping meditation on Jewish spirituality and belief…. JUDAISM is a visual tour of Jewish life, an attempt to conjure 'the grand scheme' of the Jewish religion. It is perhaps Gelernter's most ambitious work to date. The slender book, which includes several glossy reprints of Gelernter's paintings, is structured around a series of images that shade into themes…. In JUDAISM, Gelernter zeroes in on four 'image-themes'—separation, veil, perfect asymmetry, and inward pilgrimage…. JUDAISM is a strange book…. But the book is also a deeply lyrical, even sensual, accounting of Gelernter's own faith." — Evan R. Goldstein, The Chronicle Review

"A wide-ranging book about the beliefs, practices and philosophy of the world's first monotheistic religion—a book that Jews and non-Jews alike will find well worth reading. Mr. Gelernter is not shy about explaining why everyone should care about Judaism. It is, he writes, 'the most important intellectual development in western history.... It has given morals and spiritual direction to Jewish, Christian, and Muslim society.'" — Jay Lefkowitz, The Wall Street Journal