The Lives of the Constitution 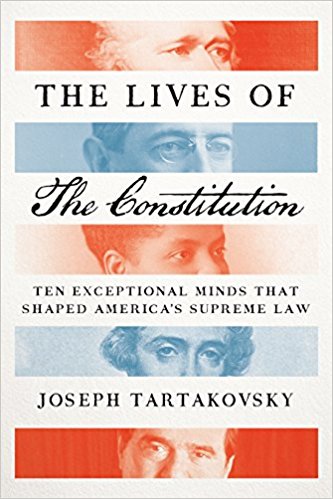 In a fascinating blend of biography and history, Joseph Tartakovsky tells the epic and unexpected story of our Constitution through the eyes of ten extraordinary individuals: some renowned, like Alexander Hamilton and Woodrow Wilson, and some forgotten, like James Wilson and Ida B. Wells-Barnett.

Tartakovsky brings to life their struggles over our supreme law from its origins in revolutionary America to the era of Obama and Trump, from settings as diverse as Gold Rush California to the halls of Congress.  His book is crowded with a vivid, almost Dickensian cast, as Tartakovsky shows how America’s unique constitutional culture grapples with questions like democracy, racial and sexual equality, free speech, economic liberty, and the role of government.

He chronicles how Daniel Webster sought to avert the Civil War; how Alexis de Tocqueville misunderstood America; how Robert Jackson balanced liberty and order in the battle against Nazism and Communism; and how Antonin Scalia died warning Americans about the ever-growing reach of the Supreme Court.

From the 1787 Philadelphia Convention to the clash over gay marriage, this is a grand tour through two centuries of constitutional history as never told before, and an education in the principles that sustain America in the most astonishing experiment in government ever undertaken.

"Tartakovsky looks at the U.S. Constitution through the lives of nine men and one woman. He creates five pairs of individuals from different periods, each consisting of a well-known and lesser-known figure…. Tartakovsky's choices are intriguing. Avoiding legal jargon and sketching vivid, memorable portraits of his subjects, the author offers a scholarly yet accessible book to general audiences. VERDICT: A thoughtful, clever work on how different generations have thought about the Constitution. Well worth the time of American history and law students." — Michael Eshleman, Library Journal (starred review)

"Tartakovsky has written a very good book in The Lives of the Constitution…. He has offered a fascinating and lively way to recast the nation’s founding document…. Tartakovsky is well served by his ability to communicate important points with an enviable brevity and directness…. It is a credit to Tartakovsky that he has reminded us of the vitality of our founding document in such a novel and unassuming way." — Jay Cost, National Review

"So if you want to intelligently discuss the latest constitutional issues triggered by the current administration, then you need to understand the people behind the provisions — which is where a notable new book, The Lives of the Constitution by Joseph Tartakovsky, comes in.... [He has] tackled the topic of the Constitution and its history with learning, patriotism, and intensity." — David Lat, Above the Law