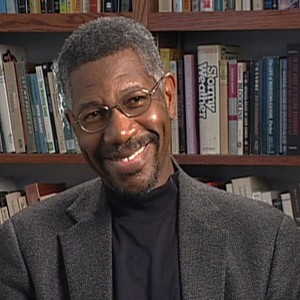 Gerald Early is the Merle Kling Professor of Modern Letters and Director of the Department of African-American Studies at Washington University in St. Louis, where he also is a professor of English, of African & African American studies, and of American culture studies. He is a noted essayist and critic.

Early is the author of The Culture of Bruising: Essays on Prizefighting, Literature, and Modern American Culture, which won the 1994 National Book Critics Circle Award for criticism. The book was Early's sequel to his first volume of essays, Tuxedo Junction: Essays on American Culture, which was published in 1989. Other books he has written are One Nation Under a Groove: Motown & American Culture (1994) and Daughters: On Family and Fatherhood (1995), which chronicles the everyday challenges and triumphs of fatherhood. Daughters was a semifinalist for the National Book Critics Circle Award in 1995.

He is the editor of numerous volumes, including This Is Where I Came In: Black America in the 1960s (2003); The Sammy Davis, Jr. Reader (2001); Miles Davis and American Culture (2001); The Muhammad Ali Reader (1998); Body Language: Writers on Sport (1998); and Ain't But a Place: An Anthology of African American Writings About St. Louis (1998). He also edited My Soul's High Song: The Collected Writings of Countee Cullen and two volumes of Speech and Power: The African-American Essay in Its Cultural Content.

In 1993, Early edited Lure and Loathing: Essays on Race, Identity and the Ambivalence of Assimilation, which was named the "Outstanding Book" on the subject of human rights in North America by The Gustavus Meyer Center.

He has been nominated twice for a Grammy Award in the Best Album Notes category for Yes I Can! The Sammy Davis Jr. Story (2000) and Rhapsodies in Black: Music and Words From the Harlem Renaissance (2001). A fellow of the American Academy of Arts and Sciences, has been a regular commentator on National Public Radio's "Fresh Air." He also served as a consultant on Ken Burns' documentary films on baseball and jazz, which both aired on PBS.

In 1988, Early received a $25,000 Whiting Writer's Prize and a $5,000 General Electric Foundation Award for Younger Writers. His work was included in The Best Essays of 1986, edited by Elizabeth Hardwick, and in subsequent volumes in that series. In October 2006, Early received the Phi Beta Kappa Award for Distinguished Service to the Humanities. A native of Philadelphia, Pa., Early received a bachelor's degree from the University of Pennsylvania in 1974, a master's degree from Cornell University in 1980, and a doctorate from Cornell in 1982, all in English literature.

LURE AND LOATHING: Essays on Race, Identity, and the Ambivalence of Assimilation (Viking Penguin, 1993)